“Academic Work is Important for Society” – 2020 Voltaire Prize recipient Dr. Gábor Polyák on the prize and the work that followed 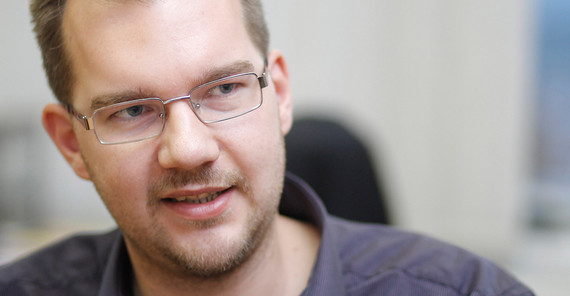 Photo : Csortos Szabolcs
Voltaire Prize recipient Dr. Gábor Polyák
In January 2021, the University of Potsdam will award the Voltaire Prize for Tolerance, International Understanding and Respect for Differences” for the fifth time. Every year, the university awards this prize, financed by the Friede Springer Foundation and worth EUR5000, to a person who has exhibited commitment to the freedom in research and teaching as well as to the right of free expression. As of now, young researchers can be nominated for the 2021 Voltaire Prize. In this interview, 2020 Voltaire Prize recipient Dr. Gábor Polyák talks about the meaning of the prize from his point of view and the effects it had on him.

What effects did the prize have on you?

Above all, it provided me with new motivation for my work. This helps a lot in countries where research as a contribution to public and academic debates has lost much of its importance and where civil societies are not seen as discussion partners. Apart from that, the winner of the Voltaire Prize cannot be greeted with great joy in his home country. The prize is not only a great recognition for the laureate, but also a clear message for the country and the political situation there. The congratulatory words are spoken softly. My acceptance speech was published in “Die Welt” and, as a result, became a part of the European debate about Hungary. I received the most positive feedback from German colleagues and journalists.

One direct consequence was the fact that Friede Springer forged a link between the publishing company Ringier Axel Springer and me. Together we are thinking about developing a magazine or a news platform reporting on public affairs in Hungary for young readers in an understandable way. Because the most important condition for a more stable future democracy is, in my opinion, the political and democratic awareness of today's youth.

What kind of research are you doing at the moment?

I am writing a book chapter that aims to make terms such as state, democracy, elections, distribution of power, etc. understandable for young people – using a story set in the world of Star Wars. These projects are not of enormous academic value, but they do reach the most important target group for the future of democracy.

I am also working on a research project entitled “Truth and Credibility”. Its goal is to show which legal, self-regulating and other specialized political framework conditions are necessary to enable credible, truthful communication on digital platforms.

With my NGO, Mertek Media Monitor, we have initiated cooperation with NGOs from Romania, Slovakia and the Czech Republic. Together we will publish a comparative analysis of the different forms of indirect censorship in the Eastern European region. This is intended to reveal state interventions that distort public discussion in the media without using conventional censorship.

Why should one nominate academics for the Voltaire Prize?

In the social sciences in particular, there is a danger that academic work will become an end in itself. The value of our work is determined solely by indices based on academic metrics, but they completely disregard its social impact. The Voltaire Prize is an important confirmation of the fact that academic work is still important for society.

Nominate a young researcher who has made an important contribution to the social dialogue on peace, international understanding and tolerance or who has stood up for freedom in research and teaching or the right to free speech. All information about the nomination of a candidate can be found on our website.