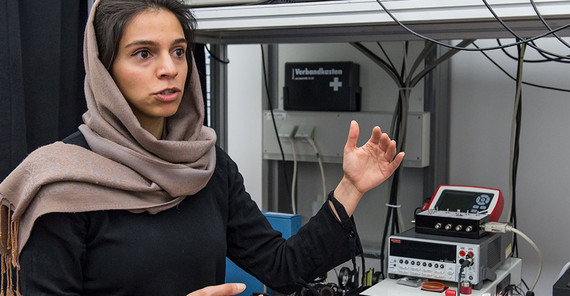 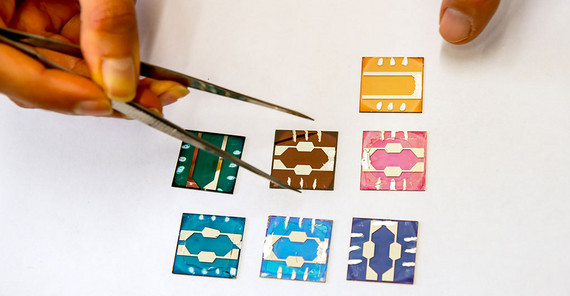 Photo : Karla Fritze
Prof. Dr. Safa Shoaee
Photo : Karla Fritze
Sample plates coated with different organic semiconductors have different colors. Thanks to their physical properties the can be used for a wide range of applications - for example in solar cells.
The solar cells of the future are made of organic material as they can be produced very inexpensively using printing technologies. Physicists at the University of Potsdam are investigating what properties these materials must have in order to achieve particularly efficient and long-lasting systems.

Optical lenses, mirrors, detectors, cables, and all kinds of technical devices: In Prof. Safa Shoaee’s lab they are arranged in a complicated experimental setup. This apparent mess, however, follows strict rules. At the heart of the experiment is a plate the size of a memory card. Its surface is coated in a bluish violet film made from an organic semiconductor material. The mysterious name of the substance is PM6: Y6. It has a property that makes it particularly interesting for Shoaee - it can convert light into energy. The researcher is interested in the underlying physical processes.

The Iranian physicist has been working with organic materials for solar cells for 13 years. The Sofja Kovalevskaja award winner has worked as a scientist at the University of Potsdam since 2016. Her work at the university is funded by the Humboldt Foundation for five years. She shares her interest in organic solar cells with her host Dieter Neher, Professor of Soft Matter Physics. “Safa Shoaee brings special expertise to our working group,” he says. They each focus on a different aspect of their field of research, complement one another and in doing so arrive at completely new findings. Clean energy at a reasonable cost - that is the ambitious goal of their joint research.

“Organic semiconductors are very versatile,” Shoaee explains. “They can be used in solar cells, photodetectors, sensors, or LEDs.” On the table in front of her are sample plates coated in a variety of these materials, their colors ranging from blue to pink to yellow. They all mainly consist of carbon, hydrogen, and oxygen. Their color not only makes them a potentially attractive material for architects, who could integrate organic solar cells in the facades and roofs of buildings, but it also shows which color spectrum of visible light the respective material can use to generate energy. However, they are still inferior to the most commonly used inorganic silicon cells - which are always dark gray and quite heavy in comparison to organic cells: Although they absorb light better, they generate less energy and are less stable.

Safa Shoaee and her team are working on these flaws. With her experiments, she would like to find out how the chemical structure of the materials relates to their optoelectronic properties, which covalent bonding or combinations of elements ensure that light energy is captured particularly efficiently and converted into electrical energy. The results of her work are important for chemists who can produce substances with the desired properties. Step by step, physicists and chemists are jointly designing the basic building blocks for future solar cells.

Lifespan and quantity are crucial

When light hits organic material, it initiates a whole series of complex physical processes, in which the negatively charged electrons are excited to higher energy levels, separated from the positively charged holes created in the process and ultimately transported to the electrodes. The research focus of Neher and Shoaee complement each other perfectly: They each investigate different aspects of the separation and transport of the charges created by light.

The two events frame the time period that is crucial for energy production: The lifespan of the resulting charges must be as long as possible in order for them to be transported out of the active layer to the adjacent electrodes.  Only then can electricity flow. In this case, “long” means just a few microseconds. In Potsdam, Shoaee has developed a new method to capture this short time period. This requires hours of measurement in the laboratory. Meanwhile, rows and columns of numbers line up endlessly on the computer monitor. In the end, the researchers receive two values that tell them whether the material is suitable for organic solar cells: the lifespan and the number of charges. In addition, physical models that support the creation of new materials are developed from the data measured on various semiconductors.

Optimal optoelectronic properties alone, however, are not sufficient to successfully use organic semiconductors in solar cells. In order to be competitive on an industrial scale, it must be possible to produce them quickly and inexpensively. Organic materials already have a key prerequisite for this. “They can be dissolved in solvents and printed over a large area,” explains Shoaee. Printing thin polymer layers is a well-established method and extremely fast compared to other coating processes. To avoid short circuits, the active organic layers of the printed solar cells have to be several hundred nanometers thick. Although this is still thinner than a single hair, there is a problem with the short lifespan of the photogenerated charge carriers: the thicker the layer, the more the charge carriers are lost on the way to the electrodes. Shoaee and her team are researching how they can optimize the crucial optoelectronic parameters to minimize these losses.

Physicists are constantly gaining new knowledge about materials that have so far not been well researched. Many of them behave physically differently from previously known systems. Although the learning curve has been steep, there is still a long way to go to find an organic solar cell that works as well as a silicon cell. “PM6: Y6 has some very good properties, but it is not yet perfect,” says Shoaee, who is working persistently to clarify and optimize the physical processes in the solar cells. In any case, the potential of organic materials is enormous, a fact on which Shoaee and Neher can both agree, and their research is paving the way for their future use.

Prof. Safa Shoaee studied physics at the University of Manchester and physical chemistry at Imperial College London. Since 2016, the Sofja-Kovalevskaja Award Winner has been working at the University of Potsdam and is establishing her own research group in the field of optoelectronics.
Mail: shoaiuuni-potsdampde

Prof. Dieter Neher studied physics at Johannes Gutenberg University of Mainz. Since 1998, he has been Professor of Soft Matter Physics at the University of Potsdam.
Mail: neheruuni-potsdampde