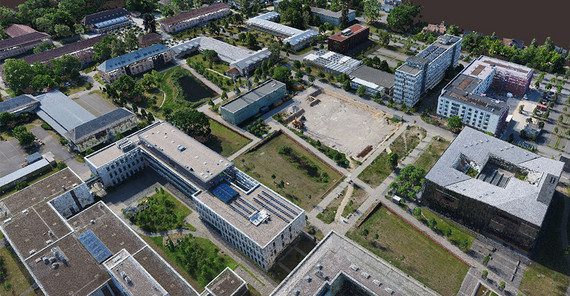 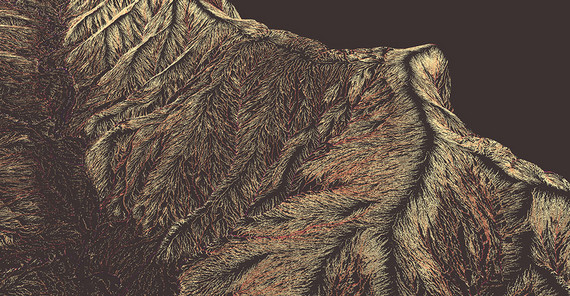 Photo : Prof. Dr. Bodo Bookhagen
Point cloud image of the Golm Campus
Photo : Prof. Dr. Bodo Bookhagen
Point cloud image of Santa Cruz Island
One of the most popular gifts for Christmas: unmanned aerial vehicles, colloquially known as drones. They are widely used in the hobby sector today. Yet drones are more than just toys: In the sciences, for example, they are increasingly important. They can be used to monitor the tree population in forests or to localize animals. Geoscientist Bodo Bookhagen, Professor of Geological Remote Sensing at the University of Potsdam, has been using drones in his research work for years – and is discovering new fields for applying them all the time.

Researchers want to literally get a new perspective on the world from a bird's eye view. Drones enable them to observe the earth from the air at a height of 20, 50, or 100 meters. Thus, they close the gap between measurements on the surface of the earth and observation of the earth from airplanes at a height of several thousand meters. The aim of the geoscientists is to create high-resolution digital terrain models and aerial photos that enable the analysis of soil and plants. “With drone recordings, we can measure the vegetation cover very precisely, count trees, and indirectly determine their CO2 uptake.” Knowledge of the biomass condition, for example, helps to better fight forest fires or even to predict them. This is particularly important for the forested state of Brandenburg, as the recent very dry and hot summers have made clear.

Drones can also be used to examine geological structures and processes. Where does water flow? Where can water pond during extreme rainfall? Questions that can be answered by using drones when researching natural hazards. The researchers use a method that creates spatial coordinates and three-dimensional models of the surface from several overlapping photos. “This results in different three-dimensional perspectives on the surface and enables us to create exact terrain models,” says Bookhagen. Such terrain models, in turn, help to determine flow directions and possible narrow sections before an extreme event.
Modern remote sensing, as it is practiced by geoscientists with drones, uses, among other things, so-called point clouds. A point cloud is a set of data points with an unorganized spatial structure - their distance varies from a few millimeters to decimeters. These points can be calculated from the photos. Bookhagen’s working group analyzes such point clouds and works on methods for their automatic evaluation. The data contains information on biomass, terrain structure, water content, or models to predict landslides.

The Potsdam researchers use the drones during their research stays around the globe. In Argentina, for example, the geoscientists work closely with colleagues from Buenos Aires, Salta, Jujuy, and Tucumán to understand the specific surface dynamics in the Andes. “There, we investigated changes in nature that suggest imminent landslides. We also created high-resolution terrain models of so-called earthquake rupture zones,” Bookhagen says. Thanks to the drones, the researchers are now able to precisely document and analyze these processes.

Bookhagen usually uses the drones as carrier systems for optical and geoscientific measurement technology. He equips them, for example, with various sensors that produce high-resolution photos. Thermal cameras can measure the temperatures on the earth’s surface, which in turn allows conclusions about the degree of soil moisture. In collaboration with Prof. Rajiv Sinha from the Indian Institute of Technology Kanpur, the researchers perform measurements in the Indian Ganges basin and in the Himalayas. The results of this cooperation, which is funded as part of an Alexander von Humboldt Research Group Linkage Program, are used, for example, to predict forest fires or monitor irrigation in agriculture. Effective irrigation of fields is highly relevant to locals given climate change and increasing water scarcity. Up until a few years ago, only measuring stations collected such data selectively, i.e. on a very limited area. Today, researchers are able to use drones to measure large areas quickly, extensively, and very accurately. “Drone-based measurements are comparatively simple and at the same time at a larger scale than point measurements. This has a huge potential that has not been exhausted,” says Bookhagen.

Missions from Potsdam to Namibia

Together with ecologist Dr. Niels Blaum from the University of Potsdam, they also make drone recordings in Namibia to determine the biomass of the savannas. The evaluation focuses on the analysis of seasonal differences, which are observed with regularly repeated recordings of the plant structures. The high-resolution data also help to find animal paths. This can help, for example, to better adapt protected areas to the habitats of wildlife. Research on natural hazards is on the agenda in Namibia, too. Bookhagen and his colleagues use drones to determine the flood risk, particularly in the dry valleys. This is where the risk of flash floods after extreme rainfall is particularly high. In the dry season, the geoscientists use the drone aerial photos to determine the grain size distribution and number of river pebbles in a defined area. After a flood, on the other hand, they measure the aggradation in river areas, i.e. the deposition of sediment due to the floods. Both data, the size of the pebbles and the amount of material transported, are crucial parameters for determining the risk to people and infrastructures along the dry valleys.

But the drones of the Potsdam researcher not only fly in far-away lands. In regional cooperations, for example with the Prussian Palaces and Gardens Foundation Berlin-Brandenburg and the City of Potsdam, they help to count trees or classify tree species.
The use of drones in so-called archeometry is relatively new. Bookhagen and his institute colleague Prof. Jens Tronicke equip the drones with geophysical sensors. The combination of optical aerial photographs and geophysical measurements makes it easier to identify old city walls or settlements. Bookhagen and Tronicke are working on innovative methods to combine and improve the use of drones and geophysical instruments. They hope that these methods can also be used to detect contaminated sites - a task that is still pending, especially in the state of Brandenburg. It was often not possible to enter burning areas during the large forest fires in summer 2019 because old ammunition from World War II and the GDR was suspected there. Drone-based mapping using geophysical methods could help to locate such ammunition, which often has a metal case.

To be able to complete all these tasks, it is not enough to simply buy the drones online that are designed for the hobby sector. Although commercially available drones can be used as carrier systems, the special geophysical sensors that have to be mounted also require a lot of ingenuity from the researchers. In addition, the geoscientists worked on methods to determine the position of the drones in the air with an accuracy of a few millimeters. Commercial providers have also significantly improved the stability of the drones during flight. “In the past, we had to realign the drone every time after gusts of wind. Thanks to automatic flight control, this is no longer necessary. The drone follows the path we ‘enter’' and corrects itself.” But Bookhagen still sees room for improvement. He and his colleagues from the research focus Earth and Environmental Systems at the University of Potsdam are therefore considering building a test site for the scientific use of drones.

Prof. Bodo Bookhagen studied geology, geophysics, and IT in Potsdam. Since 2014, he has been Professor of Geological Remote Sensing at the University of Potsdam.
Mail: bodo.bookhagenuni-potsdamde