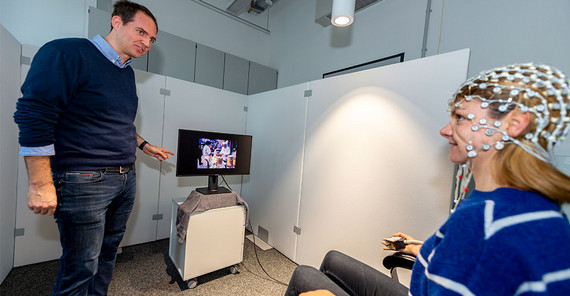 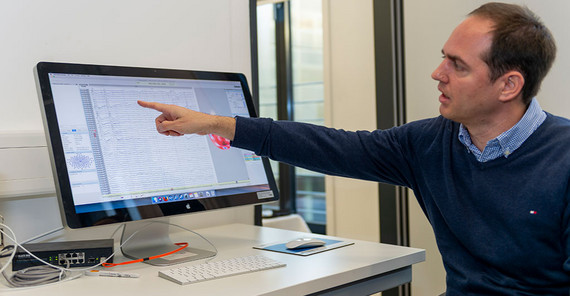 Photo : Tobias Hopfgarten
Getting ready for EEG testing
Photo : Tobias Hopfgarten
Prof. Dr. Mathias Weymar explain the EEG testing
The day the Berlin Wall fell is remembered by many very vividly: Where they were when they heard about the opening of the border, what they did first, and perhaps also what the weather was like, and what they were wearing. Often, emotional moments are remembered for longer – and in great detail. Why this is so has been the research focus of biopsychologist Mathias Weymar for many years. His research field investigates how emotions are formed and experienced and how they interact with cognitive processes such as attention, learning, and memory, in particular with a view to the related biological processes.

One thing is certain: The processes taking place in our bodies in response to emotional events are triggered by hormones, namely adrenaline and cortisol, the stress hormones that are released in emotionally arousing situations. They act on two important brain regions: the amygdala which is important for the detection of relevant events and in case of stress directly influences memory processes, via the hippocampus. “This classical memory structure is important for the consolidation of memories. The hippocampus makes them retrievable in the long term,” Weymar explains. According to the neuromodulation hypothesis, the release of stress hormones makes information available for longer. What has been researched mainly in animals, Weymar and his team are now testing in humans, using electroencephalography (EEG). “We focus on neuroscientific methods. An EEG, for instance, has a high temporal resolution and shows exactly how fast and ‘deep’ emotions are processed and retrieved.”

Emotional stimuli processed under stress are remembered for longer

For his PhD thesis submitted to the University of Greifswald in 2010, Weymar began to research the memory retrieval of emotional events. Since then, he has been using not only materials such as faces and words, but also a standardized set of pictures triggering a range of emotions – pleasant and unpleasant ones – from the International Affective Picture System database. They include photos of dental treatments and people in mourning, as well as erotic pictures and baby photos. The way people react to them is not only indicated by their dilated pupils or increased sweat production, but also by stronger brain wave activity in the EEG and amygdala activation in functional brain imaging. “The reactions to the images seen can be captured in two dimensions,” Weymar explains. “By valence, that is whether pleasant or unpleasant emotions are triggered, and by arousal, that is how strong the triggered emotional states are.” In an earlier study, Weymar gave the test persons beta blockers through which cellular receptors are blocked and the release of adrenaline is reduced. He was able to demonstrate for this setting a lower memory retrieval of emotional events.

Another test went one step further and “stressed” the participants: They were asked to put their hand in ice-cold water while looking at pictures they were later asked about in a memory test. Moreover, they had to deal with a very unfriendly investigator. The test persons’ blood pressure was high, their pulse increased – they were under stress. But even days later, they remembered the pictures. “Emotional stimuli processed in the context of stress stay in the memory for longer,” Weymar concludes. To verify the result, Weymar and his team repeated the study with a friendly investigator and warm water. Indeed, the relaxed subjects remembered the pictures not nearly as well as the stressed test persons. Actually, the long-term memory sets in the day shortly after an emotional event. “As a rule, it takes one night’s sleep to better consolidate memories, i.e. transfer them from the short-term to the long-term memory.”

Even though Weymar is doing basic research, he is also interested in links to clinical and educational issues. After all, there are many colleagues at the Faculty of Human Sciences who are researching learning motivation, knowledge acquisition, or anxiety disorders.

For the most part, mild stress has a positive effect on learning

“Among other things, our study results are applicable in clinical research. For instance, we found that those with a fear of spiders are also better at detecting them.” So the attention is higher because of the fear. “Phobic stimuli are processed better.” Often, this also triggers a defensive motivation, or flight behavior: The body is in a state of alertness, probably backing off, the heart starts racing, breathing gets shallow. Furthermore, spiders are better remembered which might be the reason why the anxiety symptoms persist in the long term.

Weymar concludes from his studies that, overall, activation has a positive impact: Interestingly, meaningful content helps promote learning. Hence a stimulating environment is something quite positive: “For the most part, mild stress has a beneficial effect on learning.” Having said this, too much stress has negative effects, such as blockades and blackouts.

For the treatment of traumatized patients, Weymar’s research is of significance, too. According to the arousal-biased competition theory, the brain prioritizes information that is relevant and linked to stronger arousal in the central nervous system. Besides, context stimuli encoded with an emotional event are particularly well remembered. A person experiencing a fall from a bike, for instance, may remember details of the situation like a street lamp, a shop, or music heard during the fall for a long time. Here, the link to clinical research is very interesting. For instance, posttraumatic stress disorder can affect a person to such an extent that function and volume of the hippocampus are affected. For instance, this area of the brain shrinks. But how can context stimuli associated with a trauma be reinterpreted, so to speak, so that the patient does not retrieve the terrible event again and again? “Whenever a content is retrieved it becomes instable – and can be modified,” Weymar explains. “Creating a safe, non-aroused state while a traumatic event is remembered might provide an opportunity to relearn a memory trace.”

Threatening memories may be selectively modifiable in the future

Not least of all, the psychologist and his team are interested in improving the memory of healthy people, too. To this end, the vagus nerve – a cranial nerve that controls several organs including the heart and the lung – is stimulated. Currently, this method is used in the treatment of patients with epilepsy or depression, usually with an electrode being implanted below the collar bone. By contrast, the team of the Department of Biological Psychology and Affective Science places a special earplug electrode to the outer ear. By this non-invasive method, electrical impulses are given to the auricular branch of this nerve. After all, the vagus nerve is also well connected with other brain centers such as the hippocampus or the amygdala. The stimulation activates these brain regions, and the memory of specific information is selectively promoted.
“In the future it might be possible to enhance cognitive processes such as learning and memory through these types of simple, easily applicable and painless methods, including the relearning of originally threatening memories,” Weymar says. Currently, his team is engaged in a cooperation project with clinical psychologists funded by the German Research Foundation: The aim of the research is to find out in how far simple biofeedback via breathing modifies the activity of the vagus nerve and can thus be used to optimize learning in both healthy persons and patients.