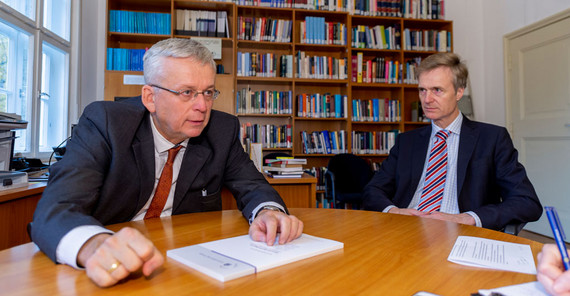 Photo : Tobias Hopfgarten
Prof. Dr. Andreas Zimmermann (left) and adjunct Prof. Dr. Norman Weiß
Many countries around the world have taken drastic measures in an effort to stop or at least slow down the spread of coronavirus: schools, universities and cultural facilities are closed, certain public places may not be entered and people may only leave their homes in urgent cases. This means that some of the measures even restrict fundamental human rights. Matthias Zimmermann talked about human rights in a state of emergency with Prof. Dr. Andreas Zimmermann, the Director of the Potsdam Human Rights Center (MenschenRechtsZentrum MRZ), and Prof. Dr. Norman Weiß, who has been working at the MRZ for many years.

The whole world is in an exceptional situation at the moment. Hardly anything is still as it was three months ago. Is that also true for human rights?

Andreas Zimmermann: Human rights, as guaranteed by the German Basic Law, but also by international treaties such as the European Convention on Human Rights (ECHR), do not apply without limitations; they end where the freedom of another person begins. Furthermore, as a rule and except for certain core guarantees such as the prohibition of torture, they can be limited if this is necessary for more important common good interests. All of this is already part of the “normal” legal situation. In fact, international human rights treaties also provide for the possibility of declaring a state of emergency, for example when war is being waged or “the life of the nation is threatened”. In these cases, certain – but not all – human rights can be restricted beyond what is already possible under “normal” circumstances.

Amnesty International cautions against the “corona crisis posing a threat to human rights”. Is that a concern?

Norman Weiß: The risk is that governments may be tempted to take advantage of the pandemic to impose restrictions on fundamental and human rights for which there would otherwise be no political majorities. There is also a risk that governments, including some in Europe, will let their parliaments give them the power to act by means of governmental decree, thus restricting or completely removing parliamentary control over the government.

Currently, several rights are being restricted in order to protect another – the right to health. Is that permissible?

Andreas Zimmermann: At present, the answer to this question with regard to the measures in Germany is “yes”. The restrictions are imposed on a legal basis, the Infection Protection Act, and serve to protect the health and lives of others, i.e. they pursue a recognized goal for the common good. They are also proportionate, as the restrictions allow for exceptions and are of limited duration.

How do you solve the dilemma of being able to protect some rights only by curtailing others?

Andreas Zimmermann: In this respect, it is important to create a balance that establishes the greatest possible equilibrium between the individual rights – a task that is not always easy in all cases.

The WHO already declared a state of emergency in January – in the meantime more and more countries are following suit and taking the same step. What are the consequences of this on human rights?

Norman Weiß: Like I said, the state of emergency regarding human rights allows for further restrictions of rights. However, only a few member states in the Council of Europe that are bound by the European Convention on Human Rights (ECHR), such as Norway recently, have made declarations in that respect. France, Italy, the United Kingdom and the Federal Republic of Germany are not among them so far. In our opinion, all the restrictions in place there are still within what is considered the “normal situation” for human rights. A so-called derogation notification would only be necessary when and if more extensive restrictions were to become necessary.

To what extent can governments intervene in human rights matters in a state of emergency? Is it permissible, for example, to conscript people to support medical services or work as harvest hands – as discussed in Brandenburg for the asparagus harvest or vegetable growing?

Andreas Zimmermann: The ECHR as well as the International Covenant on Civil and Political Rights (ICCPR) preclude forced or mandatory labor in general. This does not include military service or alternative civilian service and also, and that is what is of particular interest at the moment, “any service exacted in cases of emergency or calamity threatening the life or well-being of the community” (Article 8 subsection 3 letter c in part III of the ICCPR, Article 4 subsection 3 letter c of the ECHR). This means that compulsory labor could be enforced for medical personnel, for instance, for those who have retired.

What do you think could be in store for us if the current exceptional situation persists for a longer period of time?

Norman Weiß: As we mentioned, there is already a lot that is possible without having to declare a state of emergency. If the situation were to get worse, which is not really to be expected, one could imagine that privacy might be restricted, possibly after declaring a state of emergency pursuant to Article 15 ECHR, in order to determine the location of people via their mobile phones, or other further restrictions. It is also possible, in principle, to restrict the freedom of infected individuals, which is already permissible according to Article 5 ECHR under “normal” circumstances, i.e. without declaring a state of emergency.

Measures are always described as being temporary while some say that the government will not relinquish these special powers acquired in an emergency situation. Do you think there is a danger that – regarding human rights – things will not return to what they were before?

Andreas Zimmermann: If we look at Germany, the restrictions were imposed based on existing legal regulations, the Infection Protection Act; so the government did not give itself any new powers. The measures that have been taken would of course be disproportionate and would need to be stopped immediately if there was no pandemic of the current scale. From a legal standpoint, there is no danger in this regard.
It could be more problematic for fundamental rights, on the other hand, that citizens perceive extensive restrictions on fundamental rights as an appropriate means of solving political problems. This could turn into a political risk, especially when there are changed political constellations of power. At this point in time, however, we do not consider this a risk, at least not for Germany. It might be different in other countries, which might unfortunately even be in Europe, where such tendencies have already been observed before the corona crisis.

Sports during the Corona Crisis – Training scientist Urs Granacher on the right way to exercise for everybody, even without competitions, gyms or physical education classes “I am enthusiastic about the open-mindedness with which digital media are being explored” – Computer scientist Ulrike Lucke on the possibilities offered by e-learning during the corona crisis