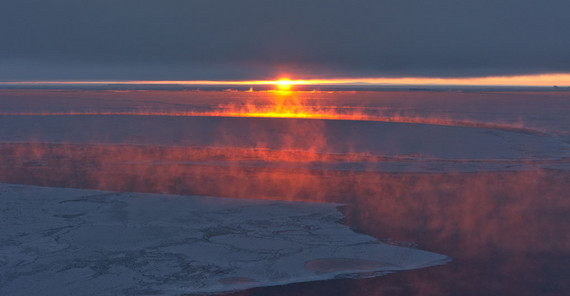 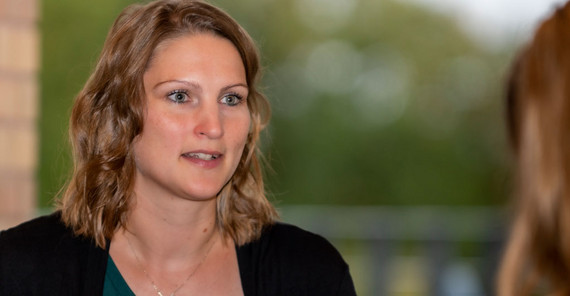 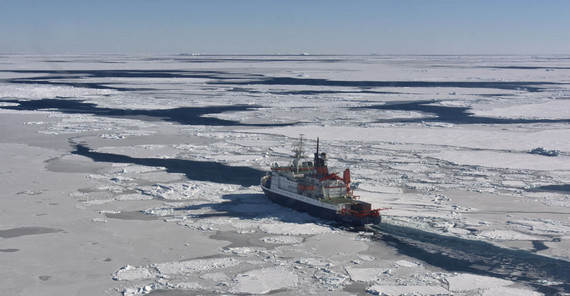 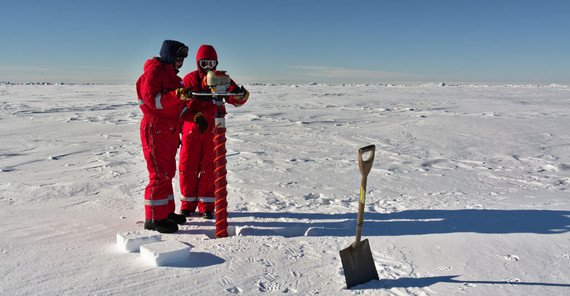 Photo : Winkelmann/Reese
Sea smoke in Antarctica is illuminated by the setting sun.
Photo : Tobias Hopfgarten
Prof. Dr. Ricarda Winkelmann.
Photo : Winkelmann/Reese
The research icebreaker "Polarstern" in the Weddell Sea
Photo : Winkelmann/Reese
Working with the ice core drill
Very few people have been here at all, to one of the world’s most inhospitable regions, where the temperature is below the freezing point even in midsummer, which shines in white and blue all year round and, apart from some researchers, is only inhabited by penguins, whales, seals, birds, and microorganisms: the Antarctic. Climate researcher Ricarda Winkelmann knows this region well, both from her modeling work at the Potsdam Institute for Climate Impact Research (PIK) and from two expeditions. In 2010, Winkelmann, 25 years old at the time, was in Antarctica for the first time, and spent 68 days at sea. In 2018, she set off to Antarctica again on the research icebreaker “Polarstern” for several weeks to observe the ice and thereby learn more about climate change.

Ricarda Winkelmann studied mathematics and physics in Göttingen and California, earned her PhD in physics at the PIK and is now leading several large research projects on climate dynamics, including Antarctica and the so-called tipping elements in the earth system. Since 2015, she has been junior professor for climate system analysis at the University of Potsdam. The 34-year-old researcher is particularly fascinated by one thing about the polar regions. “They are a unique climate archive. Ice cores provide us with a look back in time through hundreds of thousands of years.” The young researcher conveys this fascination and her extensive knowledge of the polar region in descriptive images and comparisons. Ice samples can be used like tree rings to count age segments. At the same time, the air entrapped in the ice hides a precious treasure: millennia-old air that reveals something about previous climatic conditions and allows conclusions about current changes. “The polar regions are therefore also a kind of early warning system for climate change.”

Both Greenland and Antarctica are covered by a kilometer-thick layer of ice - making them the world’s largest areas permanently covered by ice. Both regions are currently losing mass and thereby contributing to globally rising sea levels. The processes responsible for this change are very different, though, Winkelmann explains. “In Greenland, the ice is melting on the surface due to the comparatively warmer temperatures. In Antarctica, on the other hand, interactions between ice and ocean lead to the loss of mass.” The Antarctic is surrounded by floating ice shelves, some of them larger than Germany. The shelf ice has a kind of buffer effect because it slows down the ice flow from the inland into the sea. If the shelves increasingly melt due to advancing climate change, this buffer will become weaker - more ice flows into the sea and the sea level rises. Winkelmann examines these processes with the Parallel Ice Sheet Model (PISM), which her group at PIK is developing together with the University of Alaska, Fairbanks (UAF).

But could warmer air, which can retain more moisture, not also lead to more snowfall and thus strengthen the ice layer? Winkelmann investigated this question in her dissertation at the PIK. “For a long time, it was assumed that more precipitation due to warming in the Antarctic could, paradoxically, counteract rising sea levels. Our study, however, has shown that this effect is largely compensated by an acceleration of the ice masses.” Because additional snow raises the ice on the ground more than the floating ice shelves on the edge of the continent, it flows faster towards the coast, thereby contributing to rising sea levels.

Domino effects in the earth system

If the Antarctic ice were to disappear completely, this would raise sea levels worldwide by 58 meters. If Greenland’s ice sheet melted completely, this would mean another seven meters of sea level rise. This would have fatal consequences worldwide and in the long term it would also affect the coastal regions of Germany. In the future, storm surges could also occur more often and cause a salinization of the groundwater. An increasing melting of Greenland would also have consequences for the global ocean. The Gulf Stream system, for example, which brings warm air to Europe, is driven by density differences between the polar regions and the equator. Additional fresh water from the melting ice sheet can slow this flow down – and, as a result, it could become colder on the European continent.

Winkelmann is especially interested in so-called domino effects in the earth system. For three years, the junior professor has been leading the project of the same name jointly carried out by the PIK and the Leibniz Institute for the Social Sciences GESIS. “There are some interacting tipping elements in the earth system. They are comparable to a kayak: If you tip over in the water, it takes a lot of force to turn the boat around again.” Because once you exceed a tipping point, a momentum develops that progresses without additional external influences - in other words, even if it was possible to stop emitting greenhouse gases overnight. Antarctica and Greenland are among these tipping elements researchers are focusing on, but also the Amazon rainforest, global ocean currents, and coral reefs. Their tipping would have far-reaching environmental impacts on the livelihoods of millions of people. Winkelmann examines the global context of such tipping elements at the PIK FutureLab “Earth Resilience in the Anthropocene” whose co-director she has been since 2019.

During her expeditions to the Antarctic on the German research icebreaker “Polarstern”, operated by the Alfred Wegener Institute for Polar and Marine Research (AWI), the researcher was traveling in partly unknown territory. “About 100 years ago, researchers set out to this region for the first time - to the eternal ice, as they say in German. Although this nice expression is actually not correct, as we unfortunately have to conclude from current observations.” The work on board often started at four in the morning with checking the ice. “From the icebreaker, we recorded the snow cover, the thickness of the ice, and its concentration. This data is only a small part of the very extensive data sets that have been compiled over the past decades.” This locally recorded information can be used, among other things, to better calibrate satellite images.

Together with her colleagues, Winkelmann investigated other properties of sea ice using so-called salt and light harps, which were developed at the Max Planck Institute for Meteorology in Hamburg. The harps, which have pairs of wire instead of strings, measure salinity, temperature, and light incidence across the entire depth of the floe. “This enables us to record the growth and melting of a floe throughout the year. The harps are inserted into the ice, frozen, and then they regularly send new measurement data via satellite.” The aim is to find out how the sea ice in the Antarctic is changing. “For me as a mathematician, who otherwise works with the computer or paper and pencil, it is an incredible experience to examine the ice directly on an expedition,” sometimes at temperatures of under 55 degrees below zero. “At such temperatures, you have to think about every little movement, especially because you always wear thick gloves. So even tightening a screw can be difficult. ”

In addition to her research, Winkelmann has been a member of Junge Akademie at the Berlin-Brandenburg Academy of Sciences and Humanities and the German National Academy of Sciences Leopoldina for four years, and has recently become a member of its executive board. “We are celebrating the 20th anniversary of Junge Akademie in 2020. To reach as large an audience as possible, we are launching, in addition to events such as our public climate lectures, an online competition on the topic of sustainability and also a series of events on scientific topics in cinemas, museums, and pubs.” For the junior professor, teaching is just as important as research and its communication. “In my seminars and lectures at the University of Potsdam, I find it especially important to integrate current research topics.” She also develops new teaching formats with her students, such as a wiki on climate physics or SmartMovies on tipping elements.

The researcher has ambitious plans for the next few years, also as a member of the newly founded Earth Commission, an association of leading earth system researchers, which is headed by PIK director Professor Johan Rockström. The aim is to develop the scientific basis for sustainability goals that go beyond the Paris climate agreement, for example for the protection of the Amazon rainforest, the conservation of biodiversity, and environmentally compatible land use. “The work starts now and will keep me busy for the next three years. I am looking forward to it.”

Even if she constantly points out global dangers with her research, Winkelmann is a tenacious optimist, as she says. “Alexander von Humboldt once said that good ideas are only useful if they are brought to life in many people’s heads. At the moment I have the impression that climate change has reached the awareness of people at an international level.” And it has to. “If we want to meet the Paris UN climate target of limiting the rise of global temperatures to well below two degrees Celsius, we must make the turnaround now.”