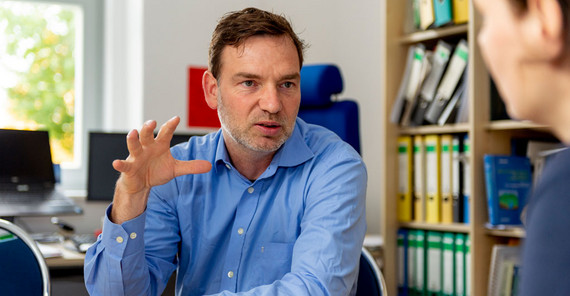 Photo : Tobias Hopfgarten
Prof. Dr. Sascha Oswald
They are super-fast, rich in energy and are created when particles from space hit the Earth - neutrons are omnipresent and usually penetrate matter relatively easily. Only hydrogen and some other rare elements can catch them or at least slow them down. On this basis, researchers use the particles to find water in soil.

“I’m actually a physicist,” says Sascha Oswald. It is therefore not surprising that the researcher is interested in cosmic radiation, particle showers, and neutrons. But what is special is that, as a professor at the Institute for Environmental Sciences and Geography, he cleverly combines physics and environmental sciences. He, his team, and many other cooperation partners, develop and optimize a method that measures on a physical basis how much water is stored in soil.

The method starts in space: Star explosions create super-fast, high-energy particles that, at some point on their way through space, also hit the Earth, just like the solar wind. Hundreds of them hit every square meter of the Earth’s atmosphere every second where they collide with other particles trigging a particle shower of numerous, now somewhat slower particles. Many of them also reach the surface of the Earth. Oswald is interested in these particles – the neutrons – because these have interesting properties that the physicist can use for his measurements.

Soil moisture as an uncertainty factor in climate research

The DFG research unit “Cosmic Sense” deals with these investigations. The goal of the transregional research unit is to develop precise measurement methods and models to better understand the water cycle and hydrological patterns in landscapes. The path that water takes in the atmosphere, on the land surface and in the ground is an important factor of hydrometeorological models, which are currently still subject to substantial uncertainties. With the help of neutrons, the researchers hope to close a large part of the knowledge gaps.

Since 2008, research has been carried out on a new type of sensor. It is supposed to provide more precise data about the water stored in the soil. Experts speak of soil moisture. The amount depends on numerous factors: How much did it rain? Do forests or grass cover the surface that absorb and evaporate the water? Is the soil sandy, stony, or loamy? Soil moisture, which is an important basis of plant and soil organism life as well as of agriculture, also varies due to climate change and the form of land use.

“Soil moisture varies a lot across large areas. Traditionally, this value is determined selectively with a soil probe. But a meter away, the value can be very different,” explains Oswald. That makes it so difficult to get an accurate picture of it. Creating a meaningful model of soil moisture across a larger area is very expensive and requires a lot of measurements. At least it has been like this so far.

Particles from space should now help to measure the soil moisture on Earth with less effort. “A decisive factor is that water slows down the neutrons, catches or redirects them,” Oswald explains. It is a mechanism that is also used in nuclear power plants to protect the environment from the neutrons generated in fuel rods. For their purposes, the researchers use this property of the naturally occurring particles found on land surface in small quantities.

They use a neutron detector - a box-shaped device that captures neutrons of a specific, medium energy range crossing its path. Their number indicates how much stored water is available in the soil of the surrounding area. After a few hours, each measuring device provides the researchers with a value that indicates the average soil moisture of about ten hectares of land. If you combine this information proficiently with meteorological data, remote sensing data, and other measurements, you get precise reference values of the soil moisture and how it changes over the course of days, weeks and months.

In 2019, the researchers examined the potential of this method in a first field campaign. At the research site of the Karlsruhe Institute of Technology (KIT) in the foothills of the Alps, they set up a dense network of 20 detectors in the catchment area of a small stream. For two months - from mid-May to mid-July - they collected a lot of data here in order to use these measurements to create a map of the soil moisture in the about one square kilometer large area. The research partners supplemented the measurements with vegetation mapping and aerial drone recordings.

Snow and cows - a source of error

“When we started, it poured for days,” Oswald recalls. The weather became drier in the course of our campaign. “That was good for us because we wanted to see the differences.” With the measurement campaign, the researchers received for the first time a temporally and spatially highly differentiated model of soil moisture. The sensors provided the required data every few hours - for eight weeks. “Such a comprehensive set of data has not been available before,” emphasizes Oswald. In addition, the researchers were able to compare the values of the 20 different devices they had used and thus to calibrate the measurements even more precisely.

Now they must analyze the data. The main goal of the research group is to expand the possible applications of the detectors. In addition, some teething troubles have to be eliminated and the sensor sensitivity has to be improved. To obtain meaningful values, the devices capture the neutrons darting around for hours. Since their number is very small, natural fluctuations cause large measurement errors. In addition, water that is bound in plants as well as snow also affects the measured values. Even cows that are curious about the installed sensors can be a source of error. “They also consist of 70 percent water. If such a herd of cows stands around the sensor, you will see that in the measurements,” says Oswald with a laugh.

To get more reliable results, all these disruptive influences have to be eliminated. The researchers have plenty of ideas how to do this. They also test the integration of sensors in moving measuring stations to receive data for larger areas in less time.

If the environmental scientists around Oswald succeed in implementing their goals, it could also take climate research a big step forward. The water exchange between soil and atmosphere is highly complex. The results of “Cosmic Sense” can be used to calibrate, validate, and improve large-scale hydrological models. Research partners at the Helmholtz Center for Environmental Research in Leipzig (UFZ) are currently working on this, feeding the data on soil moisture into their hydrological models and making predictions about hydrological changes in the next 100 years. “What will happen in Europe and especially in Southern Europe is dramatic,” Oswald emphasizes. “The last two summers, which we experienced as exceptionally dry and very hot, will be normal in a few decades.”

Prof. Sascha Oswald studied physics at the universities of Freiburg and Heidelberg. At the Institute of Environmental Science and Geography of the University of Potsdam, he is head of the working group for water and matter transport in landscapes.
Mail: sascha.oswalduuni-potsdampde

“Cosmic Sense” is a research unit funded by the German Research (DFG) that researches the hydrological variables at the land surface. Its goal is to better understand the complex water cycle between soil and atmosphere and provide findings for remote sensing and climate research.