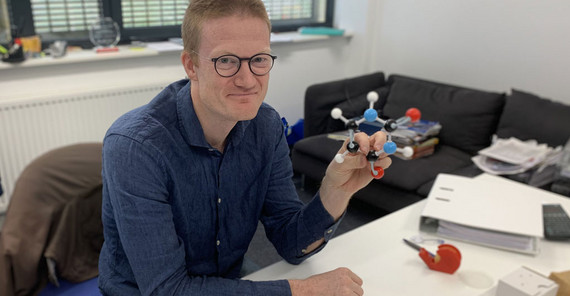 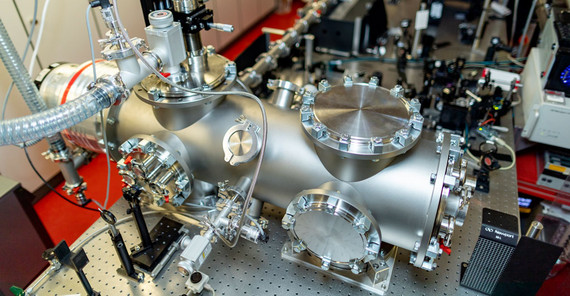 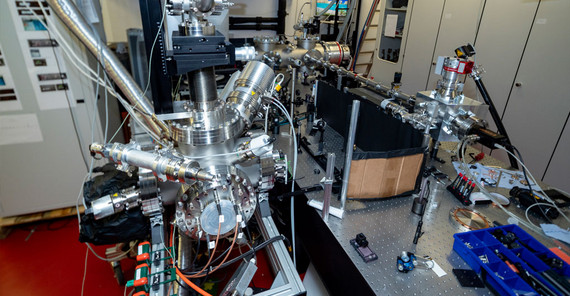 Anyone entering his laboratory at the Golm Institute of Physics must wear safety glasses - with light protection because here they use flash. Gühr examines how molecules change under the influence of light and in doing so converts energy. A process that often takes place in nature, for example during photosynthesis or when the sun warms our skin. The fact that the intense ultraviolet radiation does not damage our DNA is due to the special properties of the four nucleic bases of the double helix. They seem to have a protective mechanism that enables them to convert dangerous UV light into harmless heat. But how does it happen? And how can you observe such an energy conversion in real time? When photoexcited electrons interact with the core structure of molecules, it takes only femtoseconds, each one a mere   millionth of a billionth of a second. Hardly much of a time window. And yet Gühr manages to get an insight into these extremely fast processes.

The experimental set-up in his laboratory in Golm does not initially reveal much:  vacuum equipment, optical devices, and computers, all connected by a labyrinth of cables with building blocks and tools in between. There is, however, method to the madness. Here, Gühr’s research group conducts experiments with ultrafast lasers that generate pulses within femtoseconds. The Potsdam quantum physicists are considered to be pioneers in using extreme ultraviolet light pulses which they flash at the molecules in a vacuum to literally shed light on their behavior.

A movie about molecular processes

They also use ultrafast X-ray pulses in their research. Soft X-rays have a specific effect on the electrons of certain elements and are therefore particularly suited to tracking the movement of electrons in molecules. Such experiments, however, are not yet possible in Potsdam but only with the free electron laser at DESY, the German Electron Synchrotron in Hamburg. The aptly named facility “FLASH” generates extremely intense X-ray laser flashes within the femtosecond range, which can “take a photo” of these processes in molecules happening at the same high speed. In order to observe individual steps in a chemical reaction, for example, the researchers take countless snapshots that, when strung together, produce a “movie” that reveals the molecular process.

Scientists are extremely keen to experiment at FLASH. “The beamtimes are limited. You only have a few days for the campaign,” Gühr says, who last had the opportunity to use the facility in spring 2019. At that time, he took a 700 kg apparatus with him that he and his Potsdam group had developed for the international research community at FLASH. For safety reasons, he drove the device, which was built by a specialized company, to Hamburg himself. “If you only have limited time, nothing must go wrong. It is not easy to repeat the measurement. Everything has to work,” says Gühr and describes the exciting moment when the equipment was assembled and installed on-site. It worked. And so he and his team were able to record terabytes of data, which they are analyzing step by step.

Prof. Gühr is considered an expert when it comes to making nature’s fastest and smallest phenomena visible in real time. Before coming to the University of Potsdam as a professor, he worked for many years at the SLAC National Accelerator Laboratory at Stanford University. Already during his time as a postdoc, he was able to gain experimental experience by using the LCLS free-electron laser. He belonged to the research team that developed a new instrument for ultrafast electron diffraction. With this high-resolution “electron camera”, the researchers succeeded in taking the world’s fastest images of atomic motions in gases. An unprecedented combination of detail and speed that makes it possible to film vibrating molecules and observe the breaking and reforming of bonds during chemical reactions.

As the winner of the $ 2.5 million Early Career Award of the United States Department of Energy, Gühr took charge of a research group at SLAC that built on this invention. This new technology has the potential to lead to groundbreaking innovations in energy generation, chemistry and medicine, materials science, and many other areas of application.

Nevertheless, Gühr returned to Europe in 2016. The Volkswagen Foundation awarded him a Lichtenberg Professorship at the University of Potsdam and granted him 1.3 million euros to “research energy conversion in photoexcited states with extreme ultraviolet laser pulses”. This gave the University of Potsdam the opportunity to establish a new interdisciplinary research field.

The word ‘difficulty’ should be considered non-existent

After the strictly programmatic work at the National Laboratory in the USA, Gühr perceives the freedom of research offered at a German university to be enriching. “Talking to colleagues who are doing something completely different constantly broadens one’s own horizon,” says Gühr, who has since established interesting links to physical chemistry and biology. When the Potsdam Leibniz Lectures turned their attention to the ultra-fast quantum world in 2016, the potential for collaboration soon became clear. While physicist Matthias Bargheer focused his presentation on the X-ray of solids, chemist Peter Saalfrank reported on how ultra-short laser pulses can be used to observe the extremely rapid processes in molecules. Markus Gühr appreciates “having such outstanding research groups nearby”. In this enormously dynamic scientific landscape, it should soon be possible to apply for a Research Training Group or a Collaborative Research Center. This is reaffirmed by the extremely interested young researchers and the large number of doctoral students who are keen on experimenting. “Teaching and working together with the students is an exciting experience for me,” says Gühr. “I greatly benefit from it for my own research,” says the professor, whose lectures often flow smoothly into scientific experiments. “There is no big threshold.”

Gühr considers the concept of research-based study to be the right way to encourage talented students. This is also why he took part in the discussion on the guiding principles of teaching, with which the University of Potsdam intends to set new standards in university didactics. Thinking critically, dealing with open processes, and solving complicated problems are intellectual skills that are indispensable for both science and society. Failure is part of it as well. “If you test something and it doesn’t work, there is still something left that actually creates something new.” Or as the physicist Georg Christoph Lichtenberg, namesake of the successful funding program for outstanding researchers launched by the Volkswagen Foundation, put it “A man of spirit must not think of the word difficulty as so much as existing. Away with it!”

Prof. Markus Gühr studied and earned his doctorate in physics at the Freie Universität Berlin. He was a researcher at SLAC National Accelerator Laboratory in Stanford before he came to the University of Potsdam as a Lichtenberg Professor.
Mail: mguehruuni-potsdampde