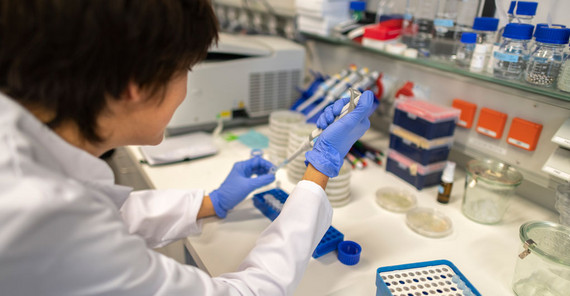 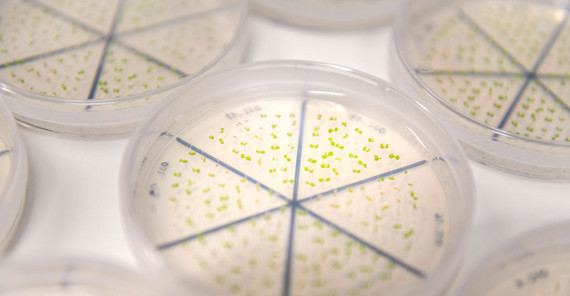 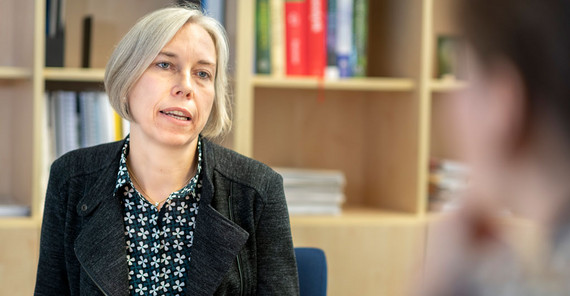 The seedlings are only two weeks old. Evenly spread, they grow on the substrate in the round Petri dish. With their two seed leaves, they all look the same, but this impression is misleading: Even though the baby plants are all of one kind – thale cress, or Arabidopsis thaliana – PhD student Vicky Oberkofler has carefully placed plants with different genetic makeups due to mutations in the six sectors marked on the bottom of the dishes. Now she is going to experiment with the seedlings to find out how the plants react to heat stress.

When the sun beats down and temperatures are rising, plants cannot simply step into the shade. Yet plants are not entirely defenseless in hot conditions. Some protect themselves through leaf hairs or a thick wax layer, others by rolling in their leaves. But first and foremost, abnormally high temperatures trigger the production of certain proteins. Heat shock proteins are something like an emergency medication for heat-stressed plants. In the cells, they repair damaged proteins and protect intact ones from being damaged. “We are interested in the regulation of those genes that control the heat shock proteins,” Bäurle explains. Other structures at the molecular level are also interesting to the researcher. She assumes that complexes of DNA and the proteins surrounding it – the chromatin – also determine how well plants can cope with heat.

Today a professor of plant epigenetics, Bäurle has been researching the genetic and molecular-biological mechanisms that make plants resistant to heat stress for a long time. In the future, her research findings will give fresh impetus to the breeding of crops. “Apart from drought, heat is one of the major factors leading to substantial crop losses even in our latitudes,” Bäurle underlines. And with climate change, summer heat waves will become more frequent and more intense. So it is important to understand the molecular mechanisms that make crops more tolerant. More robust varieties will enable farmers to prepare better for the challenges of the future and produce stable yields. A crucial point in this regard is the heat stress memory Bäurle and her team are researching.

Plants with a memory

First of all, the seedlings of the thale cress need to be primed: To get used to higher temperatures, they are exposed to water with a temperature of 37 degrees for an hour. A few days later, the procedure is repeated, but this time at 44 degrees. Seedlings that did not undergo the priming are unable to survive this type of stress. Not so the experimental plants: They have developed a heat stress memory which allows them to react quickly to great heat – without suffering major damage.

Nevertheless, some of the plants will die in the experiment, despite the priming, whereas others will hardly be affected. The causes of this can be traced back to certain genes, some of which the researchers have already identified. Where these genes are active, the structure of the chromatin changes. Bäurle and her team assume that this is a precondition for plants developing a heat stress memory. With their experiment, the biologists want to find out what happens in the plants when these genes are deactivated and do not work properly due to mutations. For each mutation, they will then study which genes are active or inactive, what the chromatin state is, what proteins are produced, and how the heat stress was tolerated.

As these are complex mechanisms, the researchers move step by step. “Often, the answer to one question leads to three new questions,” Bäurle says. “What we know already is that certain genes are switched on and off in hot conditions,” she explains. Following a stress event, these genes remain active for some days. The plant stays in alert mode, so to speak, and can react quickly to hot weather spells with protective molecules if needed. Also, there are some genes that are switched off shortly after a heat event, but can be reactivated faster during a new stress period. Bäurle calls this the “molecular heat stress memory”.

To find out whether individual genes are active or inactive, Bäurle and her team also use a substance best known from fireflies: In contact with an enzyme known as luciferase, the biomolecule luciferin begins to glow. In the lab, the molecular biologists engineered a luciferase producing gene into the plants. However, it is only active when certain other genes the researchers are interested in are switched on as well. So when being sprayed with luciferin, the experimental plants begin to glow where the respective genes are active. For the researchers, this is a simple method of testing genetic activity quickly and comprehensively.

In a next step, barley plants will be examined in the lab as the researchers have detected a certain gene involved in the heat reaction of the thale cress – FORGETTER 1 – in barley, too. They are planning to switch it off and monitor the reaction of the plant and the effect it has on its heat stress memory. Ultimately, the goal is to breed barley plants that are less sensitive to heat stress. The foundation for it is laid here.