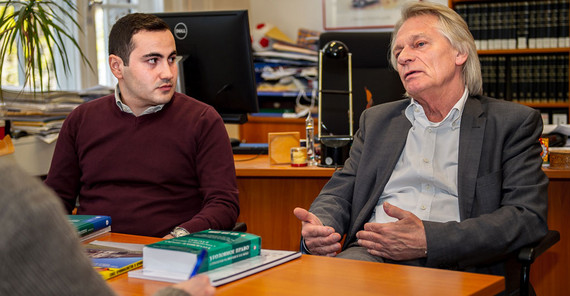 Photo : Tobias Hopfgarten
Prof. Uwe Hellmann (right) and Dr. Sargis Terzikyan
Human dignity, freedom, and property are elementary objects of legal protection. Those who violate them can expect sanctions – and these differ from country to country. Criminal law experts Prof. Dr Uwe Hellmann and Dr Sargis Terzikyan are very familiar with the rules of law, and corresponding punishments, in Germany and the former Soviet states. They work at the Research Center for Russian Law set up at the law faculty in July 2018. Dr Jana Scholz interviewed them on the importance of comparative jurisprudence for legal professionals.

Mr Hellmann, how did the idea of establishing a research center come about?

Uwe Hellmann: The idea was conceived by Professor Götz Schulze, our former dean. The purpose of the research center was to concentrate and stabilize cooperation between the law faculty and Russia as well as other post-Soviet states. Some of the relations date back as far as the GDR era, but after German reunification, too, colleagues including Professor Detlev Belling committed themselves to continuing the cooperation and building partnerships. It is his achievement that the law faculty signed a cooperation agreement with the Kutafin Moscow State Law University in 2007. Since then, the cooperation has taken on a dynamism I myself would never have thought possible. We have been organizing a number of scientific events in Potsdam, Russia, and the former Soviet states, building our own library at the Griebnitzsee campus, and facilitating mutual research stays.

Do you find differences in the theory and practice of law?

Hellmann: This is what our work is all about: Each side explains the legal situation in their country and any problems resulting from it. In dealing with a different legal system, thinking habits are challenged. Some of these habits may have been formed long ago, during your studies. Against the background of different legal systems, the German penal law does not always strike me as being entirely convincing. Comparison is always beneficial and helps to establish better standards, better legal systems. Russian colleagues are very much interested in German penal law as Germany is still one of the global leaders in the field, with a long tradition.

Why is that so? Compared to its German counterpart, the Russian legal system is comparatively young.

Hellmann: Yes and no. In fact, the Russian system developed along completely different lines. In Germany, some definitions of criminal offences go back to the Prussian Penal Code of 1851. Strictly speaking, we have a tradition of 170 years. In Russia, the situation is different. There was the tsarist penal code, followed by various Soviet penal codes from the 1920s onwards, and after 1990, a new penal code had to be developed within a short period of time. All the greater is the interest of Russian jurists in foreign criminal law.

Has some tsar or Soviet era heritage been preserved in the current penal code?

Hellmann: A completely new penal code was drafted, also with new terminology, as the economic conditions had changed radically. Certain principles, such as the very strong orientation of penalties on the inflicted damage, presumably originate from Soviet tradition. Another peculiarity is that the statutory definition of a crime includes a particular risk for society.

Sargis Terzikyan: In the late 1990s, the code was adapted to the new political and economic conditions, partly according to the Western model. And the current amendments, too, are oriented more towards foreign criminal law. The German system has become the basis for further developments. In Armenian law, for instance, danger to the public used to be a constituent fact of a crime. According to the draft of the new criminal code of the Republic of Armenia, unlawfulness and individual guilt will now be decisive. Statutory definitions of crimes of low danger to the public, such as insult and defamation, were removed from the Armenian criminal code and classified as civil law delicts. In contrast, the infliction of severe bodily pain and mental suffering will now be incorporated into the Armenian criminal code as a constituent fact, due to its high danger to the public, and will also cover domestic violence.

Is the constituent fact of danger to the public a relic of the communist era?

Are there differences in the degree of penalty between the European Union and Russia?

Hellmann: Not only in Russia, but in all post-Soviet countries, the degree of penalty is higher than in Germany. Whereas there are about 70 arrested persons for every 100,000 of the population in Germany, the same figure for Russia is 400, and for the U.S. 1,000, by the way. Vladimir Putin wants to halve the number of arrested persons in the Russian Federation, so the humanization of criminal law is a political objective. Another major difference is that punishments in Germany are either prison sentences or fines. In Russia, there are 9 or 10 types of punishment, including camp imprisonment with and without work obligation.

Hellmann: Just one example: In Russia, all constituent facts are regulated in the Russian penal code. In Germany, only some constituent facts are mentioned in the penal code, whereas many others are regulated in so-called supplementary penal provisions. The German criminal law is completely fragmented. There is no single source that could be referred to as “the” German criminal law. In my opinion, to unite all constituent facts in the penal code, as in Russia, would be the right thing to do.
Terzikyan: It would be of great advantage to the citizens, so they could find out more easily what is legal and what is not in commercial criminal law or criminal tax law, for instance. In contrast to Russia, they have to check various sources in Germany these days.

Do you have a vision of what the research center could be like in 10 years from now?

Hellmann: At any rate, we hope that there will be no change to the negative. Relations between Germany and Russia have deteriorated massively in recent years. In criminal law, there is hardly any cooperation these days. We are by far the leading institution in Germany when it comes to research on the topic.

Terzikyan: Besides, we have found new cooperation partners every year, from Armenia to Macedonia, to Azerbaijan, and Kyrgyzstan. Later this year, we will attend a conference in Uzbekistan, a country we have not yet cooperated with. It would be very good to maintain this level, and also to extend our scope beyond criminal law. We will advertise for our library which currently contains mainly books and journals on criminal law in Russian – and are planning to include publications on civil or public law as well.

What prevents your colleagues from traveling to Russia and establishing cooperation? Are particular diplomatic skills required these days?

Hellmann: If I go there to explain to the Russian colleagues how the world works, that will do nothing. This type of behavior has no beneficial result. It takes mutual trust to open up to each other and express one’s opinion. For instance, I have been recommending to colleagues for 10 years to reduce the prison population in Russia. The current rates are extremely harmful for society. The more young men, especially, have served time in prison, the more problems a society will face.

In the past, the death penalty was also an issue. It is still in the penal code, even though it has not been enforced since the early 2000s. I keep saying: Abolish the death penalty! It only adds to the general level of punishment. In my opinion, the state has to protect the lives of its citizens. Also with regard to homosexuality, the basic attitude is often different. So I say: I don’t care about the sexual orientation of other people. Actually, this often falls on sympathetic ears. But in our scientific theses, politics do not play a role.
Terzikyan: Maybe this is because our cooperation has been going on for such a long time. When we meet, we focus on the legal issues.

Is there anything in German law that Russian law experts take offence at?

Hellmann: Yes, indeed – preventive detention. In two of its judgments, the European Court of Human Rights rendered preventive detention in Germany as a violation of the European Convention on Human Rights. These judgements were quite popular in Russia. In the past, the execution of preventive detention practically did not differ from the execution of penal sentences. So it stood to reason that, strictly speaking, someone was punished twice for the same offence. In the meantime, however, new regulations have been adopted as we saw during a visit with Russian colleagues to the Brandenburg correctional facility. By the way, excursions are a firm part of the activities of the research center. We also take Russian students to the Federal Council, the Federal Parliament, the Brandenburg state parliament, or the Federal Chancellery. I once visited the Kremlin myself with a Russian delegation, which was quite exciting.

Mr Terzikyan, what is the most exciting part of your work?

Terzikyan: I am interested in contacts with partner universities, even when these are organizational tasks. From a research perspective, the legal comparison with Russia, but also with former Soviet states such as Armenia, Uzbekistan, Belarus, Kyrgyzstan, or Azerbaijan is very exciting. You meet fascinating people, and the exchange adds a great deal of value to your current research project – and future career.

Long-standing cooperation partners of the Research Center for Russian Law include the Moscow State Law University O.E. Kutafin, the Belarus State University, the Moscow State University M.V. Lomonosov, the National Research University Higher School of Economics Moscow, and the Eurasian Academy of Law D.A. Kunaev in Almaty. Regular events include an international scientific and practice-oriented conference on criminal law in Moscow, a week of German and Russian law, and a German-Russian seminar – both held on a rotating basis in Potsdam or Russia – a Russian-German round table at Kutafin University in Moscow on current issues of commercial criminal law, as well as an international comparative law conference in Potsdam.

Sargis Terzikyan completed an LL.M. program at the University of Potsdam and obtained his Ph.D. in law at the Russian-Armenian University in Yerevan. He has been working at the Research Center for Russian Law since July 2018.
Mail: sargis.terzikyanuuni-potsdampde