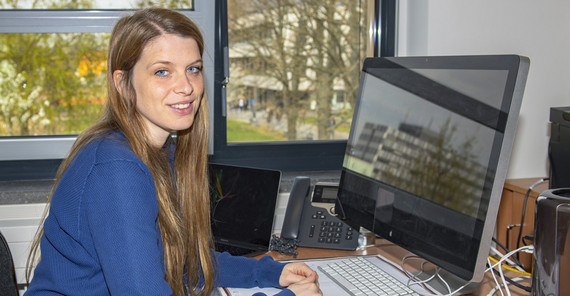 Photo : Ernst Kaczynski
Dr. Jana de Wiljes
Small variations can have big effects. This insight is part of Dr. Jana de Wiljes’ everyday work life. The researcher works with mathematical models that allow predictions about the weather, earthquakes, and robot movements. The problem, however, is that even small deviations in the initial conditions that are fed into the models result in a large variability of the simulation results. In the Collaborative Research Center Data Assimilation, it is de Wiljes’ task to mitigate these uncertainties.

The lines on the monitor of mathematician Jana de Wiljes form two interconnected ovals. The image is reminiscent of delicate butterfly wings but is actually the visualization of a mathematical model. It is the so-called “Lorenz Attractor”, named after the meteorologist Edward N. Lorenz, who developed the model in 1963. Broadly speaking, it describes how liquids and air masses flow. This is important, for example for weather forecasts.

What may look playful actually represents the dilemma of the researchers working with these and similar models: the Lorenz attractor depicts a system with chaotic behavior. It shows that long-term weather forecasts are nearly impossible because even very small changes lead to large deviations. Lorenz created the image of the butterfly effect in the context of chaos theory. This indicates, symbolically, that the flapping of a butterfly’s wings can affect the weather in a far-away part of the world.

Jana de Wiljes uses the Lorenz attractor as a so-called toy model. “It’s low-dimensional yet causes enough trouble,” she explains. “It is not comparable to the big numerical weather models.” The toy model, however, is well-suited to testing how best to combine models and data best to make the most accurate predictions possible.

“That’s not easy,” says the 33-year-old researcher. To bring together data and models, she has to develop new methods but also better understand existing ones. She scrutinizes and analyzes the mathematical assumptions behind the models and examines why certain methods are more successful than others. “Take, for example, a robot that is programmed to move in a certain direction in a room,” de Wiljes says. “Due to small bumps on the ground, the robot moves completely differently than intended. These mistakes have to be fixed by collecting additional information.” The researcher is basically looking for suitable filters to intelligently adapt models and data to each other.

Sometimes, a sheet of paper and a pencil are enough for that. She then juggles numbers, formulas, model parameters, and mathematically explores why one method works better than the other, simplifies equations and puts them into filters, analyzes assumptions, data, and results.

On other days, the mathematician uses a computer, writes codes for new filters, and initially tests them with simple simulations that gradually become more complex. “Many methods only work well when you run many simulations,” she explains. This, however, is difficult with these complex, high-dimensional models. They require so much computing power that it would be too expensive to do hundreds of simulations. Fortunately, there are the mathematicians' toy models, which, although highly simplified, are still able to map the basic functions very clearly. Testing these models eventually leads the researchers to new findings. In the long run, the progress made can be applied to the larger models.

The Collaborative Research Center is not about weather forecasts, de Wiljes emphasizes, although the mathematics behind it are similar. Many researchers across different fields of expertise will ultimately benefit from the foundations that the mathematician is developing. “We collaborate closely with the application-oriented projects,” she emphasizes. These investigate, for example, the space weather, earthquakes, and the effect of medication in patients. It is always about predictions - how intensely the next solar storm will affect the earth’s magnetic field, how strong the next earthquake will be, or how individual people with clearly defined properties will react to certain active substances.

Of course, mathematics is primarily thinking. But for her research, Jana de Wiljes seldom sits alone behind closed doors brooding over problems. “Mathematics is a team sport,” she says, something she learned as a child since both her parents were mathematicians. She discusses new ideas with colleagues, tests suggestions, or discusses possible solutions. Within the Collaborative Research Center, contact with scientists of other departments is also important. After all, the mathematician must understand what is behind the individual projects and which mathematical solutions could help.

In this way, mathematicians often venture into new territory with their instruments. While it is commonplace in meteorology or robotics to work with data and models, these methods are less common in biology and medicine. But for de Wiljes, this is an incentive rather than a deterrent. “New applications create new challenges, new methods, and new algorithms,” she says.

Dr. Jana de Wiljes studied mathematics at Freie Universität Berlin. Since 2014, she has been researching at the University of Potsdam.