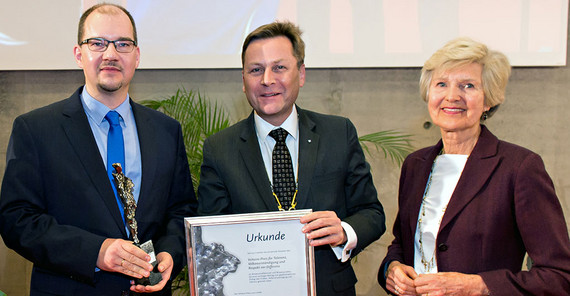 Photo : Karla Fritze
Friede Springer, publisher and founder of the the “Voltaire Prize for Tolerance, International Understanding and Respect for Differences” at the University of Potsdam with the University’s President Prof. Oliver Günther, Ph.D., and the Voltaire laureate for 2020, Dr. Gábor Polyák.

In 2010, publisher and entrepreneur Friede Springer founded the “Friede Springer Foundation”. With an endowment capital of 150 million euros, it is the largest charitable foundation established by one individual. Its main focus is the funding of scientific, artistic and cultural projects. It currently funds seven endowed professorships, which are to be perpetuated by the respective universities after a five-year term, and supports young talents with scholarships. Since 2017, the “Friede Springer Foundation” has been funding the “Voltaire Prize for Tolerance, International Understanding and Respect for Differences” at the University of Potsdam. Every year, the university awards this prize to a scholar who has exhibited commitment to the freedom in research and teaching as well as to the right of free expression. In 2020, the “Friede Springer Foundation” has won the prize for the “Scientific Foundation of the Year” awarded by the German University Foundation DUS. Friede Springer will accept the award at the twelfth “Gala for Science in Germany” set to take place on April 6, 2020, in Berlin. Matthias Zimmerman talked to her about the background and goals of her work.

What is particularly important to you?
To contribute to the advancement of science and research.

Since 2017, the “Friede Springer Foundation” has been funding the “Voltaire Prize for Tolerance, International Understanding and Respect for Differences” at the University of Potsdam. How did this cooperation come about?
It’s simple: The President of the University, Professor Oliver Günther, asked me.

What were your reasons for supporting this prize in particular?
Tolerance and international understanding are the most important issues of our time.

What are your plans for the future of the foundation?
We want to keep growing and focus on big issues, because we wish and hope to be able to set an example through our work.