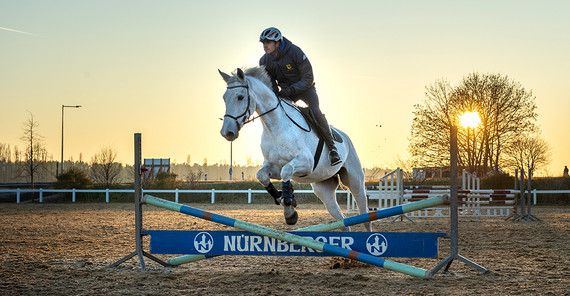 Photo : Kevin Ryl
As a modern pentathlete he loves variety. His sport is the most important thing for Marvin Dogue – his studies and leisure time come second. Otherwise, the 24-year-old could hardly be as successful. In 2017, he won the German Championships and this year, he wants to qualify for the Olympic Games in Tokyo. He is currently the best-ranking German in the world rankings. Dogue, who studies business administration at the University of Potsdam, has taken a semester off in order to optimally prepare for the Olympic qualification. “You have to set priorities. For me, the sport comes first. I have a limitited amount of time to do the sport, I can’t keep doing it forever. That’s why I don’t mind if my studies take a bit longer,” he says.

Dogue practices the modern pentathlon – a challenging sport that combines the diciplines of fencing, swimming, riding and laser-run, which is a combination of running and shooting. He started when he was nine years old. Back then, the Bavarian Association of Modern Pentathletes was visiting schools to scout children who were good at running and swimming. Marvin’s older brother Patrick stood out and his mother decided that the sport would certainly do both energetic sons good. She was proven right, because both of her sons are still active today. Patrick Dogue already qualified for the Olympic Games and Marvin wants to follow suit. When asked whether the whole Dogue family is very athletic, Marvin shakes his head laughing: “My grandfather is a Palatine wine lover. He is not athletic at all.” Dogue’s mother had to grow into the sport as well and became her sons’ trainer for the first few years without ever having practiced modern pentathlon herself. At the same time, Dogue says she was not over-eager at all and supported him even when he thought about quitting the sport.

Marvin Dogue cannot pinpoint the moment when his childhood hobby turned into competitive sport. “It was a smooth transition. In tenth grade, I thought about quitting the sport altogether for a while. But the prospect of simply graduating high school before studying and then going to work seemed too boring to me,” the business administration student says. I get to travel and gather many new impressions thanks to the sport, which wouldn’t be possible without it. After graduating high school, I had to make a decision. I joined the German Army’s athlete program, which basically means you are a professional athlete.” For him personally, his most important success was a bronze medal at the fourth World Cup in 2019. “That’s when all my doubts disappeared. Before that, I had some international success with my relay team, but at that point, I knew that I could also make it on my own. It was a catalyst for what is happening now.”

Discovering many different cultures is among the best experiences Marvin Dogue says he was able to gain thanks to the sport. He talks enthusiastically about his rivals – Koreans, who always prepare their own food because it's healthier, and Mexicans, who walk around without a T-shirt at any temperature. That’s not the only reason he loves his sport. “At some point, a runner will reach his best time. I always have room for improvement since I am not as good as someone who practices a single discipline. This and the variety of the disciplines is what makes all the difference to me when it comes to the sport.”

Dogue came to Potsdam as an adolescent. He was not satisfied with the school in Erding, where he grew up, so he and his family decided to switch to a sports school. Munich, where he would only have been training as a swimmer, was among his choices, but in the end, he chose the sports boarding school in Potsdam, which focuses on the modern pentathlon. He also stayed after graduation and now studies business administration at the Faculty of Economics and Social Sciences. He feels comfortable at the university. His fellow students play a big role in that since they support him. “It’s different from Berlin, for example, where friends of mine hadn’t yet gotten to know anyone at the university after three semesters. I can ask my fellow students for help when I miss a lecture due to a competiton.” The choice of his field of study was a pragmatic one at first, but after some mentoring, he now has an idea of what he wants to do for a living. He is interested in Social Business, which was developed by Nobel Peace Prize laureate Muhammad Yunus. “It’s the direction I want to take for now and we’ll see what comes next,” he says.