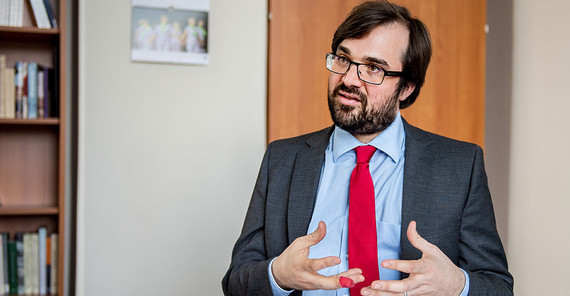 At the movies, “Wonder Woman,” the Amazon, battles war god Ares. Theme parks create ancient fantasy worlds combining Roman sculptures and Greek temples. And togas, the everyday wear in ancient Rome, enjoy great popularity as party costumes. The heroic stories and culture of the ancient Greeks and Romans are as well-known and liked today as they were in the Middle Ages, the Renaissance period, or in Goethe’s time. The ancient world has reached pop culture – without losing its fun factor. Filippo Carlà-Uhink is Professor of Ancient History at the University of Potsdam and researches why this is so.

Right into the middle of the 20th century, the ancient world was seen as the fortress of high culture. With its knowledge about the Greeks and Romans, the educated middle class wanted to set itself apart as an “elite”. “Even though this is no longer the case, the ancient world is still very present in our minds,” Carlà-Uhink says. So the great fame of Greek myths and Roman history provides the ideal basis for parodies and re-interpretations today. Especially the heroes from Greek mythology are still popular. “Everybody has heard of Achilles, Hector, and Troy. Everybody knows the story of the homecoming of Odysseus. These are exciting narratives that never get old.” And this common – although often superficial – knowledge makes the ancient world perfect for adaptations. Hollywood has drawn on these narrative worlds over and over. There is Brad Pitt as Achilles in “Troy”, Russell Crowe as a hero gladiator in the Colosseum, and most recently the submerged island of Atlantis rose again with Jason Momoa starring in “Aquaman”.

According to Carlà-Uhink, the charm of such narratives is that they make it easier to bring up difficult subjects like death, because as myths, they are not perceived as being “real events”. This is also evident in his current research project, theme parks. “Theme parks are made for families, so they generally avoid topics like death and violence, but in connection with classical mythology, it is possible to portray war, for instance.” Since 2013, Carlà-Uhink has been researching “Key Concepts in Theme Park Studies” with a focus on representations of Greek culture, now in his second DFG project on the issue. Theme parks often take on two big topics: either ancient mythology, or Greece as a holiday destination. Some also feature Hellenic history, with a strong focus on Athens. For instance, the “Terra Mítica” theme park in Spain imitates ancient Greece. There, visitors can admire Hera’s Fountain and a reconstruction of the Temple of Zeus from ancient Olympia. In contrast to this, the Europa-Park in Rust shows modern Greece, although with some ancient elements. Depending on the focus of a theme park, there can be anything from an elaborate concept to a random selection of statues and temples.

A Trojan Horse in China

As yet, Carlà-Uhink has visited seven parks specializing in Greek theme worlds, including Belantis leisure park south of Leipzig, Parc Astérix in France, Mount Olympus Park in the U.S., and two parks in Asia: Happy Valley Beijing in the People’s Republic of China, and E-DA Theme Park in Taiwan. All of them use the same repertoire of pictures and symbols: “In China as well as in Europe, there is the Trojan Horse, there are pillars with Ionic capitals, and statues immediately recognizable as from the ancient world.” While these figurative elements are always the same, they take on different meanings in different cultural contexts. “While Europe commemorates ancient Greece, in a popular way, as the cradle of our civilization and of democracy and the nucleus of Europe, the Mount Olympus Park puts the current US-Greek community at the center.” In China, Greece has two very different functions: Beijing celebrates the role of Greece in the emergence of modern sports in connection with the 2008 Summer Olympics and the forthcoming 2022 Winter Olympics. The second focus is on Greece as the origin of Western culture – parallel to ancient China, the cradle of Eastern culture. Both in China and Taiwan, however, Greece plays far less of a role as the nucleus of modern democracy than it does in the West. It is not unusual for Greek representations in theme parks to make Carlà-Uhink smile. For instance, the “Terra Mítica” park in Spain has a decoratively placed Greek inscription. The original can be seen in Athens, but in the theme park it was reproduced only in part and breaks off mid-sentence – a point missed, of course, by all those who do not read ancient Greek. But there are also funny things everyone will notice. “Funny anachronisms,” Carlà-Uhink calls them. For instance, there is Odysseus’ travel agency in Parc Astérix in France.

As the theme parks demonstrate, the depiction of the ancient world is never correct in pop culture: “This cannot be avoided, but is not a problem either,” Carlà-Uhink says, and for good reason: Many things we cannot know exactly, so history is always a reconstruction, especially when it comes to the ancient world. Each narrative is the product of an individual choice. After all, you just don’t know what happened second after second. “There is no historical truth,” Carlà-Uhink states. Popular historiography relies on many stereotypes, for instance of the Greek temple. Generally, you think of it as a white, rectangular building with six or eight columns at the front – a reflection of the Parthenon on the Athenian Acropolis. However, at least since the end of the 18th century, we have known that temples were adorned in bright colors, namely blue, red, and yellow. Moreover, they sometimes had a different number of columns or round layouts. Carlà-Uhink is convinced that such simplifying stereotypes are unavoidable. He refers to such representations as pictograms that evoke an immediate association with ancient Greece.

The ancient world lives on in pop culture

Carlà-Uhink underlines that historians have to engage with popular scientific forms and talk to those who design them: “It is important to realize what their objectives and motivations are, and, above all, establish a dialogue.” He is very realistic about the role of historical research: While a successful scientific publication may reach a circulation of 300 copies, the presentation of history in pop culture reaches millions of people. Hence, it is very clear to him that historical education, for the most part, does not take place in lecture halls.

In addition to his research on theme parks, Carlà-Uhink is involved in the “Imagines Project”, a cross-disciplinary international research network interested in modern visual representations and constructions of classical antiquity. A major aspect of “Imagines” is the cooperation with artists such as directors or comic authors who draw on ancient world themes in their work. “We want to learn from them why they have decided to take up the topic, what they read, how they informed themselves about it, and what the role of antiquity is today, in their opinion. These are the questions we discuss with them,” Carlà-Uhink says. Often, artists explain that they cover the ancient world because it has been familiar to them since their childhood. When it comes to Greek antiquity, they frequently mention well-known myths, whereas Roman history is more about the history of the Roman Empire. Also, some of the artists grew up near archeological sites and Roman buildings like the Porta Nigra Roman city gate in Trier, and were inspired by them.