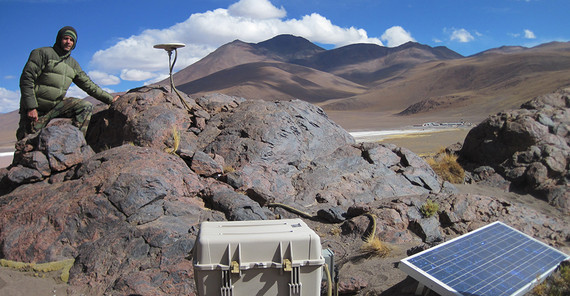 The primary interest of Jonathan Weiss has been to understand how mountains are built. While there are some well-established theories of orogenesis – the lingua franca term for mountain building - many aspects of how, when and why mountain ranges are created remain a mystery. This is especially true for the Andes; the 7,500-kilometer-long chain of mountains and volcanoes at the border of the South American continent and the Pacific Ocean. On one side, the Nazca and Pacific tectonic plates are forced to dig deep into the Earth’s mantle. On the other side, much of South America remains stable. The compressional forces associated with this convergence result in the rise of the Andes and geological hazards such as explosive volcanoes and high intensity earthquakes are common. Jonathan is particularly interested in the formation of the eastern portion of the Andes in southern Bolivia where the mountain range is youngest and seismic hazard is arguably drastically underestimated.

As part of his work, Dr. Weiss and international colleagues use a network consisting of 100’s of permanent Global Positioning System (GPS) stations installed across South America, from the Chilean coastline in the west to the rainforests of Brazil in the east, to measure horizontal and vertical ground motions as small as a few millimeters per year. The instruments are similar to but much more precise than those in your mobile phone or automobile satellite navigation system. Studying these motions can reveal detailed information about numerous processes ranging from the forces responsible for mountain building over long timescales, the short-term behavior of rocks in response to large, earthquake-induced changes in stress, and even seasonal cycles of rainfall in the Amazon basin.

Recently Jonathan and Dr. Qiang Qiu, currently at the University of Southern California, led an investigation of the characteristic surface motion that occurs in the weeks to months to years after very large earthquakes. By combining GPS measurements with a new numerical modeling method, the scientists hoped to probe the Earth’s structure beneath a portion of the southern Andes. The method is a geophysical data inversion technique that has the potential to reveal detailed information on rock mechanical properties using surface motion measurements from GPS data alone. This innovative approach contrasts the commonly used forward modeling methods that require immense computational time and resources.

Jonathan and his colleagues analyzed GPS data following the 2010 magnitude 8.8 Maule earthquake in Chile, which was the largest event to occur in that region for 50 years. The data show a complex, time-varying displacement pattern associated with fault slip near the coast and viscous relaxation in the lower crust and upper mantle in the region surrounding the earthquake and extending eastward well beyond the Andes to beneath the Argentinian lowlands.

The newly published results of their study confirm that the combination of a dense network of GPS sites with the new inversion algorithm can significantly increase our knowledge of subduction zone and deep crustal and upper mantle structure, which ultimately controls the distribution and frequency of large earthquakes and volcanic activity.  Their study provides a new piece of the puzzle that may aid scientists in determining when and where the next destructive earthquake will occur.

Jonathan Weiss is currently working as a postdoctoral researcher and lecturer at the University of Potsdam Institute for Geosciences. He is part of the research group of Professor Manfred Strecker and he continues to collaborate with international researchers including members of the German Research Center for Earth Sciences (GFZ) in Potsdam. His research has recently been funded by the NSF, NERC, the German Science Foundation DFG and the State of Brandenburg, Germany.