From Football to Experiments – How Children Learn to Think Scientifically 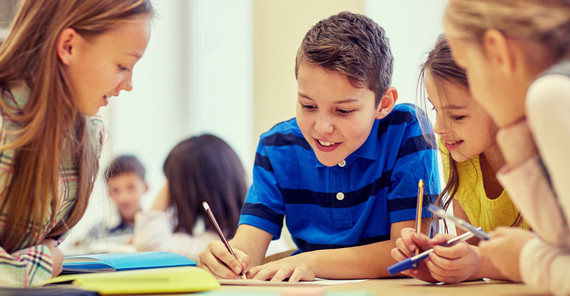 Photo : AdobeStock/Syda Productions
Experiment in school.
As every pedagogue knows, people learn better when they are interested. But why is that so? And can this insight be utilized to guide children on their way (of thinking) through uncharted territory? Junior Professor of Empirical Elementary School Pedagogy and Didactics Sebastian Kempert researches how existing interests and new learning contents can be linked in a meaningful way.

Paul loves football. He knows all the tricks, how to best save a penalty shot, and score the winning goal as a forward. He spends every available minute on the sports ground kicking with friends and has joined a football club.

Just like Paul, most children can develop a very strong interest in a certain subject, whether it be music or fantasy stories. This is a valuable asset for acquiring new knowledge, or, as Kempert puts it: “We can use extracurricular interests to put explanations in class in a context that speaks to their experiences and motivates them.”

Sebastian Kempert wants to gain a better understanding of the processes underlying interest-led learning in order to develop concrete suggestions for teaching and design new didactic materials. In a project funded by the German Research Foundation (DFG), he is investigating the connection between interest and learning in elementary school children with the example of a topic dealt with in early science classes: In years three and four, pupils are introduced to the basic principles of experimentation. They will learn to recognize – and carry out – controlled experiments. This is not an easy thing to do. Will they learn faster and more easily when their own interests are taken into account? Will Paul understand the characteristics of a scientific experiment better when it is about football? Sebastian Kempert and PhD student Ann-Kathrin Laufs have put this to the test and asked student teachers to find out how pupils react when their individual interests are brought up in class.

Is the demand on working memory reduced?

But first of all they had to find out what third and fourth graders are actually interested in. The results of the pilot survey were not very surprising: Sports and football in particular were at the top of the list, followed by pets, exciting stories, and mobile phones and tablets, of course. Based on these findings, Kempert and Laufs began their investigations at elementary schools in Berlin and Brandenburg. Some 250 girls and boys participated. First, the researchers determined what the pupils already knew about experimenting strategies, and what their understanding of them was, to facilitate a before-and-after comparison. Besides, they used playful computer tests to collect data on pupils’ linguistic skills, working memory resources, and general cognitive abilities. Kempert and Laufs assume that working memory demand is reduced when children can build on familiarity with something that interests them while they are learning something new. The free capacities could then be used for deductive reasoning, problem solving, and elaborating further, which could explain why they learn faster and better.

Another research question targets the compensation of linguistic and cognitive deficiencies through individualized teaching. “If we want to respond to the various interests of pupils and pay attention to their individual learning needs, we have to differentiate more,” Kempert emphasizes with a view to inclusion pedagogy which is unthinkable without individualized support.

In the course of their study, Kempert and Laufs identified the personal interests of every pupil. Small groups of children with similar interests were formed to allow for more targeted teaching. At this point, the teacher students came in: In two science classes, they tried to take up the pupils’ previous knowledge to arouse their interest in the subject of scientific experimentation. So the football fans were given a task in which two fictional friends, Elisa and Ben, speak about what matters most if you want to balance a ball on your foot for as long as possible. They come up with three ideas: it could be the size of the ball, the hardness of the ball, or its material – plastic or leather. Ben suspects that a hard ball can be balanced longer than a soft one. Now the pupils have to decide what Ben should do to find out whether hardness matters. Again, three options are up for discussion: Ben could compare several balls and see which one he can balance the longest. Or he could test just two balls that differ in material, size, and hardness. The third option is to test a hard and a soft ball of the same size and material.

In class, the teachers saw how pupils reacted to the question, and whether their football enthusiasm could be tapped for solving the task. “Have they learnt to formulate a hypothesis and arrive at a conclusion through observation and trial? How do they evaluate the result, and how do they explain possible deviations from the hypothesis? Are they able to transfer this way of thinking to other contexts?” This is how Kempert assesses the learning outcome which he in the end measured in another survey on the understanding of experimentation strategies.

“Results indicate that the children achieved a high learning progress regarding the experimentation strategy introduced to them, and that the interest-based way of teaching increased their motivation to learn,” Kempert says. Whether the learning progress can be attributed to the assumed lower demand on the working memory, and whether there are differences between control and experimental groups will be studied in further analyses.

Currently, the researchers are working full-steam to evaluate the data, and, again, teacher students are involved. “It is a good example of research-based studying,” Kempert says in reference to two master and three bachelor theses based on the project. In a year from now, when the evaluation will be completed, Laufs will submit her PhD thesis. The schools will get some feedback and didactical material, and the parents of the test subjects will get a response, too.

The children who learned about the principles of a scientific experiment through the example of a football, a superhero story, or a mobile phone have definitely benefited from the test already – and will perhaps remember these examples forever.

Scientific reasoning in elementary-school age: The role of interest as a moderator for the relationship between working memory and learning outcome
Funding: German Research Foundation (DFG)

Prof. Dr Sebastian Kempert studied psychology in Berlin and did his doctorate in educational psychology in Frankfurt on the Main. He has been Junior Professor of Empirical Elementary School Pedagogy and Didactics at the University of Potsdam since 2017.
Mail: kempertuuni-potsdampde

Ann-Kathrin Laufs studied educational science in Frankfurt on the Main and intercultural communication and education in Cologne. She has been a research assistant in empirical elementary school pedagogy and didactics at the University of Potsdam since 2017.
Mail: laufsuuni-potsdampde