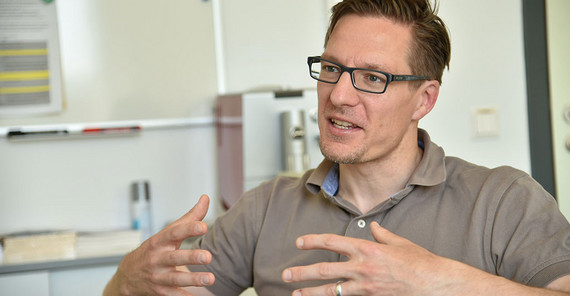 Children have a natural desire to move. They run, jump, and skip whenever they have the opportunity. But what if they prefer watching others doing sports rather than being active themselves? For quite some time, researchers have been observing an increase in motor deficits in school-aged children. To counteract this trend, the federal state of Brandenburg has launched various programs based on studies developed at the University of Potsdam. One of them is the SMaRTER study in which a team of researchers around Urs Granacher, Professor of Training and Movement Science, explores the influence of remedial PE classes on several parameters of young school children with motor deficits. Their research is part of the project “Henrietta’s school in motion,” initiated by the Brandenburg Ministry of Education, Youths, and Sports in 2017, together with the AOK Nordost, a public health insurance company, and the state sports association of Brandenburg, LSB.

“Imagine you are on a journey. Try to stand still on one leg for 60 seconds, or for as long as you can, with your eyes closed. You may move your upper body to keep balance, but keep your hands on your hips, and don’t hop or change the position of your legs.” This is one of many physical fitness tests in the SMaRTER study. Eight- and nine-year-olds from a total of 12 schools in Brandenburg completed this and other tests as part of their entrance test in February, and once again in June this year. In addition to testing their fitness and capturing their level of physical activity, the test battery also included methods to test body composition, cognitive function, and psychosocial well-being.

Earlier studies have conclusively demonstrated a correlation between physical fitness, especially endurance, and cognition. It is assumed that there is also a link between coordinative performance and cognition. For this reason, Granacher’s team also tests children’s postural control. All children participate in the project voluntarily. Most of them were recruited through the so-called EMOTIKON study – a mandatory fitness test for third graders in Brandenburg. Those displaying deficits in physical fitness were invited to participate in the SMaRTER study.

First, the researchers compare the effects of remedial PE on children in the intervention group with that of the waiting group attending regular PE lessons. After a certain time period the groups switch, so that in the end all children have received remedial PE. Following the one-year intervention phase, the researchers trace the children’s motor-cognitive development until they leave elementary school to find out whether the intervention has had a lasting effect. By now, all teachers involved in the project have been provided with teaching concepts for the intervention that takes place twice a week. The program comprises playful elements for increased strength, endurance, and coordination. Ball and relay games are included, as well as dance exercises, running, throwing, and jumping activities.

The entrance test has already shown that the children selected with the help of EMOTIKON indeed display motor deficits – and thus clearly represent the target group of the SMaRTER study. “They are the appropriate group with special educational needs,” Granacher confirms. “In February we also saw that our tests work, and that they are valid and fun.” For instance, the cognitive tests, for which team member Fabian Arntz developed an app, were very well received. “To take the test, each child was given a tablet PC,” Granacher explains. “The tasks were mainly attention exercises to be completed under time pressure.” He hopes that the new concept of remedial PE will not only have a positive effect on the physical activity and fitness level of the participating elementary school children, but on their cognitive function as well. “This would be a great outcome,” he says. “We are eagerly awaiting the post-tests that will enable us to precisely measure the effect of the intervention versus the control schools. This will certainly be the most interesting part of our study.”

By contrast, some results of the EMOTIKON study worry him: For some time, the researchers have noticed a drop in endurance performance among third-graders in Brandenburg. Achievements in the six-minute run test have declined over the past years, particularly in the lowest performance group. “Perhaps this finding is an early warning sign of things moving in the wrong direction.” Granacher can only speculate about the reasons. “We are living in an environment that doesn’t promote physical activity. Often, children are driven to school by car or bus, rather than walking or biking. Increased media use may also play a role.”

Before the SMaRTER study could launch, a lot of persuading had to be done. Granacher and Arntz had to bring on board schools, parents, and, above all, teachers – with the support of local politicians and the state sports association of Brandenburg. “We offer advanced training programs for remedial PE teachers,” explains Eckhard Drewicke of the Ministry of Education, Youths, and Sports. As an advisor for PE at school, he has accompanied both the EMOTIKON and the SMaRTER studies from the very beginning. “This research is important for us as it provides information on what practical action needs to be taken to successfully reach children with physical fitness deficits.” The idea is to include the experiences of teachers in the current remedial PE program into general recommendations, as plans are under way for a more extensive roll-out of the program in Brandenburg.

Now that the full-day program for elementary schools has been relaunched, the ministry places greater emphasis on relations between schools and sports clubs and sports associations. Here, it cooperates closely with the state sports association of Brandenburg which has just started to train 40 fitness instructors to work with children with physical fitness deficits, and to develop 40 respective offers. “We are discussing what these could be.”

The studies performed by training and movement science researchers at the University of Potsdam go far beyond scientific measurements, comparisons, and conclusions: They are of social, and thus educational and political, relevance. And not only for Brandenburg – as deficits in physical fitness among children and youths are a common phenomenon in many modern industrialized countries.

“Henrietta’s school in motion” is a program for the promotion of exercise initiated by the Ministry of Education, Youths, and Sports of the state of Brandenburg together with the AOK Nordost, a public health insurance company, and the state sports association of Brandenburg, LSB, in 2018. It is meant to engage and inspire children and teenagers for whom sports is not very much fun yet. The first set of instructors have already completed their training provided by the LSB. The SMaRTER study is part of this program. For “Henrietta’s school in motion,” AOK Nordost and the staff at the division of training and movement science at the University of Potsdam have developed, among other things, 25 movement cards for teachers to use in PE classes, and for children to use at home.

The EMOTIKON study was developed at the University of Potsdam at the suggestion of the Ministry of Education, Youths, and Sports of the state of Brandenburg. The acronym stands for “Assessment of motor performance in year 3 for the continuous evaluation of PE classes and a diagnosis-based systematization of the promotion of exercise and movement”.

Studies show that the number of children and teenagers who get sufficient exercise is declining. Accordingly, the trend and longitudinal study on the health of children and youths in Germany (KiGGS) initiated in 2003 has found that the WHO’s recommendations for physical activity – 60 minutes of moderate-to-vigorous physical activity per day – are adhered to insufficiently. In 2017, only 22 percent of girls aged 3 to 17 and 29 percent of boys in the same age group met these recommendations, with teenagers displaying a lower compliance rate than children. Besides, the compliance rate of the recommended daily minimum dose of physical activity for 7- to 10-year-olds fell from 31 percent in 2009–2012 to 26 percent in 2014–2017.