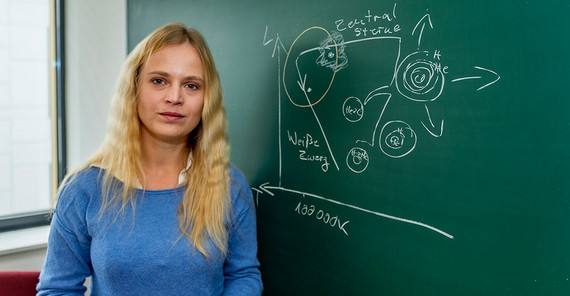 Photo : Tobias Hopfgarten
The Astrophysicist Nicole Reindl
The University of Potsdam has offered 16 positions as part of its new postdoc program – with a free choice of topic. For three years, the junior researchers can now dedicate their time to their very own research projects. Dr. Nicole Reindl is one of these new postdoctoral researchers. The astrophysicist has been doing research at the Institute of Physics and Astronomy since April 2019. Her subject: white dwarfs, the form that suns take at the end of their lives.

In the hallway in front of Reindl’s office there is a poster showing the life path of stars. There, you see that stars with a large mass can burn only a few million years before they explode in a supernova. Stars with a lower mass - just like our sun - can burn steadily for billions of years. Only when the fuel inside the sun has been used up do they inflate to up to 200 times their size and become a red giant, which eventually loses a large part of its mass by forming a planetary nebula. The remaining part of the star shrinks to a white dwarf - a small, very hot, and very dense star.

Reindl explores these white dwarfs and their immediate progenitor. Since April 2019, she has been a postdoc in Prof. Stephan Geier’s group at the Institute for Physics and Astronomy in the new Potsdam postdoc program, which aims to attract excellent junior researchers to the university. Reindl previously spent three years in Great Britain at the University of Leicester. In autumn 2018, she joined the group of Prof. Stephan Geier as a visiting researcher, with whom, as she says, she has been cooperating for years. During this time, she got the postdoc position. She will be able to continue the “very good and fruitful” collaboration in this working group in the next three years.

Reindl initially studied physics in Siegen and then moved to the University of Tübingen for a master’s degree. There she encountered astrophysics. “When writing my master’s thesis,” she says, “I noticed that I really felt at home in this subject.” In Tübingen, she also did her doctorate and received the dissertation award of the German Astronomical Society for her dissertation on the spectral analysis of white dwarfs. She then moved to the University of Leicester in Great Britain, where she obtained third-party funding from the renowned Royal Commission for the Exhibition of 1851.

Reindl specialized in the analysis of white dwarfs even during her doctorate. White dwarfs - the final stage of suns with a mass that is at most eight times that of our sun - account for about 95% of all stars. Not only this makes them interesting to research. White dwarfs with temperatures of up to 200,000 degrees can serve as a “laboratory”, Reindl explains. “Such high temperatures and densities could never be generated on Earth.” The study of white dwarfs can show which states atoms take under such conditions. At the same time, white dwarfs are very old, sometimes up to twelve billion years. This makes them interesting for a kind of “galactic archeology” examining the history of our galaxy. “And finally, it is also interesting to know what will eventually happen to our sun.”

Reindl has recently investigated what the future of the sun could look like. The evolution of suns is not always the same. About ten percent of the hottest white dwarfs show signs of almost completely ionized gaseous metals - elements in a state that only occurs at extremely high temperatures, much higher than those that are normal for white dwarfs. Reindl and her international team were able to explain how this may happen: Stars of this kind are most likely surrounded by a magnetic field that captures the gaseous material flowing off their surface. Shock waves within this so-called magnetosphere heat up the material immensely and strip off almost all electrons from the metal atoms.

The favorite star in sight

Reindl’s “favorite star” is the central star of the Stingray nebula, about 5,000 light years from Earth. She has had an eye on it since her doctoral thesis: Telescopes such as the Hubble Space Telescope or comprehensive celestial observations with earthbound telescopes of millions of stars generate large amounts of data. These are then distributed globally among researchers working on the various stars. For example, Reindl and her colleagues receive data of those spectra that refer to white dwarfs. This data shows the temperature of the stars, their gravity, and the elements that exist on them.

Her star, says Reindl, is particularly interesting. Stars usually evolve very slowly: “When you look at them 20 years later, they still look the same.” With the central star of the Stingray Nebula, it is different. “Surprisingly, you can watch how it changes.” Moreover, it is a star that has been observed for a long time - so you can make statements about its evolution.

Reindl and her colleagues were able to prove that the reason for the unusually rapid development lies in the re-ignition of the helium shell surrounding the core of the star. As a result, the star returns again to an earlier stage. Over the next three years, Reindl would like to deepen her studies on white dwarfs that show highly ionized metals, and work on improving the analysis of white dwarfs from large sky surveys.

Dr. Nicole Reindl studied physics in Siegen and Tübingen, where she also obtained her PhD in astrophysics. Since April 2019, she has been holding a postdoc position in the “Stellar Astrophysics” group of Prof. Stephan Geier at the Institute of Physics and Astronomy.
E-Mail: nicole.reindluuni-potsdampde

This text was published in the university magazine Portal Wissen - One 2020 „Energy“ (PDF).