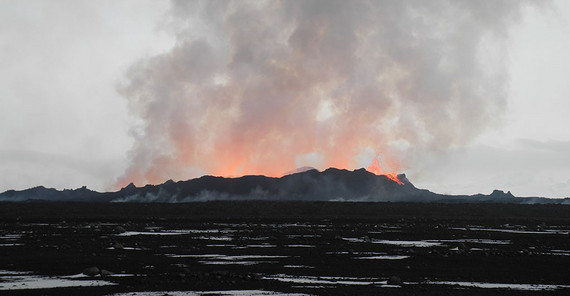 Photo : Eva Eibl
Ausbruch des Holuhraun, 2014
In August 2014, all of a sudden the earth in Iceland shook more often and more intensely than usual. The Icelandic Meteorological Office, which localizes and monitors all earthquakes and volcanic activity in real time, was immediately alarmed. Over a period of two weeks, the earthquakes moved from the glacier-covered Bárðarbunga volcano towards the Holuhraun plain. A volcanic eruption in the center of the country was imminent. On 29 August, the first lava fountains erupted from a fissure that was 2 kilometers long. The magma continued to flow for six months and formed a huge lava field spanning 85 square kilometers, an area the size of Manhattan. It was the strongest eruption in Iceland in 200 years. Throughout, the earth kept shaking. Volcanologist Eva Eibl, Assistant Professor of General Geophysics, was in the field and recorded the vibrations.

Iceland is known for its intense volcanic activity. Slowly the island is breaking apart as the Eurasian and North American Plates are drifting apart. This drift is forming a mid-ocean ridge that stretches around the globe. For the most part, it runs 2 kilometers below the surface of the sea. But due to a hotspot, Iceland juts out from the water. Consequently, the eruptions along the ridge are visible to the naked eye, and often in populated areas, too. Currently, there are 32 active volcanic systems in Iceland. Each one consists of a central volcano and a fissure system that may stretch over hundreds of kilometers northeast and southwest as the plates drift apart. Lava may erupt from both the central volcano and the fissure system. The Holuhraun plain is part of such a system with neighboring Bárðarbunga as its central volcano. “In the case of Holuhraun, the magma probably leaked out from a chamber below Bárðarbunga, and first moved laterally before reaching the surface,” Eibl explains.

The volcano below the ice

For two weeks, the earthquakes moved at a depth of 5 to 8 kilometers more than 50 kilometers north, while the ground was rising up. The vibrations were significantly more frequent than usual and reached up to a magnitude of 5. “For Iceland, these were very strong earthquakes,” Eibl says. It was evident that magma was moving and would likely surface. The situation was quite dangerous as the magma was mostly moving below a layer of ice. If it surfaced and got in contact with the ice, an eruption with an ash cloud could follow – as was the case with the Eyjafjallajökull eruption in 2010. The consequences would have been disastrous. After all, the Eyjafjallajökulls eruption lasted only a couple of weeks and produced earthquakes up to a magnitude of 2, whereas the significantly stronger Holuhraun eruption lasted for no less than 6 months. Fortunately, the magma surfaced some 10 kilometers north of the ice cover. On 29 August 2014 around midnight, lava erupted from the ground. The nocturnal spectacle continued until 4 o’clock in the morning. Some 24 hours later, the same 2 km long fissure opened up again. Within a few days, lava poured out of only 3 vents: one at the northern end, one at the southern end, and one in the middle of the fissure. The magma from the middle one, spontaneously named Baugur by Icelanders, lasted the longest und formed a huge lava field. The eruption produced eight times more lava than the eruption of Eyjafjallajökull had. Since the region is uninhabited, there were no human casualties. But toxic gases escaped and traveled as far as Sweden.

Volcano seismologist Eibl takes an interest in earthquakes occurring before and during an eruption. Her research examines where they happen and what they are caused by so as to facilitate better early warning. “When you consider how many people live near volcanoes these days, it is crucial that they can be warned as early as possible,” Eibl says. In the event of a volcanic eruption, every hour counts for a timely evacuation of the population. In her current research project, she is analyzing tremor data from the Holuhraun eruption in 2014/15. Tremors are vibrations that, in contrast to earthquakes, last for a long time. As a rule, earthquakes are quite short and display a characteristic sequence of seismic waves travelling either through the earth or along its surface. There is a precise sequence of certain types of waves which is also used to localize earthquakes. By contrast, a tremor is a continuous signal which may last for months, as happened during the Holuhraun eruption. “For a tremor, there is no precise arrival time of waves, and the start is difficult to determine, which also makes it more difficult to localize than an earthquake,” Eibl explains. While earthquakes – due to their high frequencies – can be both felt and heard, tremors go unnoticed.

The trembling of the volcano

Because tremor signals are so complex, volcanologists often disregard them and focus on earthquakes which are easier to analyze. But Eibl faces the challenge and wants to find out more about the origin of tremors. To this end, she analyzes tremors that occurred in Holuhraun at a depth of up to 2 kilometers. “The closer we get to the surface, more and smaller earthquakes occur, that we cannot tell apart. We think that the tremor consists of such earthquakes,” Eibl says. She believes that tremor occurs not only during an eruption, but also prior to it, so she hopes they could be used as early warning signals. Since February 2019, she has been exploring, together with a team of researchers from Cambridge who also performed measurements in Holuhraun, whether tremor occurred before the eruption. Some results suggest that this could be the case. While there were still earthquakes after the eruption, the tremor ended when the magma flow stopped.

Eibl analyzed data from an array of 7 seismometers installed 300 to 1 000 meters apart from each other. The array was located 15 kilometers from the volcanic vent on top of a small hill, safe from lava and water, but close enough to record effectively. The researcher herself went there to set up the array. “To appraise possible dangers you need to be in the field,” she underlines. A number of measuring devices were installed just a few meters from the fissure. “Some teams measured the escaping gases to be able to say whether or not too many toxic gases had entered the air – which would have meant evacuating the northeast of Iceland,” Eibl says. Other teams drove around the lava field using GPS to measure and calculate its size and in which direction it was expanding. The whole time, there was the danger of an eruption below the ice cover triggering a flood wave that could have run over the researchers. Such flood waves or additional eruptions below the ice would have been indicated by tremors. However, with the conventional methods at the time of the eruption, it was impossible to determine the exact location of the tremor – an important piece of information that would have been essential to predict a flood wave.

In the end, Eibl succeeded in locating the place of origin of the tremor by using a new method of interpreting her measuring results – it had originated below the ice; an important step forward for early detection of volcanic tremor. Due to the huge number of volcanic systems in Iceland, it is often not clear where and when the next tremor may occur. Therefore, Eibl is planning to test her method in a different place later this year. On the island of La Réunion, east of Madagascar, there is a volcano which erupts three or four times a year, providing ideal conditions to detect and record tremor data.

But Eibl does not want to say goodbye to Iceland yet. “Volcanoes in Iceland are still poorly understood since there are so many volcanoes and, by comparison, so few seismometers in the field,” Eibl says. For instance, it is not known yet where or at what depth the magma chambers are and what their size is. And why the interval between volcanic eruptions changes, as in the case of the Hekla volcano, is not known either. So there is ample room for Eibl to find out more about the boiling ground of Iceland and volcanoes in all parts of the world.

Prof. Dr. Eva Eibl studied geosciences and geophysics at LMU and TU Munich and earned her doctorate in volcanic seismology at the University College Dublin in Ireland. She has been Assistant Professor of General Geophysics at the University of Potsdam since September 2018.
Mail: eva.eibluuni-potsdampde