The Ups and Downs of Mountains – Peter van der Beek, guest scientists at the University of Potsdam, obtains an ERC Advanced Grant 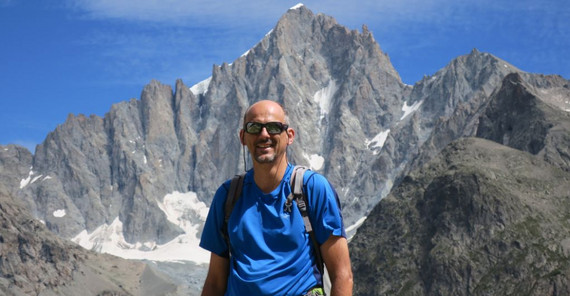 The internationally well-known geologist Prof. Peter van der Beek who is currently a guest professor and scientist at the Institute for Geosciences at the University of Potsdam, is one of the awardees of the European Research Council Advanced Grants 2018. In early 2018 he also received the Humboldt-Award for outstanding research in respect to his work on thermochronology and geomorphology and spent six months in Potsdam, amongst others developing the project that has now been funded. The Dutch scientist, who is a full professor at the Université Grenoble Alpes, will study the interactions of geo-tectonic mountain uplift and climate driven erosion in collaboration the work group of Manfred Strecker. The ERC grant will allow him to build a new laboratory to measure erosion rates at geological timescales with unprecedented resolution.

Tremendous forces are present within the Earth, forcing the movement of continental plates. During their collision, mountain belts are folded and huge geological units are uplifted. The Alps for example are a direct result of the collision of the African and the Eurasian plates; the Himalayan mountains were formed by the Indian continental plate crashing into the Eurasian plate. Both mountain ranges are examples for a process that occurs at many places in the world and that is called mountain building or orogenesis by geologists. This process is active even today, and mountains would rise to enormous heights, if other processes would not constantly wear them down: rain, frost and biological erosion – all controlled by climate factors. Peter van der Beek investigates those processes to better understand the interdependencies of uplift and erosion, to get an idea if there is some kind of equilibrium between both processes and to identify potential control mechanisms between orogenesis and erosion. His tools to do so: geomorphology and thermochronology.

By using geomorphology, he looks at the geological processes of orogenesis and erosion. Thermochronology on the other hand helps to understand the rate and speed of the processes. Thus, van der Beek can study the erosion and uplift rates back in time. His studies, that take him to the European Alps, the Pyrenees and the Himalaya, are focused on understanding the interaction between orogenenesis, erosion and climate. Thus, he builds the bridge between geosciences and climate research.

During his appointment as an Alexander von Humboldt Guest scientist, Peter van der Beek, who is a professor for geology at the Université Grenoble Alpes, will stay at the University of Potsdam’s Institute for Geosciences for the next 6 months. He will also work together with colleagues from the German Research Center for Geosciences (GFZ). By getting Peter van der Beek to come to Potsdam, the University of Potsdam continues its tradition of attracting high-ranked scientists and Humboldt-Fellows to the state of Brandenburg. Peter will be the fifth Humboldt-Fellow working at the Institute for Geosciences within the last five years.