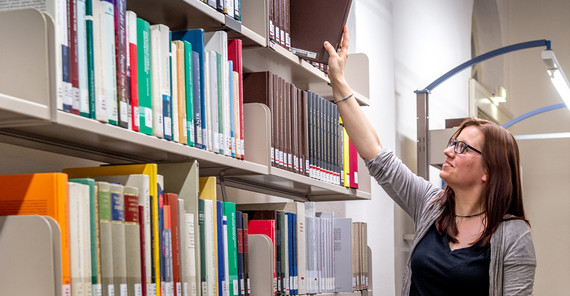 The 18th century – the heyday of letter writing – had not yet dawned. But even 100 or 200 years earlier, the elite circles of the electoral courts in the Holy Roman Empire of the German Nation exchanged letters, thus continuing an old tradition. Some of these letters are written in distinctive feminine handwriting, as it was not only the electors themselves who took up the quill gladly and frequently but also the wives ruling by their sides. Be it during the day or in the evening in the light of chamber sticks and oil lamps, they noted what was on their minds. Almost every day, short or long letters in Latin, German, French, or another language, displaying various levels of command of the written language, poured out from residencies. The electresses saw themselves not as decorative accessories of their spouses but as important mediators in court matters. For a long time, this aspect did not receive adequate attention in historiography. Now PhD student Ulrike Sträßner of the University of Potsdam is coming forward to counter the fact that women were edited out of the history of Brandenburg/Prussia, too. With her dissertation, she hopes to contribute to a change in perspective. Her research focuses on the “everyday life and concept of rulership of Brandenburg electresses in the 16th and 17th centuries as reflected in their correspondence networks”.

”Weil dan gemelter Georg Pose nochmals bey vns, vmb gnedige Vorbittschrifft an E.G. emsiges fleiße ansuchung getan, Alß bittenn E.G. wir nochmals ganz Töchterlich vnd freundtlich sie wolle vmb vnsret willen, freuntlich vnbeschweret ferner bey ihrem freuntlichen gelibten Herrn vnd Gemahll in dieser Sachse das beste vorwenden helffen vnnd vorbittenn, Domit gnentern Georg Posen solche straff gnedigst erlassenn, vnd er sich solcher vnserer Vorbitschrifft rühmen müge ...” This is an excerpt from a letter written by margravine Catherine of Brandenburg-Küstrin to Saxon electress Anna in 1580. In it, the margravine asks in very concrete terms for a pardon, which was not uncommon at the time. In addition to their many duties at court, the electresses also wrote letters to exert some influence and pursue a “foreign policy”, albeit not quite as we understand it today. In those days, politics was based on hierarchically structured family relations. This is the level at which interests were negotiated, compromises reached, and decisions on war and peace made.

A detective game in the manner of dominoes

Catherine of Brandenburg-Küstrin is one of seven electresses whose lives and correspondence Sträßner is researching. She consistently sees her as an integral part of a ruling and working couple whose share in ruling has remained largely unseen due to a one-sided research perspective. Using various sources but mostly letters, Sträßner systematically compares domains and recapitulates the everyday life of the electress. For her research, she has chosen a unique approach: Instead of presenting unidimensional, purely biographically structured narrative threads, she subsumes the women of the House of Hohenzollern as a social group. “Thus, the comparison of various domains can be used to work out ruling and acting patters characteristic of the individual, the dynasty, or the social group. On this basis, prevalent traditional narrative patters can be challenged,” she says.
She has studied some 500 letters as well as court regulations, invoices, certificates of appointment, and many other writings. “It is a huge detective game,” Sträßner says with a smile. It has a domino effect to it: Starting out from the family setting and the relations between family members and third parties, a large network of contacts unfolded before her eyes. There are many more correspondences available than she originally expected, judging from the poor state of research. For some electresses, Sträßner has identified up to 80 correspondence partners. “Not all of these correspondences lasted years,” she explains. But some of these correspondences started with a wife’s arrival at her husband’s court and ended on her last day. Sträßner discovered that letters varied in both content and function, such as short messages of greeting, standardized letters, and very personal writings. As a whole, they reveal that the writers were in a rather ambivalent situation. At their spouse’s court, they acted as delegates of their dynasty of origin while also putting themselves in the service of the family they had married into – a difficult balancing act that required great skill.

Topics range from travel plans to culture and religion

“In their letters, the electresses write about their daily routines, family affairs, the organization of life at court, travel plans, and many more topics,” Sträßner summarizes. “Just as well, they exchange views on political, dynastic, cultural, religious, and emotional affairs with their correspondence partners.” The researcher has analyzed many correspondences meticulously with the help of an established integration concept which she modified to incorporate gender-specific aspects. Then, the threads of relations were scrutinized for their content in order to interpret the domains appearing as topics in the correspondence with regard to everyday life at a court and its concept of rulership. Many of the domains are recurrent themes in correspondence, including religion, interventions in different types of affairs, relations with subjects, inner-family conflict, raising children, continuation of the dynasty by providing heirs, finances, and the management and sale of landed property.

When it comes to the concept of rulership, the correspondence of Anna of Prussia is unique. “With regard her position in the dynasty, she was an exception, because she was a daughter-heir,” Sträßner explains. But exactly this right of inheritance was questioned. She had to fight, which also is also reflected in her letters. “Anna of Prussia felt strongly related to the inheritance, because her dynastic value was derived from it and because she wanted to secure her inheritance for her descendants,” Sträßner knows. The problem, however, was that she depended on the support of her husband, who showed much less commitment in this matter and was willing to compromise with other heirs in waiting. The regional narrative tradition attributes a certain dominance to Anna and also to her mother, duchess Marie Eleonore. This trait also appears in her letters. “Anna is seen as annoying by her contemporaries,” Sträßner concludes from many of her correspondences. The princess drove people mad by being well informed, insisting on her ideas, and pushing hard to make them a reality. With her family of origin – which was related to the German emperor and the Danish royal dynasty – she could pose quite a threat potential, which she also took advantage of.

The electresses as their subjects’ national mothers

The letters of all electresses indicate that, in the context of their interests, they acted as national mothers. Subjects were able to address their concerns either to them or their spouses. “However, this cannot yet be assessed, since not everything was handed down,” Sträßner emphasizes. This is a major challenge she faced in her research. But there are many things she can prove, for instance the dominant interests in the correspondence, as was the case with Anna of Prussia. Conclusions can also be drawn about their relationship with their husbands. “In the ideal case, an electress ruled alongside her spouse and negotiated responsibilities and the allocation of tasks with him,” Sträßner explains. Since the elector usually signed contracts, issued invitations, etc., the electresses often stressed in their correspondences that the decision was ultimately their husbands’ – which makes them appear passive at first. “It is exactly these formulations and the almost symbiotic relationship between some princely couples that conceal how deeply the electresses were involved in decision-making and mediation processes.” All of them were active in each of the established domains. The extent to which they were active depended on the status of their family of origin, the relationship with their spouse, material resources, and personal preferences.

“I am fascinated by the variety of topics and the often very vivid language of the seven electresses in their correspondences,” Sträßner says with delight. “It feels great to hold all those letters in my hands and have the privilege of working with them.”

On October 30, 1594, Anna of Prussia married Margrave John Sigismund, who later became Elector of Brandenburg. The marriage was to secure Brandenburg’s claims to the duchy of Prussia. They had eight children, three of whom died at a very young age. The marriage also had some territorial political significance, since Anna was the niece of the last duke of Jülich-Cleves-Berg, John William, and the Prussian Hohenzollern considered her the heiress of the dukedoms Cleves, Jülich, and Berg, the counties Mark and Ravensberg as well as the barony of Ravenstein.

Anna set up her own diplomatic network and tried to pursue her claim to inheritance wisely. She was aware that she needed the support of male rulers to attain her goal – because of her insecure legal status as a woman – and, therefore, searched very actively for allies.

At the end of the War of the Jülich Succession, the Hohenzollern had to share Jülich-Cleves-Berg with Palatinate-Neuburg only. Following the Treaty of Xanten signed in 1614, Cleves and the counties Mark and Ravensberg fell to the Electorate of Brandenburg. Thus, for the first time, Brandenburg-Prussia took possession of territories in the Rhineland and Westphalia. A Prussian interest in connecting these territories was given as the reason for a further expansion to the West and became reality in the 19th century. After her husband converted to Calvinism, Anna became an advocate for the Lutheran people.
Source: editors/Wikipedia

Ulrike Sträßner studied history and German and completed her state examination to become a teacher at secondary school at the University of Potsdam, where she is writing her dissertation under adjunct Prof. Dr. Frank Göse of the department of regional history at the Institute of History.
ulrike.straessneruni-potsdamde