The Mystery of the Rainforest – Geoscientists show that humans were already shaping the central African landscape 2,600 years ago 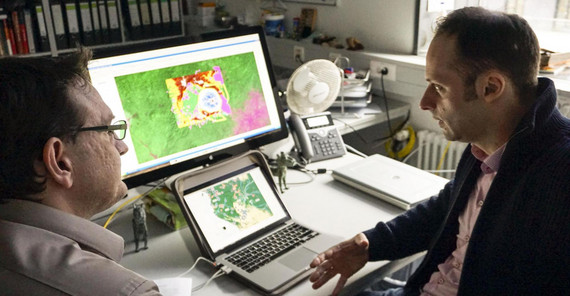 Fields, roads, and towns but also forests planted in neat rows, and dead-straight rivers: people shape nature to better suit their purposes. The fact that humans dramatically changed the ecosystems of Central Africa 2,600 years ago has now been discovered by a team led by Potsdam geophysicist Yannick Garcin. The researchers have taken a significant step towards solving the riddle of the so-called rainforest crisis. They examined lake sediments in southern Cameroon and found that it was not climatic changes such as extreme drought or large fluctuations in precipitation that were responsible for the drastic change in the local ecosystem but rather humans.

People need space – for settling, livestock, and agriculture. Population growth requires more space. Forests are cleared and crops sown in order to have more arable land. This is how humans change the ecosystems in which they live – a simple connection repeated throughout human history. A similar relationship exists between climate and ecosystems. When the climate changes, the amount and rhythm of precipitation changes as well. Less rainfall then leads to vegetation changes, i.e. changes in the variety and quantity of plants in an area. Both effects have the same result: a change in the diversity and composition of a region’s flora.

Environmental scientists are able to clearly identify and date such historical changes in regional vegetation by using various observation methods. They were able to prove that a dramatic change in the rainforest ecosystem in Central Africa must have happened 3,000 - 2,000 years ago. About 2,600 years ago, the dense rainforests were quickly replaced by a patchwork of forest and savannah followed by an equally abrupt recovery of the forest about 600 years later. But what triggered this sudden change that geologists call the rainforest crisis? The discussion has centered around these two processes, and most researchers have thought that a regional climatic change was more likely. So-called pollen analyses were considered as evidence of this thesis. Biologists and environmental scientists examined plant residues and seeds that can be found in lake sediments.

Garcin used this method as well. The geophysicist, who works at the Institute of Earth and Environmental Science at the University of Potsdam, is committed to answering how ecosystems and habitats develop. Where does his interest in landscapes that are thousands or even millions of years old come from? "For me, Africa is part of my homeland. I grew up in Cameroon and Senegal. I love its nature and people, and I see the great potential of the region. It is, therefore, almost self-evident that I’m interested in doing something for Africa as a researcher as well." He was particularly impressed by the complex rainforest ecosystem. "The processes that take place there impact many different parts of the Earth system."

Garcin and his team examined sediments from Lake Barombi in southern Cameroon, because sediments formed at the bottom of lakes, due in part to plant pollen being carried by the wind into the lake from the surrounding regions. Due to the low flow velocity of lakes, these deposits are hardly swirled and disturbed. Even seasonal changes can be detected. As a result, the age of the sediments can be very accurately determined.

Already in the 1980s, pollen analyses in sediments of Lake Barombi were showing that the ecosystem in Central Africa changed drastically about 2,600 years ago. Sediments before then had contained very little pollen from savannah plants but suddenly started becoming prevalent in sediments at this time. Since these plants can manage even with very little precipitation, the course of events in the rainforest crisis seemed to be resolved: Climatic changes must have caused the decline in rainforest. But Garcin and his colleagues were of a different opinion. They wanted to find out if the change in the ecosystem could have had other causes, so they decided to focus on analyzing plant waxes. Their studies confirmed that there must have been a sudden change in the ecosystem around Lake Barombi.

The researchers studied the bottom of Lake Barombi in Cameroon

Barombi Mbo, as it is known in Cameroon, is not a "blank spot" on the scientific map. By the end of the 19th century, German researchers had already visited the region around Lake Barombi and called it "Elephant Lake ". At that time, scientific interest focused on the flora and fauna, and geographers only measured the lake and mapped its depth. Since then, the self-image of geo-research has changed a lot. "Today, we want to analyze the entire Earth system to get a better understanding of interactions, cascading effects, geosphere-biosphere relationships, the climate, and humans," says Garcin. He and his colleagues from research institutions in Germany, France, and Cameroon therefore also contacted archaeologists and anthropologists to get closer to solving the mystery of the rainforest crisis.

And indeed, the latest data measured by the international research team showed no change in to the amount or rhythms of precipitation. Fluctuations in the intensity of rainfall in a region cause changes in the chemical composition of the rainwater. Such fluctuations are detectable in vegetable waxes and, in the long term, in the river and lake sediments. Researchers use the measurand δD to determine this. If climatic changes were the reason for the rainforest crisis, there would be also changes in δDobservations. Supported by the Institut de Recherches pour le Développement (IRD) and others, Garcin accomplished a logistical masterstroke to get more accurate data. "Tons of material, a floating platform, analysis tools, power generators, tools, and computers – we shipped almost an entire laboratory to Lake Barombi, rebuilt, and reassembled everything there," says Garcin. A task for which he saw himself well prepared given that he had studied earth and environmental sciences. "As geoscientists, we work in the most remote areas. Good logistical preparation is almost as important as the scientific work itself."

The floating platform enabled them to retrieve sediment samples from different areas of the lake. "Obtaining samples from a depth of over 100 meters requires special technology," Garcin explains. This would not have been possible without the local population consenting to having it brought to the lake, assembled, and used there. "So we spoke with the village elders and hired locals as drivers, helpers, and facilitators." Ultimately, the researchers were able to recover and analyze sediments of the highest quality. The measured δD data indeed failed to confirm the fluctuating precipitation theory. Changes in the regional climate were, therefore, not the cause of the rainforest crisis – another explanation had to be found.

Humans cleared the rainforest of Central Africa 2,600 years ago

"It is a basic principle of science: as researchers, we have to constantly review theories," emphasizes Garcin. "If a theory turns out to be unsustainable because of such tests, researchers need to develop a new one. We have now initiated this step for the rainforest crisis." For this new theory, he and his team resorted to the expertise of completely different areas of research. In collaboration with archaeologists and anthropologists, they found evidence for a new thesis in more than 460 archaeological finds from the region. Artifacts of indigenous people were rare until about 3,000 years ago. Starting around 2,600 years ago, on the other hand, many more were suddenly able to be found. This indicates an increase in human activity and the number of settlements in the area. More people, however, means more food is needed. Lake sediment contains, for example, a large amount of plant parts that originated from crops such as pearl millet and oil palm. The people with agricultural experience cleared the rainforest in order to gain acreage. Then, at the end of the rainforest crisis, the seeds and pollen of crops disappear again from the archaeological finds. The pressure exerted by human settlement had apparently subsided.

Garcin assumes, therefore, that it were not climatic changes that triggered the rainforest crisis but rather the people living in the region who needed arable land. A similar process can be observed in large parts of Africa, South America, and Asia today. The pressure of settlement, i.e. population growth, forces people to cultivate more land for agriculture. "We also see our study as a proof that nature has the ability to regenerate," says Garcin. If the pressure of settlement weakens, the original ecosystems might be able to reemerge. "This does not mean we should continue to be irresponsible with our resources and ecosystems," says Garcin. "At some point, the great regenerative power of nature will be exhausted."

Dr. Yannick Garcin studied Geology and has been a research assistant at the Institute of Earth and Environmental Science of the University of Potsdam since 2006.
garcingeo.uni-potsdamde

Dr. Simon Schneider studied Geophysics and Communication Studies. He has been working at the Institute of Earth and Environmental Science of the University of Potsdam since 2015.
simschneuni-potsdamde