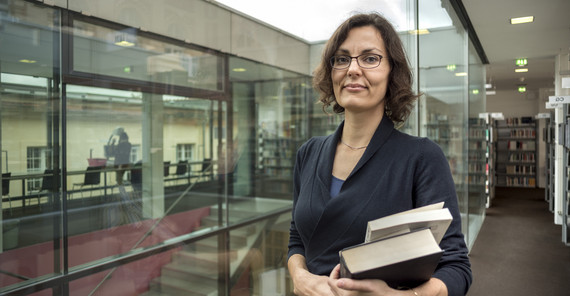 An equestrian statue divided the US in the summer of 2017. It is located in Charlottesville, Virginia, and depicts General Robert E. Lee, commander of the Confederate States Army during the American Civil War (1861 to 1865). In the conflict between the conservative South and the liberal North about the abolition of slavery, Lee won numerous battles. To many people, he remains a war hero. When the City Council of Charlottesville decided to remove the statue, several thousand right-wing extremists – among them members of the Ku Klux Klan and the Alt Right Movement – aggressively and violently protested this decision.

An expert in American studies, Dr. Hannah Spahn has examined the origins of this explosive conflict. They lead back to a centuries-old problem in American history. In Charlottesville, Thomas Jefferson, a Founding Father of the United States, helped establish the University of Virginia in 1819. Jefferson was the third president of the United States and one of the principal authors of the Declaration of Independence. In it, he posited “all men are created equal.” “Jefferson represents a key contradiction of the Enlightenment,” Spahn explains. “As a philosopher and statesman he stood between slavery and freedom.” While speaking out against slavery, Jefferson was one of the most prominent plantation owners of his home state Virginia with more than 200 enslaved people working for him simultaneously.

For her PhD thesis, Spahn studied this important yet ambivalent figure of American history. She has been fascinated by the US ever since she attended college there. “Modern democracy originated here. In many respects, American culture can be regarded as the vanguard culture of modernity – and this holds true especially for African American culture.”

The contrast to slavery, which parts of the American population upheld fiercely over a long period of time, could not be greater. In her habilitation project “Cosmopolitanism and Character in Nineteenth-Century African American Literature,” Spahn researches African American literature in the “long” nineteenth century – from the Declaration of Independence in 1776 to the US’ entry into the First World War in 1917. “Several authors experienced the contrast between slavery and freedom first hand,” the scholar explains. Among the writers whose works she is studying are personalities as diverse as Frederick Douglass, James McCune Smith, Eliza Potter, William Wells Brown, Frances Harper, Charles Chesnutt, Anna Julia Cooper, Booker T. Washington, and W. E. B. Du Bois. Many of them traveled to Europe.

In the 1830s, New Yorker James McCune Smith (1813–1865) moved to Glasgow, Scotland, to study medicine. Even though slavery had been abolished in New York in 1827, he was prevented from studying in the US. He became the first African American to graduate from the University of Glasgow, in medicine, among other subjects. McCune Smith was not only a physician and pharmacist, but also the author of a number of philosophical essays. In his writings, he drew a positive picture of Scotland. Eliza Potter (1820–1893), also of New York, traveled to France with the white family who employed her and trained as a hairdresser there. “In her autobiography, she presents herself as an independent, confident woman – and an advocate of European culture,” Spahn finds. “She adapted Parisian chic. Her customers were well-to-do members of the American upper class whose provincialism she mocks in her memoirs.”

W. E. B. Du Bois (1868–1963) was also drawn to Europe. He attended lectures at what was then Friedrich-Wilhelms-Universität in Berlin. Later, he became the first African American to receive a doctorate from Harvard University, with a thesis on the transatlantic slave trade. He, too, had a predominantly positive image of Europe. “For many African Americans, Europe was a positive foil to the US,” Spahn explains. Inspired by this “European Dream”, many authors were even enthusiastic about the English aristocracy. The United Kingdom had officially banned slavery in 1833.

Authors grappled with the heritage of the Enlightenment

In the nineteenth-century US, laws regarding African Americans differed from state to state. In the South, blacks were largely banned from attending school or college, from voting and publishing their own texts, while in the North, the situation was changing in many places. Here, an African American middle class culture developed. For instance, many refugees from slavery had settled in New York. Though quantitatively small, there was an African American middle class with its own schools, reading groups, and salons. Magazines formed in which authors such as McCune Smith published. “His review of ‘Moby Dick’ was one of the first to highlight the philosophical dimension of the novel,” Spahn emphasizes.

The life journeys of the authors Spahn studies reveal a very particular concept of the cosmopolitism characteristic of Enlightenment thought. African American intellectuals such as McCune Smith looked at the long-term effects especially of the Scottish Enlightenment and outlined a cosmopolitan triangle between America, Europe, and Africa. “Many African American authors demonstrated a particular sensitivity to the complex heritage of Enlightenment thought, which was marked by cosmopolitan ideas on the one hand and an ambivalent relationship to slavery on the other.”

This also included African American identity, or character, as it was then often called. “From the point of view of many African Americans, the term ‘character’ had emancipatory potential,” Spahn explains. “To some extent, it referred to Enlightenment positions.” By contrast, “identity” often had a negative connotation in the nineteenth century, as for formerly enslaved people, for instance, grave legal problems could result from their identity becoming known. In contrast to that, “character” could imply the development from a slave’s status as property to that of a civic subject. As in the case of Toussaint Louverture (1743–1803), who became the political “character” par excellence of African American literature in the nineteenth century: Born into slavery, he later became the leader of the Haitian revolution that led to the foundation of the first independent state in the Caribbean. These are the conceptualizations of character in politics, philosophy, and literature that Spahn examines in her work.

However, what African American literature actually is or was is debated among scholars. Is it defined by topics, genres, or the authors’ ethnicity or race? How difficult such classifications may be is suggested by an author like Charles W. Chesnutt (1858–1932). “Chesnutt looked like a ‘white’ American with a moustache,” Spahn explains. But in the turn-of-the-century US, the one-drop rule applied according to which “one drop of black blood” or one ancestor of African origin defined a person as being “black”. This construct is taken up by the genre of the passing novel, which Chesnutt perfected in works such as The House Behind the Cedars: An African American character basically passes as being “white”, thus challenging a construction of “race” which, on the other hand, is also assumed by the passing novel.

There is no consensus among scholars even with regard to the “classical” genre of African American literature of the nineteenth century, the so-called slave narrative. In 1789, Olaudah Equiano (1745–1797) composed a spectacular text of this kind called The Interesting Narrative of the Life of Olaudah Equiano, the story of his personal journey to freedom. Later, the genre was even copied by white Americans pretending to be former slaves. The interest in this type of text, which continues today, also became evident in the Oscar-winning movie version of the memoirs of Solomon Northup (1808–1863) titled Twelve Years a Slave – an autobiographical text which, however, in large part describes the opposite situation, namely the enslavement of a free African American from the North.

Spahn makes it a point to show the wide variety of forms and themes of African American literature. While some proposed the non-violent abolition of slavery, others fought for its immediate end, by force if necessary. Contemporaries discussed the question of whether slave owners should be compensated for released slaves just as heatedly. These discussions ended only in 1865 with the 13th Amendment banning slavery throughout the US.

But that was not the end of unequal treatment: Right into the 1950s, racial laws segregated the American population. And the recent conflict about the statue makes it clear that their long-term effects continue to this day.

Dr. Hannah Spahn studied American studies, history, French and German literature and received her PhD from Freie Universität Berlin. She has been working at the Department of English and American Studies at the University of Potsdam since 2013.