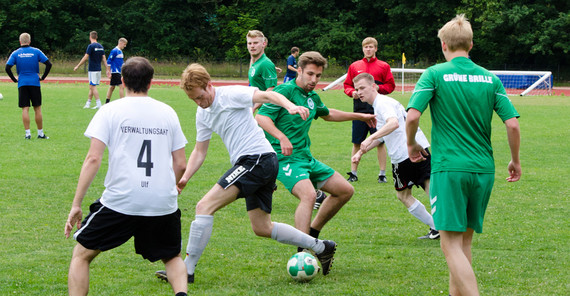 Which team will win is also a matter of probability. Photo: Thomas Roese.

For some, soccer is a bore, since not much is going on. Others follow “their” team every weekend. Ulrich Kortenkamp is a soccer fan and Professor of Didactics of Mathematics. He can prove that soccer and mathematics are a great match. Using the example of sports, he introduces teachers and students to probability calculation.

When a team like Bayern Munich seems unbeatable and dominates the German soccer league, things may get a little boring. But soccer’s popularity is also due to the unexpected things that may happen. “The exciting thing about sports is that you don’t know what will happen – as long as matches are not manipulated,” Kortenkamp says. In mathematical terms, the results of soccer matches are just random events with a certain probability of occurrence. But soccer is also an unjust sport, in that the players of teams presumed to have no chance may score goals and lead their team to victory, even if virtually no one expected them to.

However, things get interesting whenever forecasts are checked for their validity – and this is what Kortenkamp does at school. “Often, math problems are presented in a dull way.” For instance, students are asked to calculate the volume of water a tank can hold. “This is of no interest to them,” he is sure, “Why would they want to know this?” To calculate the volume of a space and thus the amount of water it can hold is not particularly difficult. Things get more exciting when students estimate the results before actually calculating them. Then, mathematics is needed to compare these estimates to reality and demonstrate who was right and wrong.

Matches are simulated millions of times

In soccer, too, the result is initially unknown. Before the match, fans discuss what the outcome could be, and speculate which team will end up at what position in the league. Kortenkamp is convinced that this example is well suited to learning mathematics. Whether a player will score a goal or not when kicking at this or that angle cannot be calculated without significant effort. But the probability of a certain outcome can be determined very well with the help of comparatively simple stochastics. “You cannot say that a probability is right or wrong, unless there are clear theoretical reasons behind it.” When casting dice with a “perfect” die, the probability of getting any number is one sixth. Without this type of theoretical consideration, you have to do a lot of practical testing. When applied to soccer this means: The probability of Dortmund winning against Bayern Munich can be determined using simulations in which the teams are hypothetically playing against each other a million times under the same conditions.

To forecast probabilities, mathematicians develop models. For instance, to establish the probability of a goal being scored in a penalty shootout, they use comparable data constantly collected in soccer, such as the number of penalty kicks in Germany, or of successful goal kicks. This provides a measure of probability. But one can also use a very practical approach. You can have students shoot penalties, count goals and misses, and then devise models accordingly. There are principally five possibilities for firing the ball at the goal: center, bottom left, top left, bottom right, and top right. Normally, the goalkeeper only has a chance of catching the ball if he decides beforehand where to jump. And the player has to decide beforehand where to kick. Assuming that each of the five possibilities is equally likely, the probability of scoring a goal is 80 per cent. “Since most penalty kicks land in the goal, this prediction is quite realistic,” says Kortenkamp. The quality of predictions rises with the quantity of information available in advance – such as if the goalkeeper knows that a player always chooses the same corner.

Everything from goal to player value is incorporated in the models

When developing a model to forecast the result of a match “we look at individual attacks and assume that every team has nine goal-scoring chances in a match,” he explains. Of course, this assumption may be far from reality. If a team wins 12:1, for example, it obviously had to attack more than nine times. On the other hand, it is certainly possible for a team not to attack at all. “However, these simple assumptions allow us to assign to each team a probability of scoring a goal in one of its attacks.”

At the end of every season of the German soccer league, there are a lot of data available that can be used mathematically. The overall number of goals scored during the season, for example, allows for the average number of goals per match to be calculated. And more parameters may be included, such as a higher weighting of the second round, as it documents the current performance level of the teams. The market value of the team, or its players, is also important. From this, a prediction may be derived on the probability of a given team to win, lose, or tie. Computer simulations make it relatively easy to carry out predictions. Kortenkamp and his colleagues know how to write such programs and use them at school as well.

“If we played the same season of the German league for a thousand years, Hoffenheim might just be the champion once,” Kortenkamp explains. “That does not mean that it cannot happen. If it happened, our prediction would not be wrong. We can only say that our model is correct.” Whether the model becomes reality, remains to be seen, of course – and that’s not the essence of probability calculation anyway. After all, everything is possible.

Are you a soccer fan?

What made you combine soccer and mathematics?

This is not particularly inventive – whenever it is about probabilities or decisions, people turn to mathematicians. Things became particularly interesting in the cup final between Bavaria and Dortmund in 2014, when the question “goal or not” was discussed. Projective geometry can answer it very vividly (it should have been “goal” which, in the end, eventually led to the introduction of goal-line technology).

Do you calculate the season of the German league continually?

Whenever the HSV is at risk of descent, my colleague Matthias Ludwig (University of Frankfurt) and I are asked about the probability of this happening – so: yes, we calculate continually. You will find the latest projections on Twitter (@ukor).

You show that soccer results are relatively predictable. Does that affect your enthusiasm for the sport?

No, because probabilities make a match interesting. Even if a team is very certain to win, let’s say 90 percent, it does not mean you already know the outcome. You are either looking forward to a good match or hoping for a little miracle. What really affects my enthusiasm is the miserably conducted instant replay!

You say soccer and mathematics can be linked up very well and used at school. In what way? Have you tried it? And what were the results?

Matthias Ludwig describes it very well in his book “Mathematik + Sport“. Also in teaching practice, we use sports-related topics - particularly in probability calculation, as it appeals to students, is relevant for life (transferred to other situations), and the teachers are enjoying it, too.

Prof. Dr. Ulrich Kortenkamp studied mathematics and computer science in Münster. Since 2014, he has been Professor of Didactics of Mathematics at the University of Potsdam.