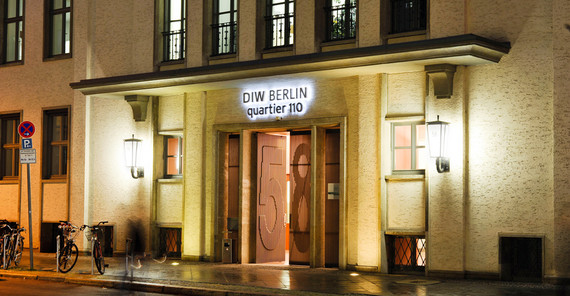 An expert on the Greek crisis, Alexander Kritikos is frequent commentator for newspapers, television, and radio. Although Kritikos was born in Munich, part of his family lives in Greece. He studied economics and political science at the LMU Munich, earned his doctoral degree at Humboldt University Berlin, and completed his Habilitation at European University Viadrina. Currently, he is Research Director for Entrepreneurship Research at the German Institute for Economic Research (DIW Berlin) and Professor of Industrial and Institutional Economics at the University of Potsdam.

In our series “Pearls of Science”, we regularly introduce researchers from institutions connected with the University of Potsdam in the “pearls – Potsdam Research Network“. In this issue: Prof. Dr. Alexander Kritikos from the man Institute for Economic Research (DIW Berlin).

Entrepreneurship – is difficult to define cleanly. It comprises not only the whole process of establishing a business, but also subsequent decision-making, leadership, negotiation, renewal, and investment. Economist Alexander Kritikos seeks to understand what characteristics founders need in order to successfully start their business and safely steer it through good times and bad times.

His own surveys and evaluations of data collected by the DIW Berlin-based Socio-Economic Panel have produced diverging results: It turns out that those personality traits that are beneficial in the early days can become a problem as firms mature. At first, one needs to be open to new experiences and willing to take risks. Later conscientiousness and low levels of agreeableness are more useful. A higher level of the willingness to take a risk, and trust in colleagues, business partners, and supporters, two characteristics that help when starting a business, should increasingly give way to a moderate level of risk tolerance and critical attention in daily operations as businesses mature.

Kritikos uses empirical methods and instruments from psychology for his investigations into which personal qualities and motives lead to success and why so many companies quickly fail. Do the motivations that were important when starting the business play a role for the eventual success or failure? Linking theoretical questions with practical applications is also important and Kritikos works to make sure that his results are applied to the real world, helping people interested in starting and running a business.

Alexander Kritikos and Marco Caliendo, also an Economist at the University of Potsdam, are researching what drives companies to continue to grow and hire new staff. How do entrepreneurs develop the indispensable ability to continually innovate, taking the less traveled road, thus giving room to new ideas? They are both interested in the personality traits of entrepreneurs and how economic outcomes are affected by these traits. These research results are the focus of lectures and seminars on entrepreneurship and innovation that Kritikos gives at the Faculty of Economics and Social Sciences.

Kritikos finds teaching rewarding: the students’ ideas and unconventional thoughts ultimately enrich his research. Through his teaching, he helps students learn how to recognize and assess causal relationships when analyzing empirical studies. This extends to encouraging students to reflect on how best to use modern methods and instruments when carrying out research projects. Whenever he spots talented young researchers, he encourages them to pursue a career in economics. So far he has supervised several Master’s theses and convinced some of his graduate students at Potsdam to pursue a PhD at the DIW Berlin Graduate Center.

Future PhD students will have an abundance of research topics to choose from at DIW Berlin. These days Kritikos launched a new project funded by the German Federal Ministry of Education and Research that will examine and compare the innovative capacity of micro and small companies in Germany and Greece. It is assumed that companies with fewer than 25 employees are less capable of innovation, Kritikos notes. He is confident that empirical analysis will show that this is not true. The project will include cooperation with IOBE, a Greek economics research institute. The partners will investigate whether and how small companies succeed in effectively and innovatively responding to the ongoing economic and financial crisis in Greece. With his cutting edge research, Kritikos will enhance his expertise on Greece and on entrepreneurship.

Prof. Alexander Kritikos has been Research Director for Entrepreneurship at the German Institute for Economic Research (DIW Berlin) since 2011. Before, he was Head of the Department “Innovation, Manufacturing, Services” since 2008 and Vice-President from 2010-2011. He is Professor for Industrial and Institutional Economics at the University of Potsdam, Research Fellow of the Institute for the Study of Labor (IZA), Bonn, and of the Institute for Employment Research (IAB), Nuremberg.

GERMAN INSTITUTE FOR ECONOMIC RESEARCH
Founded in 1925, DIW Berlin (the German Institute for Economic Research) is one of the leading economic research institutes in Germany. The Institute analyzes economic and social aspects of relevant current issues and advises political and economic stakeholders based on its research findings. As part of both the national and international scientific community, DIW Berlin provides global academic research infrastructures and promotes young academics. It is an independent and, as a member of the Leibnitz Association, primarily publicly funded institute.