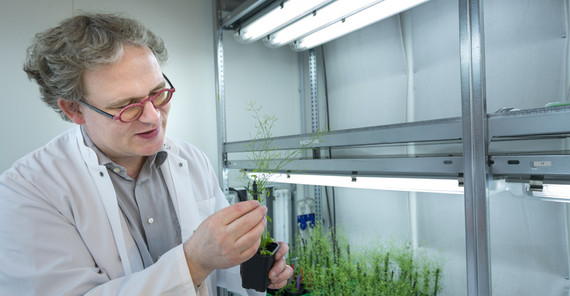 Whether in plants, animals, or human beings, cells are the buildings blocks of life. Their interiors are little organisms in themselves, consisting of membranes, cytoplasm, organelles, little protein factories and metabolic processors. To keep everything running smoothly, each compartment has its specific place. Substances are transported from one organelle to another, from one cell to the neighboring cell. It is this asymmetry, which is determined by genes and performed, maintained and controlled by innumerable molecules, that researchers describe as cell polarity. When it is disrupted, the effects are dramatic.

In most plants, the root grows downwards and the shoot upwards. There are exceptions, however, in Markus Grebe’s laboratory. The Professor of Plant Physiology takes a jar from the climate chamber with thale cress seedlings that are only a few days old. The little plants with the scientific name Arabidopsis thaliana, do not seem to know which way is up and which way down. The seedlings grow in all directions - look crooked and sick. Grebe explains why. “They are mutant plants in which a specific gene has been switched off.”

Plants can orientate their growth by gravity and thus are able to differentiate between upwards and downwards. Plant physiologists call this process gravitropism. It allows plants to anchor their roots deeply in the soil and lets the shoots and leaves grow in the opposite direction. Grebe is particularly interested in those plants in which this mechanism is disrupted - because defects were introduced into their genetic information - leading to changes in the function and the distribution of individual proteins in the plant cell.
Plant physiologists deliberately switch off specific genes in order to subsequently investigate the functions of these genes in the plant. To be able to examine such a plant, Grebe first has to grow it in the laboratory. He treats plant seeds with a chemical reagent, a so-called mutagen, which alters individual DNA building blocks. Other methods are based on ionizing radiation or on bacteria that introduce certain DNA building blocks into the plants’ genome.
The plants that develop from these seeds have mutations. After applying a chemical mutagen, a plant may have 300-400 mutations. “Many have no effect,” Grebe explains. And then the researchers have to find the needle in a haystack to identify the plant with the desired mutation - which was randomly generated.

The process is extremely time-consuming; the researchers scanned about 30,000 plantlets in the Grebe’s laboratory to find interesting mutations. “Two colleagues needed three months for it,” he says. Under the “giant magnifying glass” as Grebe affectionately calls his microscope, he is able to identify what is going on inside these mutated plants. When enlarged, each individual root cell is visible in the delicate seedling measuring only a few millimeters. While cells of healthy seedlings are evenly spaced and close together, individual cells in the diseased plants look strangely displaced and disorganized due to the maldistribution of an important protein, which regulates their growth.
The proteins and lipids Grebe is interested in are usually located on only one side of the plant cell - at the top, at the bottom, directed towards the middle of the plant or towards its outside. Researchers call this phenomenon cell polarity. Organelles, membranes, and molecules are not evenly distributed in the cell but asymmetrically and in defined places. Only there are they able to fulfill their specific function.

The researchers identify new genes and their functions

In a healthy plant the plant hormone, auxin, regulates amongst many other processes the development of lateral shoots and root hairs. To this end, it is transported in a specific direction - downwards in the stem of the shoot and in the inner root cells but upwards in the outer root cells. Therefore, one hormone transporter is always located on the side of the cell from which, for example, hormone transport out of the cell takes place.
For his investigations, Grebe marked this molecule with a fluorescent dye, which emits green light under the microscope showing the researcher its exact location in the cell, i.e. not the place where it is supposed to be in the observed mutant. Unlike in a healthy plant, the hormones in the roots of mutant Arabidopsis seedlings are wrongly distributed. This has serious effects on the entire plant. The transport of auxin and thus the growth of the plant is disturbed. The cause is a gene mutation that alters a component in the cytoskeleton. Threads of this skeleton traverse the entire cell ensuring that everything is transported to the right place. In the observed mutants, this mechanism is severely impaired. The auxin transporter does not reach the side of the cell and the hormone is no longer properly distributed in the plant.
As a consequence, shoots and roots bend without direction; the plant withers away. In nature, it would have hardly a chance to survive. “We identified genes that alter the localization of the auxin transporter,” Grebe explains, and this is precisely his research goal. He and his team are identifying more and more genes and the associated proteins responsible for cell polarity and ensuring that a plant cell is healthy, can transport nutrients, and can grow and divide - in a nutshell that it performs all the important functions.

Like the auxin transporter, a variety of different molecules is produced in the cell and transported to their specific destination, for example proteins that protect plants against pathogenic fungi. They are located on the outer membrane of plant cells. Mutants with such a protein inside but no longer on the outside of the cell are more susceptible to disease. Grebe and his team identified a previously unknown protein that ensures the transport of this protective molecule.
“Cell polarity is extremely important for all living beings,” Grebe emphasizes. Human and animal spermatozoa and fertilized egg cells (zygotes) are already polarized, similar to plant pollen and zygotes. A plant cell divides, stretches, and differentiates itself - “with many polarization processes taking place at the same time,” says Grebe, who has been fascinated by the underlying mechanisms of this phenomenon for more than 20 years.
In practice, the new findings of plant research will be used in areas that might seem unusual. “We have already identified several new genes, also some that exist in humans,” Grebe explains. One of them is particularly active in human cancer cells - but so far nobody knows why. Grebe and his team were able to show that in plants this gene regulates the direction of cell division. “You may think that we are just looking at our root hairs, but we find genes we did not know anything about and that likely also have important functions in other organisms.”

Prof. Markus Grebe studied biology at the universities of Gießen and Sussex, Great Britain. He investigates molecular mechanisms that coordinate tissue cell polarity and sterol dynamics in plant cell polarity. Since 2013, Grebe has been Professor of Plant Physiology at the University of Potsdam and has been researching different aspects of plant cell and tissue polarity.
mgrebeuni-potsdamde