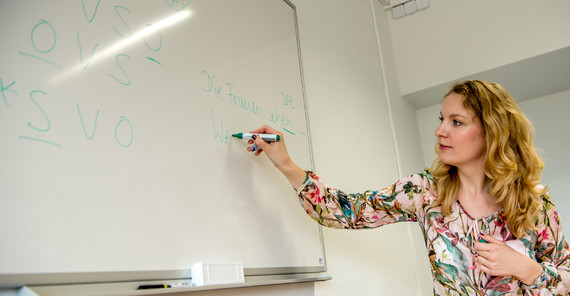 Language is one of the most versatile instruments we possess, thanks to its variability at all levels – from pronunciation to word order. But linguistic flexibility also has its limits, which are of particular interest for linguists. After all, they make sure that we speak more or less the same language. Doreen Georgi is Assistant Professor for Variation and Variability in Grammatical Systems and a member of the Special Research Area “Limits of Variability in Language,” known as SFB (Sonderforschungsbereich) 1287. In her sub-project she investigates whether different languages have common limits, and evidence of a universal grammar may be derived from it.

“Language varies a lot. It actually has to, otherwise we could not express all we want to say,” Georgi explains. “But it does not vary wildly. There are rules that aren’t broken and limits that aren’t crossed.” Like all projects in the new SFB 1287, the linguist wants to make her contribution to describing these limits more precisely. The special feature of her approach is that she is researching not one, but dozens of languages from all parts of the world. “We already know that, at the abstract level, languages function universally. Some rules are unbreakable.”

These overarching structures are the linguist’s research topic. With the aid of selected grammatical phenomena, she intends to identify and describe general rules that apply to various languages. For her, the ultimate objective – the linguistic dream of a universal grammar – is not so much a golden book of rules as it is a set of rules about how various languages interrelate. “All languages have limits, but they are differently weighted. Some may be broken here, others there,” Georgi points out. A universal grammar is conceivable as a compilation of existing rules. “For instance: These are my ten rules – and depending on which of them are considered unbreakable in a language, a certain grammar is derived from it.”

A phenomenon shared by many languages

Among the phenomena Georgi investigates across languages are extraction asymmetries. In most languages, the parts of a sentence may be shifted to various positions. When a part is placed somewhere other than its normal position, linguists call this extraction. If the statement “The man sees the women” is converted into an interrogative clause – “What women does the man see?” – the interrogative word is inserted at the very left. In many languages, this shift is easier to do with some parts of a sentence than it is with others. For instance, it is often more difficult to extract subjects than objects – a phenomenon referred to as extraction asymmetry. Besides, subject extraction is less common, yet in many languages possible, with the help of specific morphological markings only. “It’s always the subject that causes problems,” Georgi says with a laugh. “Linguists have been wondering why for quite some time. I hope we can find an answer.”

Above all, Georgi is fascinated by languages displaying various asymmetries. For instance, in German you can easily ask for a subject, like in “Who sees the man?”. But this kind of question does not exist in the Mayan language Kaqchikel. And while the subject can easily shift its position in German, it invariably takes the same position in English. “We want to investigate languages with various asymmetries and find out: Is there something like a rule in a mental grammar that obstructs subject extraction in general?” Georgi says. She set herself the aim of including as many non-related languages as possible into her research, ideally about 30 languages from almost all continents: Berber and Bantu languages from Africa, Mayan languages from America, Turkish, Italian dialects, as well as Asian languages. Only Australia will be left out. Asked if she also speaks these languages herself, she says no and laughs. “One can research languages without speaking them. – Even though I find many of the languages I have researched so far quite exciting.”

Typology, or the comparison of languages, has been Georgi’s favorite topic for a long time, and eventually earned her a professorship at the University of Potsdam. “I have always been intrigued with the range of linguistic variation in the world. Things we are not used to from our language and would not consider possible,” the linguist says enthusiastically. So while the Mayan language Kaqchikel does not have subject questions, it does allow subject and object questions, such as: “Who saw whom?”. In other languages, grammatical phenomena are expressed only by the tone of the verb – for instance negation in Igbo, a language spoken in Nigeria. “But what fascinates me even more is that theoretical models, patterns and rules can be identified in this somehow wild mix.” This has always been one of Georgi’s main research interests. Her appointment as assistant professor came with the task of conceptualizing her own project for the SFB. As soon as she had arrived in Potsdam, she began to flesh out her draft. The allocation of the SFB by the German Research Foundation (DFG) was a defining moment for Georgi, too, and the actual start for her project.

Together with a postdoc and two student assistants, she is now going through the research literature and countless grammars of languages from all over the world. The team will then develop a questionnaire for the empirical research phase. “We are compiling various factors that we know influence extraction in some languages,” Georgi explains. The questionnaire will then be sent to a large number of speakers of the selected languages. Their answers will help to prove, and interrelate, the results of the theoretical analysis: In which languages do these phenomena actually occur, and under what conditions? Can parallels be drawn between the languages? The results will then indicate what the identified rules have in common, what divides them, and whether general patterns can be distinguished. In a second step, Georgi plans to investigate whether and to what extent these parameters influence each other. “This would be a further step towards a better description of how language works – everywhere in the world.”