Underway in Kenia – February, 15: “Oloonong’ot – mountain of many ridges

Geoscientists on an Excursion in the East African Rift System 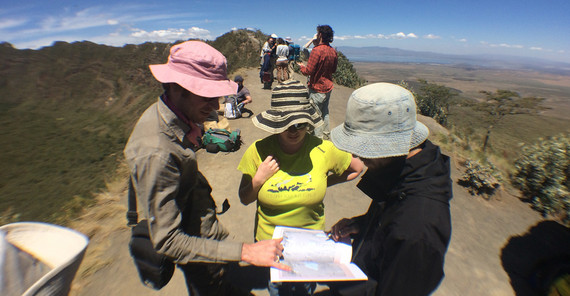 Today we want to study one of the largest caldera volcanoes of the Kenya Rift - Mount Longonot at an elevation of about 2560 m. Although it is known that this volcano is characterized by the injection of gases and magma, it is considered to be quiescent. Here we are, the volcano directly in front of us. Our target is to reach the crater rim to appreciate its caldera and its eruptive history. We start climbing together, but after a while we split up in different groups. We pay our toll in the hot sun and everyone hikes at their own pace, with the tongues out.
After one hour of hiking, we reach the summit where an impressive, deep and wide caldera shows up. Behind us lies the wide expanse of the of the Navaisha Basin in a breathless landscape. We eat some lunch snacks from our backpacks and continue hiking along the rim before descending again, enjoing the view as much as possible through the thick clouds of volcanic ash that we kick up with our boots. The strong wind, however, quickly blows off the dust, but unfortunately some of our hats as well. We wander off trail hoping to spot the savanna wildlife, but our noisy steps scare the animals and we see several giraffes running away. Our walk back to the Longonot ranger station finally leads us through deeply incised valleys that gave Mount Longonot its name. Here we enjoy blooming acacias and even orchid-covered decidious trees that we are unable to identify.
Our immersion into the volcanology of the inner sector of the central Kenya Rift is not finished yet: on the horizon we spot the Kinangop Plateau, a surface with 3-million-old trachyte lavas and ashes at its top that were emplaced during violent eruptions. From drilling projects within the lowest parts of the rift we know that these rocks also exist 2200 m below us; this offset is linked to continued faulting and subsidence along the bounding rift shoulders, and reminds us of the continued tectonic and magmatic activity of this region.
We finally arrive at our next destination, a small hotel in the Lake Elmenteita basin. We are happy about having reached this nice location and just one shower will not be enough to wash away the dust covering us.