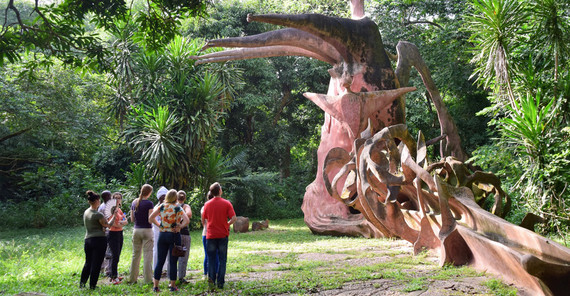 „Spirituality is not about race, it is about soul.“
Priestess Doyin about her mother Susanne Wenger.

Today is a very spiritual and insightful day, even for those of us who have never heard about Orisha religion before coming to Nigeria. Our day starts early in the morning, as we leave the campus of the University for the weekend, to explore the neighboring Osun State. Apart from a driver of the university, we are accompanied by four armed civil security men, which appears to be the normal way of traveling in Nigeria for foreigners at risk of being kidnapped but needs some getting used to from our side.
Our first stop is the town of Ile-Ife. We pay our respects to an elder, who tells us the story of the Oranmiyan Staff – a special and powerful artifact. According to an old legend, the staff belonged to the giant Oranmiyan, the first king of Yorubaland, who won many wars and fathered many kings of other states in Nigeria. A tall stone column served him as a walking stick and weapon. This stick is well-preserved and nowadays people come here to Ile-Ife to pray to it. Every year there is a celebration, when the small garden, where the staff is located, is full of worshippers who believe in the superpower of the staff.
In Ile-Ife we also visit the Palace of the regional Yoruba-King, the traditional ruler of the state. In modern Yorubaland, the King coexists with the official governor and both of them divide the power. While the governor is in charge of administrative matters, the King represents the cultural and religious side of the authority. The palace's unarmed guards give us a small tour of the several courts and explain the spiritual and historic development of the royal dynasty. Because the guards and the elder at the staff speak only Yoruba, we are glad that one of our security men volunteers to interpret for us.
After the visit to the palace we head to our main destination – Osun-Osogbo Sacred Grove, UNESCO world heritage site since 2005. One of the students in the group is currently writing her thesis about the Grove and its UNESCO Nomination; therefore, she arranged a tour of the Grove with a priestess. The priestess's name is Doyin and she is one of the adopted daughters of the late Austrian modern artist Susanne Wenger, who lived and worked here. She found enlightenment in Yoruba culture and religion, where the role of art is regarded as symbolic and sacred. Susanne Wenger created various sculptures in the grove that represent Orisha deities, especially different versions of the goddess Osun, who is said to have her abode there. Osun is personified as the river that encircles the city and runs through the grove. She represents female energy and fertility.
We enjoy a somewhat adventurous walk through the jungle and marvel at Susanne Wenger's sculptures scattered across the grove. Afterwards Doyin takes us to Susanne Wenger's former house, which is still home to her family. We have the honor to see more of her works and even get a glimpse of her old bedroom. Susanne Wenger has a lot of disciples and some of their art can also be purchased as unique souvenirs in a small shop on the ground floor of the maze-like three story building.