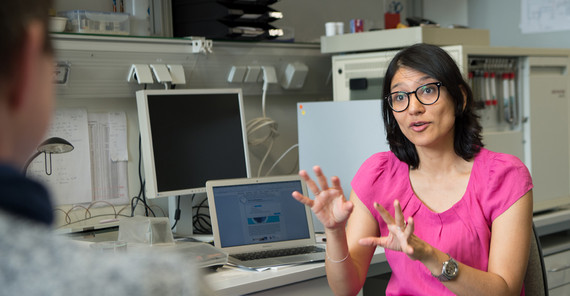 They are everywhere: in the soil, in the water, and sometimes even in the air, albeit often in such small quantities that they are hardly traceable. Many trace elements have been known for a long time – yet more in name than in fact. Only now that they are being used industrially and, thus, becoming more expensive have researchers worldwide begun learning more about them. One of them is geoscientist Dr. Natalia Ospina-Alvarez, who is researching thallium.

In the third main (or “boron”) group of the periodic table of elements, chemical symbol Tl, atomic number 81, grey and soft – very similar to lead – and highly toxic: Thallium. Discovered as early as 1861 by Sir William Crookes from England and Auguste Lamy from France it is not one of the lesser known of elements. “And yet we don’t know much about it,” Ospina-Alvarez says. “Where it occurs naturally, for instance, how it interacts with other elements, and how different concentrations of it affect the environment.”

From “laboratory curiosities” to crucial raw materials for new technologies

Just like other trace elements, thallium came into focus only once it started becoming a problem. Over the past decades, many trace elements – metals in particular – have been increasingly used in batteries or circuits of new technical devices like computers, smartphones, and tablets. If these end up in landfills instead of being recycled, the harmful substances will eventually penetrate the ground. Near mines – where vast amounts of rock from deeper layers are removed and brought to the surface – trace elements are also released and in much higher concentrations than found naturally. This makes them hazardous to plants, animals, and humans. For instance, 800 mg of thallium is enough to kill an adult. This alone is reason enough to investigate how its occurrence in the environment can be better monitored. Researchers from 22 countries have joined forces in the pan-European COST network NOTICE to research so-called technology-critical elements. These include well-known metals like platinum, indium, and iridium; lesser known ones like most rare-earth metals, such as europium, promethium, and ytterbium; and others like gallium, germanium, and – thallium. These former “laboratory curiosities” have become crucial raw materials for the latest technologies. Answers to many important questions, however, remain unknown or at least disputed: in what chemical compounds do they occur in the environment, how do they change, how are they transported, and – above all – how do they influence natural cycles. Not to speak of how higher, toxic concentrations of them affect flora, fauna, and humans.

The first step is a method for detecting toxic concentrations

The researchers have an enormous amount of work ahead of them. The low concentrations in which trace elements occur – as toxic as they may be – make their detection especially difficult. Ultimately, a specific analytical method needs to be developed for each element, explains Ospina-Alvarez, who is responsible for thallium in the NOTICE network. “It’s a bit like baking a cake. You need the right mix of ingredients.” Researching trace elements is nothing new for the oceanographer. In 2003, she participated in a marine research project in northern Spain, where unusually large amounts of arsenic, nickel and zinc in some of the samples aroused her curiosity. She immediately started a parallel project and has since been intensely involved in analyzing toxins and how best to monitor their release into the environment.

Since 2013, Ospina-Alvarez has been collaborating with colleagues in Poland to develop suitable methods for detecting thallium and determining its concentrations – which can be quite a challenge because soil samples, for instance, cannot be analyzed as sea samples are. “Salt water samples are much more complex and time-consuming to analyze,” the researcher says. And not all thallium is alike. “It comes in two forms: monovalent and trivalent,” she explains. “Trivalent thallium is much more toxic than monovalent but comes in much lower concentrations.” Researchers have only recently been able to separate the two forms, so highly toxic thallium occurrences are now detectable. These methods have also been successfully applied to soil samples from supposedly contaminated regions. Ospina-Alvarez and her colleague have, then, taken the first step. “Currently we are working on determining the so-called background concentration of thallium.” In the long run, they want to establish how the element reacts naturally. Only then it will make sense to ask how the continued heavy use of thallium may affect and possibly impair environmental cycles.

Ospina-Alvarez’s next step, then, will be to get out of the lab and head back to the seaside. In the upcoming phase of the project, she plans to develop a method to determine natural thallium concentrations in coastal regions. “The analysis is quite complex,” she says, “but that is fine by me.” It’s no wonder, since the native Colombian has spent half her life by the sea. Her father was a sailor, and her brother is a marine biologist. She moved to Spain to study and has since been at home wherever in the world her research takes her: Spain, New Zealand, Portugal, Poland – and most recently Potsdam. “I have worked in different places around the world. As a researcher, this helps me to keep an open mind – to different ways of thinking, different ways of working,” she says. In the field you have to make quick decisions; here in Germany everything is very structured. A bit of both helps to reconcile the varied approaches in the multi-cultural network NOTICE.

Plants are able to remove toxins from the soil

The network hopes to do more than just catch up on long overdue basic research. The researchers also want to raise awareness that it is high time we are more responsible with elements we know so little about. “We want to show how important these elements are and that we need to find out more about them, because they can be hazardous.” At the same time, the researchers want to develop methods for rehabilitating contaminated soil and bodies of water – with the help of living plants. This technology – known as phytoremediation – uses plants to remove pollutants from soil. Some plants absorb and store them, while others convert them chemically and, thus, deactivate them. In the case of thallium, Ospina-Alvarez and her colleagues experimented with mustard plants as an “ecological vacuum cleaner”. “We grew rows of mustard plants and exposed them to various thallium concentrations,” the researcher explains. “While very high doses killed the plants, medium quantities of thallium were tolerated, and the plants began thriving after an initial stage during which they seemed to adapt.” The researchers don’t yet know what the plants do with the thallium, but the coming months will also help to better understand this.

Thallium is a metal (chemical symbol: Tl, atomic number: 81) which is not rare but occurs in only a few minerals and often as accompanying element. The soft, grey, and ductile metal is used – among others – for a variety of optical glasses, in thermometers, and as high-temperature superconductor. It is highly toxic.

Trace elements are chemical elements that generally occur in low concentrations. What makes an element a trace element depends on its occurrence in a certain environment – for instance, in the human body, on Earth, or in the solar system.

Phytoremediation is a technology that uses plants to clean up contaminated soil or groundwater. A distinction is made between phytoextraction – where plants take up substances and accumulate them in their biomass – and phytodegradation, where pollutants are chemically converted and, thus, deactivated. Researchers discovered decades ago that the principle may also be used for recovering raw materials from the ground – referred to as phytomining.

Dr. Natalia Ospina-Alvarez studied oceanography as well as ecology and sustainable management of coastal and marine systems at the University of Barcelona. Since 2016, she has participated in the Research Fellow Program of the Research Focus Earth Sciences at the University of Potsdam.
Universität Potsdam
Institut für Erd- und Umweltwissenschaften
Karl-Liebknecht-Str. 24–25
14476 Potsdam
E-Mail: ospinageo.uni-potsdamde
http://nospina.tumblr.com/