Underway in the Andes – March, 3 2017: Following Darwins steps to the roof of the Americas

Travel Journal: Doctoral Students on an Excursion in Western Argentina 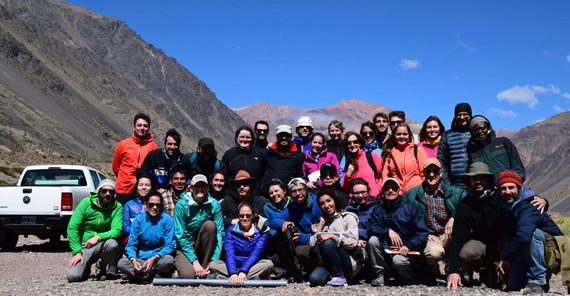 Today we follow the footsteps of Charles Darwin 170 years later after he crossed the Andes from Chile during his famous Beagle expedition around the world. The Precordillera is behind us and we pass the roof of the Americas.

Our first stop is the narrow Uspallata valley, which marks the border between the Precordillera and the Frontal Cordillera. The basin records the different stages of uplift of the Andes. We observe different compositions of sediments and their fascinating colours.

The landscape is now characterized by volcanic dykes and fault systems, which are responsible for the shortening and uplift of the Andes in that region.

We arrive at the famous Inca bridge – a natural phenomenon formed by carbonates and thermal water. The Incas used this natural path for crossing the Mendoza river 11 000 years ago. They are one of the most representative settlers in this area and play an important role in the argentinian culture. Their ruines are well-preserved and touristic attractions.

After lunch, we gain again enough energy to discover the roof of America, the Aconcagua (6959 m asl.) – the highest peak outside the Himalaya. During a hike in the glacial environment we see the typical U-valley, which was formed by glaciers, coming from the Aconcagua during the Last Glacial Maximum (22 000 years ago). Nearby we can also observe huge landslides, which dammed the Mendoza river and formed lakes in the past. Furthermore, rock glaciers, characterized by coarse material and stucked together by ice, feed the Mendoza river with new sediments.

It was amazing to see, that the ideas of Darwin were not that far away from reality considering the lack of geologic knowledge at that time.

We are finishing our day with the typical Asado and wine and experience a nice evening with our argentinian partners and new friends.