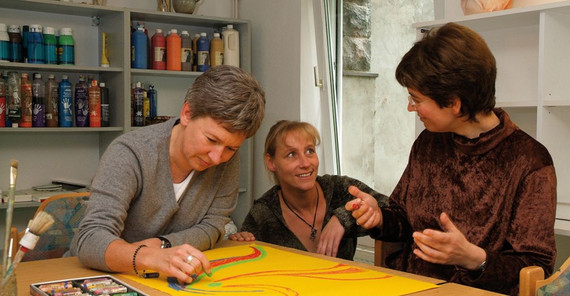 Unemployed people are more likely to suffer from depression than people who are employed. More than one in three welfare recipients receives treatment for mental disorders. These are the findings of a study based on data collected by health insurance companies. The share of insurance benefits claimed for reduced earning capacity due to mental disorders has been on the rise for about 10 years. According to a statistic of the German Federal Pension Fund from 2013, mental disorders are the most common cause for drawing incapacity pension, among women (49%) and men (36.5%), outpacing even musculoskeletal disorders, connective tissue disorders, and circulatory system diseases.

The Brandenburgklinik Berlin-Brandenburg in Bernau is blazing new trails in helping people out of situations that may lead to disease by focusing on outpatient aftercare following hospital rehabilitation. For another few months, the rehab facility and researchers at the University of Potsdam Department of Clinical Psychology and Psychotherapy under Prof. Dr. Günter Esser will be studying how specifically targeted aftercare can help ensure rehab programs for “people in special vocational problem situations” are successful – including the unemployed and those who have missed long periods of work due to disability or whose working capacity has been severely diminished.

The research project is based on a study being done by the University of Potsdam that includes 233 patients of Brandenburgklinik, 119 of whom face special vocational problem situations, and one quarter of whom attend aftercare groups. Among the remaining 114 patients with no such problems, 40% take advantage of aftercare programs. “We want to analyze the reasons underlying this initially surprising result of the study in more detail,” says Prof. Tom Alexander Konzag, Head of the Department of Psychosomatic Medicine at Brandenburgklinik.

The very first results have already shown that those who have a job use outpatient aftercare more than those dealing with job difficulties, yet it is exactly the latter group for whom aftercare is particularly advisable. Have they given up? Do they no longer believe in themselves and their return to the workforce? “Right now, we can only speculate. An outpatient aftercare program is without a doubt more challenging than staying at a rehab facility; you have to organize everything yourself and motivate yourself to take a new path,” Günter Esser says. And this path may be long and arduous. As part of the program of intensified rehab aftercare (IRENA) funded by the German Federal Pension Fund, Brandenburgklinik offers mainly the “Curriculum Hannover”, a type of group work tailored to the needs of medical rehabilitation. The facility providing the aftercare program is located in Fasanenstrasse in Berlin-Charlottenburg. “Obviously a patient from a rural region like the Uckermark who is being treated at Brandenburgklinik will hardly be able to travel to Berlin once a week for six months to attend an aftercare program. We also take such unreasonable effort into account in our statistics,” says young psychologist Susanne Stein-Müller, who is assisting Esser on the project. Even though the current project focuses on the Curriculum Hannover, other aftercare options are also being considered. “Being in a group works for some; others prefer individual therapy. We collect this kind of data, too.”

The 233 study participants will be interviewed four times: before and after their stay at the rehabilitation clinic, following aftercare, and six months after outpatient rehab. “So far, we have only collected data from the first and second measuring points. Now we have to wait for the first subjects to finish aftercare. Later we will check whether the patients are able to stand on their own two feet and how their working capacity and integration into employment have developed. The analysis is done successively,” Susanne Stein-Müller states. The researchers are also planning to match two people with certain similarities – age, sex, education, marital status, or mental capacity. “We want to compare why one person faces a special vocational problem situation and another doesn’t. For most people in difficult situations, there are a number of individual reasons why they are not able to cope,” Günter Esser says.

Differentiated aftercare concepts will be developed based on the results of the study. “We want to optimize the effectiveness of psychosomatic aftercare to ensure long-term success of inpatient rehabilitation and optimize the integration into working life purposefully,” Esser underlines. Studies have demonstrated the effectiveness of psychosomatic aftercare. It remains unclear, however, what factors influence those undergoing rehabilitation in special vocational problem situations and how aftercare could be better adapted to their needs.

Patients undergoing psychotherapeutic treatment in a rehab facility often find it difficult putting their newfound knowledge to use after being discharged. “For therapy to succeed long-term, however, patients must be able to apply the acquired techniques and skills to avoid relapse. Aftercare is about sustainability,” the researcher emphasizes. People in special vocational problem situations often come from difficult backgrounds and suffer from severe mental problems that prevent them from finding a job. “Many of them are unable to cope with situations like writing applications or perhaps having a job interview. Mental problems can be the cause or the result of unemployment,” the psychologist explains.

In 2003, Hanover Medical School developed its Curriculum Hannover for psychosomatic rehab aftercare to help often emotionally frail patients become more stable in their everyday lives. The program consists of 27 appointments spread out over six months. During the 90-minute group sessions, patients learn how to better apply what they have learned. One of the main aims is to build self-confidence and self-assurance while reducing depression and fear. “This is the only way to make plans and resolutions to change your behavior and life a reality. The Curriculum Hannover has the character of a self-help group,” Günter Esser says.

From their research project, the psychologists hope to answer a number of questions: Why is aftercare not well received by those in special vocational problem situations? How can the rehab facility improve therapy planning to attract more people to attend the aftercare program? In his work, Günter Esser focuses on an even more differentiated diagnostics and treatment tailored to the needs of the patient. But he is reserved in his predictions. For him, one thing is certain: “Rehab is just the first step; long-term success manifests itself in outpatient aftercare. But you cannot force people to attend aftercare; you have to find out how best to motivate them,” Esser says.

Susanne Stein-Müller has been a research assistant at the Department of Clinical Psychology/Psychotherapy at the University of Potsdam since 2013. She is writing her dissertation on the project “Predictors of psychosomatic sustainability effects in special vocational problem situations”.

Brandenburgklinik Bernau
The Department of Psychosomatic Medicine at Brandenburgklinik has 140 beds and five wards for patients suffering from depressive, anxiety, trauma sequelae, and somatoform disorders. More than 1,000 patients are treated there annually, 6% of whom are referred to an aftercare therapy group.

Prof. Dr. med. Tom Alexander Konzag studied human medicine at Martin Luther University Halle-Wittenberg. Since 2007 he has been the head physician of the Department of Psychosomatic Medicine at Brandenburgklinik in Bernau.