The Forgotten Duty Journals – Historian Prof. Bernhard Kroener and his team are working on an annotated edition of National Socialist duty journals. 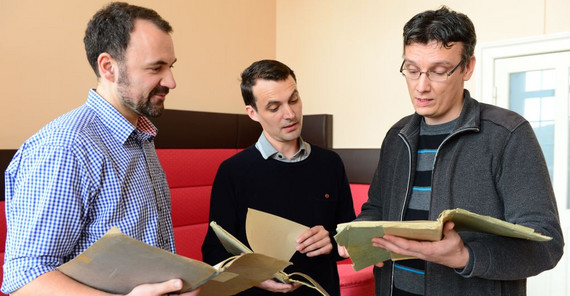 A few years ago Prof. Bernhard Kroener of the Institute of History at the University of Potsdam made a very interesting discovery. While doing research for a biography on Friedrich Fromm, Chief of Army Armament and Commander-in-Chief of the Replacement Army, he came across a source in an old publication that had previously received little attention: duty journals kept by Nazi Wehrmacht officers. Fromm’s Chief of Staff logged meeting minutes, telephone calls, and events in the daily work of the military leadership in Berlin’s “Bendlerblock”.

What makes the discovery of the journals even more spectacular is the journey the duty journals took after World War II. Kroener’s research revealed that they had been archived in the London Imperial War Museum, where the British Secret Intelligence Service had deposited them at the end of the war. Once there, historians paid little attention to them. Since the notes were difficult to decipher, the archive director ultimately decided to give the originals to the Potsdam researchers to be transcribed.

“When you leave the well-trodden paths of research, you may stumble upon one or two nuggets,” Kroener says smiling. The coincidental discovery of a source in a footnote is as spectacular as the significance of this source for military-historical research. Kroener and his team have already been studying the journals for seven years. Once the annotated edition of the “Duty Journals of the Chief of Staff at the Chief of Army Armament and Commander-in-Chief of the Replacement Army from 1938 to 1943” is published as planned in 2016, Kroener will hand the historical source over to the German Federal Archive. So far the notebooks have been transcribed through the second half of 1942.

The journal entries span 31 May 1938 to 31 December 1943. The last volumes of 1944, presumably kept up to July and whose last part Claus Schenk Graf von Stauffenberg wrote, are considered lost. They were confiscated after 20 July 1944 for investigation into the assassination attempt on Hitler, at which point the trail goes cold, most likely as a result of being intentionally burned in the final days of the war. Four different people held the office of the Chief of Staff between 1938 and 1943: Colonel Ziegler, Colonel Haseloff, Major General Köhler, and Major General Kühne. Their notes fill 24 rather thick notebooks and document about five years of military history “taken daily on the chief of staff’s knees, sometimes in chicken scratch,” Kroener says.

Many handwritten notes are jotted down in catchwords or stenographically. Words are often abbreviated and sometimes whole syllables are missing in the middle of a word – all this in the no longer commonly used Sütterlin script. “That has proven more problematic than we initially thought,” Kroener admits. Four researchers studied the journal entries projected onto a wall and puzzled over the illegible notes. In order to transcribe them, the research team even tried to find the son of the Chief of Staff Köhler, now over 80 years old. “He was able to decipher many abbreviations; after all he knew his father’s handwriting very well,” says the historian. “Some passages, however, also remained a mystery to him.” The result of this tedious work is nevertheless impressive: Kroener has deciphered an outstanding, overlooked source on the military organization of the Wehrmacht during World War II. The journals have even enabled the historian and his team to make psychological statements from a previously unknown perspective of people in Bendlerblock, the impact of the ongoing world war, and the resistance to the Nazi regime.

For Kroener the value of these journals lies, above all, in the fact that they are the only central, chronological document of the history of army armament immediately before and during World War II. They illustrate, for example, the burdens   of war, particularly due to dwindling material and human resources. Colonel General Friedrich Fromm, Chief of Army Armament and Commander-in-Chief of the Replacement Army from 1939-1944, and his Chief of Staff faced demands of military forces that had to go increasingly unmet – forces that had been sent into a criminal war of conquest and extermination by the Nazi regime and its leadership. The journals are evidence of the writer’s growing exhaustion in light of an unwinnable war. “They show states of mind, the pressures of war, and the strain on the personnel, and this is why this source is so exciting for research. It is completely authentic and very close to the events.” These notes were never meant for public eyes. They served exclusively as internal minutes and a calendar. The journals were locked in a safe in Bendlerblock every night. “These notes, unlike documents handed over to superiors, were only meant for the writer.” They offer an insider view of tensions between various Wehrmacht branches, illustrate jealousy, interdepartmental rivalry, and conflicts of who was responsible for what. Everyday events were meticulously documented and immediately assessed by the writer. “You get the feeling you are sitting right next to the writer,” Kroener says.

The duty journals therefore also tell a lot of stories. For example, a soldier  was sent from Berlin to Paris to obtain wine for the officers at Bendlerblock. A Commander-in-Chief stationed in Norway sent lobster to Berlin because he hoped someone would send him more material and personnel. “This is what life was like at that time. You won’t find this in any other source.” The journals also contain private matters of the military forces at Bendlerblock. Fromm’s son borrowed some money from the Chief of Staff, who presumably jotted this down in the journals so as not to forget it. Such mutual trust between the Commander-in-Chief of the Replacement Army and the Chief of Staff becomes repeatedly evident. “Ziegler, Haseloff, and Köhler were particularly close with Fromm, sometimes even in private matters,” says the military historian.

Until the end of the war the journals had been stored in a safe of Bendlerblock, the former military headquarters and center of military resistance. The duty journals kept under Fromm and the Chief of Staff therefore also reveal how the military forces were involved in the “Operation Valkyrie” and the assassination attempt on Hitler on 20 July 1944.

Kroener has been researching Friedrich Fromm for more than two decades now. He is particularly interested in why Fromm has consistently been called “Janus-faced, “two-faced”, and “insincere” since the end of the war. He advocated ending the war in 1941 and was arrested in connection with the Stauffenberg assassination attempt on Hitler and executed by the Nazi regime in March 1945. As Chief of Army Armament and Commander-in-Chief of the Replacement Army, Fromm chaired the meetings logged in the duty journals from 1938-1944. After 20 July, the day of the assassination attempt on Hitler, the journal entries stopped. Fromm ordered Stauffenberg and three other conspirators shot on the night of 21 July but was himself arrested by the Security Service (SD). The regime might have considered it most unlikely that he had not known about the attempted assassination. According to Kroener, the preparations for the assassination attempt and the resistance in general were indeed apparent in the journals. “You can see that Fromm was involved. He was in it up to his neck,” Kroener says. “Such meetings of chiefs no longer took place after 20 July.” Instead of subjecting the main witnesses to torture at the hands of the regime, Fromm had them shot. This decision irrevocably subjected him to the Nazi leadership’s vengeance. Other officers involved in the assassination attempt were sentenced in degrading show trials and brutally executed.

Kroener considers it a prerequisite of academic historical work to interpret historical personalities with critical distance regarding their lifetime work as well as addressing one’s own preconception as a historian assessing events after the fact.  “What remains of a person is not least what we write.”

Since 2007 Kroener has been working on an annotation of the edition with Paul Fröhlich and Alexander Kranz, both of whom are writing their dissertations on the duty journals. Sebastian Szelat is primarily working on transcribing the 24 notebooks. The edition will be published in 2016 by Schöningh, the publisher of Kroener’s 2005 biography Colonel General Friedrich Fromm. The annotated edition of the duty journals – consisting presumably of three comprehensive volumes – and Fromm’s biography will be a key contribution to historical research on the German army armament, filling the gaps of world war historiography.

Prof. Bernhard Kroener studied history, classical archology, and political science in Bonn and Paris. He started working at the Research Institute for Military History in 1978 and at the University of Freiburg in 1984. Starting in 1997 he was Professor of Military Studies at the University of Potsdam until he was emerited in 2013.