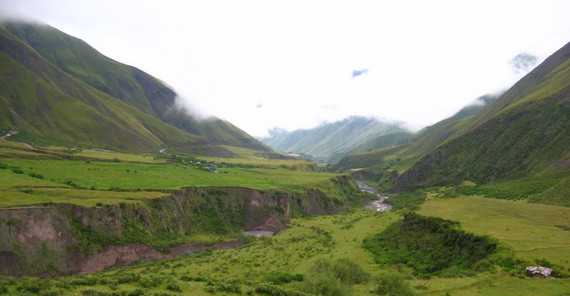 Landscapes change over hundreds of thousands, even millions of years. Tectonic events and erosion create mountain ranges and remove them again. The climate also leaves traces in the landscape over time, particularly if it changes dramatically. Such processes occur faster in some places than others, like in the Argentinian Andes, reason enough for Taylor Schildgen and her team from the Institute of Earth and Environmental Science to travel to northwestern Argentina and examine how extensive climate changes have affected a landscape – in the distant and recent past – and will probably also affect it in the future.

Big mountain ranges with steep slopes like the Andes particularly appeal to geoscientists and environmental scientists: “We hope for explicit results at such places,” Schildgen says enthusiastically. Steep slopes often show greater erosion and thus change more rapidly, and even neighboring landscapes can differ greatly. The geologist would know given her intimate and long-term relationship with the Andes. Her dissertation at the renowned Massachusetts Institute of Technology (MIT) dealt with the development of the world’s longest mountain range, which extends throughout South America. During her Peruvian expeditions the American researcher met the very German scientists she now works with side-by-side. She moved to Potsdam in 2008 after completing her dissertation, but never lost interest in the Andes. “In the meantime I have been working in many other regions, mainly on the Anatolian Plateau,” she says. “In 2009, I returned to the Andes. I applied for this project in 2012, and we got started in February 2013.”

This project, the Emmy Noether Junior Research Group, includes three PhD positions and a post-doc position that Schildgen, as the group leader, can fill depending on research requirements. It is a new responsibility for the young researcher, as she herself admits. She embraces it because she would not be able to manage the project by herself. The group is confronted with a mountain of work—literally. She is investigating how certain landscapes react to climate change, in her case the Andes. The challenge lies in the word “change”. Landscapes have always changed and been influenced by various factors. Schildgen and her team, however, are interested in the effects of drastic climate changes. This is why her “journey” has taken her through Andean history – by analyzing sediments. “We can ‘read’ the previous erosion rates in the isotopic composition of sediments and reconstruct how the system responds to different - wet and dry - periods,” Schildgen explains. In principle, researchers assume that landscapes have different levels of sensitivity to climate change. Comparing older and more recent erosion rates offers more details and might show how long it takes for a landscape to respond to climate change, how strong the reactions are, and how long it takes for new, stable conditions to be created. The geoscientists also hope to be able to describe processes that influence landscape changes. “We want get past our qualitative understanding of increased precipitation leading to higher erosion rates,” Schildgen asserts. “Our main goal is to be able to predict specifically how landscapes react to climate change.”

A central aspect is developing models based on analyzing the collected data but the project goes even further. One group member will be focusing only on modelling. Schildgen is looking forward to this project phase. “It is a bit like a game from which we expect a lot.” Ideally these models will be applied to other landscapes, but first, sediment samples have to be collected and analyzed. Schildgen and PhD student Fabiana Castino were onsite in July 2014. The many small bags that now line the shelves of their office on the Golm campus await Stefanie Tofelde, the team’s other PhD student, who chemically analyzes samples and determines erosion rates of the investigated area at different times – and how they relate to climatic changes. “We use two different methods,” she explains. “To determine the erosion rate, we isolate specific minerals from the sediment, in this case quartz, and measure the concentration of a certain isotope (beryllium-10).” Sedimentary deposits reveal past erosion, and the team gets current comparative values from “young” river samples. Tofelde then collects information about past and present climatic conditions and changes, again measuring isotopes but this time in organic material that has been subjected to changing climatic conditions. “The principle is the same,” she says, “Material from today’s rivers reflects the current climate. Material deposited long ago provides information about the climate in the past.” Although this procedure sounds very simple, the actual work is complex and tedious. Chemical lab analyses often take several months, and it may even take up to year before results are available.

Inspecting the “objects of desire” is undoubtedly beneficial from time to time. Tofelde spent a few weeks in Argentina in March 2014 looking for suitable deposits and will return again in March 2015 to do geological fieldwork. She explains that the reason for this rhythm is very simple: “There are no teaching commitments because it is semester break, and the rainy season in Argentina is over.” For Tofelde, who studied biology and geology, the project is more than a stroke of luck. The variation of working in the field, in the lab, and at the desk especially appeals to her. “Each project helps you to understand a bit better why a landscape looks the way it does and how it might look in the future.”

In the lab, the young researcher works with material that is usually between a few thousand and 100,000 years old. Some of the current samples are only about 60 years old. The scientists are particularly interested in the Humahuaca Basin, which has changed dramatically over the past decades, Schildgen says: “Some rivers are filling with sediments extremely fast, sometimes 2.5 meters in just 20 years. This sediment has buried much of the transportation infrastructure, which will have to be completely rebuilt.”

The climate changes that preceded these abrupt erosion rate changes happened only a few decades ago. The researchers can even refer to data from the regional meteorological station. Castino traveled to this region in summer 2014 to examine this data. It shows the potential of the project, should the models be successfully transferred and be able to predict the landscape changes due to climate change. Schildgen knows this very well. “Political stakeholders have already expressed interest in our research. After all, creating action plans would be a big step forward and could restore stability in regions like Humahuaca.” But until then it will remain a rocky path.

Taylor Schildgen, Ph.D. studied geology in Edinburgh and Williamstown, MA. She came to the University of Potsdam in 2008 after finishing her dissertation at the Massachusetts Institute of Technology. Since February 2013 she has been the group leader of the Emmy Noether Junior Research Group “Geologic reconstructions of changes in erosion rates and Phillslope processes in response to climate forcing”.

Stefanie Tofelde studied biology in Constance and geology in Potsdam. Since 2014 she has been a PhD student in the Emmy Noether Junior Research Group “Geologic reconstructions of changes in erosion rates and hillslope processes in response to climate forcing”.