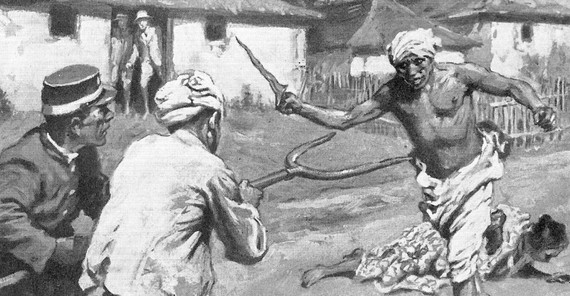 They are acts of violence triggering exceptional horror and disbelief – shooting rampages often claim many lives. Most victims happen to be in the wrong place at the wrong time. Such extreme acts of violence, however, are not a contemporary phenomenon but also have a historical and cultural dimension. Potsdam researcher Heiko Christians explores the phenomenon’s historical roots and the role of media.

Panic at Steuben High School in Potsdam: A student discovers a warning of a shooting rampage in the girls’ restroom in March 2014. Gruesome images immediately spring to mind. Shooting rampages have become a sensitive issue because of catastrophes like those in Columbine, Erfurt, Winnenden, and the Norwegian island Utøya. Many schools now have special alert systems to more quickly spread news of a shooting within the school building and thus protect themselves. At Steuben High School in Potsdam, the warning is taken seriously. Classes continue, but police carefully guard all entrances.

“It is safe to assume that people don’t commit such terrible acts spontaneously, but instead plan them well in advance,” says media cultural historian Professor Heiko Christians. “It takes people a while to condition themselves so as to be able to systematically execute their rampage. Anders Behring Breivik appears to have spent five years planning his attacks and prepared himself for his shooting rampage on Utøya and bombings in Oslo with music and medication.” Heiko Christians has studied rampages in depth and released Rampage: History of a Proliferation in 2008.

Christians approaches the topic historically and analyzes how the phenomenon had been treated before everyone started talking about it. Media is always at the center of his attention and is always linked to history, the professor of media cultural history hypothesizes. “When we act as cultural beings, we always act through media,” explains Christians. “Historical awareness has existed only since we started writing things down. We can recall only as far back into the past as our unaided memory allows. Only once we started writing on rocks, palm leaves, animal skins, and papyrus did we create history. For this reason alone a history of culture without media history is nonsense.”

The University of Potsdam was, for a long time, the only university implementing this approach, in which cultural history and media history were no longer viewed and taught separately. At the Institute of Arts and Media the consensus is that everything should be historicized with a clear awareness of the mediality of cultural practices. There are, however, historians who still see it differently. “They talk about event history or maybe structural history or social history, but infrastructural history and media history miraculously remain separate fields,” says Christians.

During the winter semester 2004-2005 Christians offered his first course on rampage shootings. He wanted to see whether the topic could fill 14 lectures of 90 minutes. “Lectures are always a good instrument to portion a topic, to sort its history chronologically, and to break it up into a series of questions. Unfortunately this has become more difficult with the new BA and MA system because lectures no longer represent ongoing research but are usually limited to basic knowledge and introductions. This is something I really regret.”

“Rampages have a history” – in 2008 this claim alone was often met with incomprehension, remembers Christians, who studied Modern German Literature in Cologne under Wilhelm Voßkamp. “It was an incredibly tedious task to give rampages a reality beyond people’s immediate shock and determination to prevent them in the future.”

Rampages have their historic roots in the then-Malayan cultural region—present-day Indonesia. Starting in around 1600, travel journals started to occasionally mention warriors of the Malayan kingships and principalities going on rampages. The local colonial powers, especially the English and the Dutch, saw them as a threat to the imposed order and punished the warriors draconically.

During the Enlightenment the discourse surrounding such crimes changed, shaped by Kant’s and Blumenbach’s “enlightened” teachings on race and color, which differentiated between “brown”, “yellow”, and “black” and attributed stereotypical character traits to each. In the 19th century, however, such acts of violence were no longer subject to a collective theory of color and character, but were instead individualized, meaning they were psychopathologized. The perpetrators were treated as ill and were detained and observed in the state insane asylums that had been founded in around 1850. The earlier sociological and ceremonial context of rampages therefore vanished. Yet this context did exist in the Malayan perception. Rampages had a function: After a certain point, an insult had to be cleared up through a repertoire of martial acts. The balance and reputation of a warrior and his family were thus restored, visible to all. The colonial powers denied this context. They instead saw rampages as signifying nothing but pathological craze.

Only in 1948 after the US Pacific fleet under McArthur had forced out the Dutch and no colonial powers remained on the emerging territory of Indonesia could rampages no longer be communicated solely as a colonial-exotic phenomenon. This endeavor shifted to Western travel and entertainment literature until the 1970s. The former colonial doctors in Stefan Zweig’s bestselling 1922 novel Amok belatedly became a reality.

Many of those acts retrospectively classified by the media as “rampages” were actually committed by Korean and Vietnam Wars veterans. The first classic case of a “campus shooting” happened in 1966 in Austin, Texas. A former member of the United States Marine Corps randomly shot people from the observation deck at the University of Texas – Austin. “This is also the first rampage documented by film, which allowed the topography and motifs of the modern rampage to spread through the moving-image media,” explains Christians.

“Yet the role of media is not new. Something resembling a modern entertainment literature started in the 17th century, and rampage shootings immediately became a recurring motif. Then, in the 19th century, rampages completely dissolved into racist journalism. Malayans were depicted as either idle, disobedient, cowardly, and passive or explosive, homicidal, and raging amidst the colonial powers. The colonial powers used this double stereotype to justify a ‘paternal-strict’ regime, to implement corresponding values, to install an ever-tighter administration, and to Christianize the people,” explains Christians.

The media was, therefore, central from the beginning and significantly shaped the discourse on rampages. Only the type of medial preparation has changed. It is no longer only textual, but also filmic and thus compatible with computer games. “It is an easy motif for film adaptions. To some extent, huge metaphoric apparatuses have been created,” explains Christians.” He finds it especially problematic that “not only the phase of initiation, which remains invisible, is difficult to visualize. It is also a challenge to visualize the outburst itself without showing the real blunt and serial brutality of the act,” says the media cultural historian.

Even though rampage shootings are not losing their topicality, and Heiko Christians is often being reduced to the issue, his thoughts are currently in a very different place. His book Crux Scenica. The history of the scene from Aeschylus to YouTube comes out next spring, in which he examines scenes as a “tool” independent of theater and film reality. Christians traces the historic origins of the scene as an instrument and discusses various questions: Where is the scene used? What are its functions? Which capabilities make the scene omnipresent? Why are scenes more effective in representational contexts than entire stories? Together with colleagues from Princeton and Cologne, Heiko Christians is also editing a comprehensive historical dictionary of media usage, which will be published this year by Böhlau and presented during the Frankfurt Book Fair. “With this dictionary, we want to give a historical reality to media usages like leafletting, radio transmitting, and channel surfing, which we practice everyday anyway.”

Besides psychosomatic factors, rampages are also shaped by media usage. “The shooters are not always lone wolves who spend their whole weekend in front of a computer. On the contrary: Many are well connected to their friends until just before the rampage. That means that an unsolvable part remains, one which also makes the whole thing so menacing,” says Christians. “I think that the person who announces his rampage in big letters on a restroom door is probably not going to go through with it.” In the case of the high school in Potsdam, fortunately, this was true.

Professor Heiko Christians studied German studies, philosophy, pedagogy, and Dutch studies in Cologne. Since 2008 he has one of the rare chairs of media cultural history at the Institute of Arts and Media at the University of Potsdam.