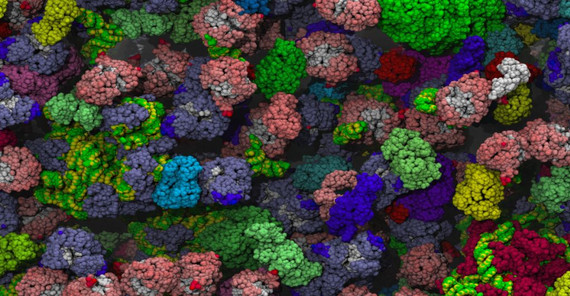 In the “molecule soup” of cells, it is “like on a train platform after a football match. They all bump into each other,” the physicist says. Picture: Adrian Elcock

Beginning where others stop and describing the indescribable indefinable are Ralf Metzler’s passions. Statistical mechanics is his hobbyhorse. The professor of theoretical physics at the University of Potsdam uses mathematical models to examine molecular motion within cells, and not just a few of them but millions and millions. Experiments based on these models then have to verify whether the models’ predictions were correct. Metzler collaborates with biochemists, biophysicists, chemists, and material researchers. He considers references back to applied research both self-evident and very interesting. “In theoretical physics, as in physics in general, nothing works without experiments. You always have to see how your research connects with reality.”

A big whiteboard hangs on the wall in Metzler’s office. It is completely filled, mostly with formulas. This is fascinating for laypeople, although incomprehensible and even a bit intimidating. Children’s drawings “rule” the bottom of the board – a house, laughing people, a garden. Anybody can write on this board, Metzler explains. Research demands continuous exchange—“gabble” as the native Swabian calls it and laughs. The drawings, however, are sacred and must not fall victim to any formulas. They are proof of his daughter’s visits and a piece of reality, which is also indispensable here.

Bringing together two apparently different worlds is no problem for Metzler and is even a matter of course and his main objective. Complex things should be explained in simple terms, he underlines. “As a physicist, you should be able to explain what you research. Everything that actually happens, we can also grasp with our imagination.”

He speaks about his work in images and not formulas. He is currently researching gene regulation, in other words processes in cells and how they are controlled. In the “molecule soup” of cells, it is “like on a train platform after a football match. They all bump into each other,” the physicist says. Observing details in this confusing jumble is difficult – the interacting particles are just too tiny. Both the technology and means for observing and tracing such small elements have been experimentally developed only very recently. You cannot exactly observe and explain the interactions because there are simply too many particles permanently influencing each other within a cell. This is where “statistical mechanics” comes into play. “Mechanics, as we learned in school, exactly describes the movements of two spheres, but when there are three this is no longer possible. What does work, though, when you have so incredibly many particles is observing all of them at once rather than individually. Then we’re back in business,” Metzler says triumphantly. “Then it’s just a matter of probabilities, the typical behavior of particles – like thousands of people in a football stadium … and then you conceptualize this in wonderful mathematical terms.”

Austrian physicist Ludwig Boltzmann developed the basic ideas of statistical mechanics that translated the idea of thermodynamics into the language of modern physics. Originally intended to make the steam engine more efficient, it has only started to gain traction in biological physics and microbiology in the last few years. “A little revolution is taking place”, Metzler says. “For a long time the many processes taking place in a cell within the narrowest space had been viewed in isolation – protein X was combined with Y in an aqueous solution and then observed. The elapsing processes were mainly seen as time-dependent. We now know that place and proximity of the cells are equally important.”

A large part of gene regulation and signal dispersion within cells happens in the form of diffusion – based on thermal balancing motions of the molecules. “It is like a lump of sugar that you put in your tea. After a while it evenly sweetens the tea. It is also like the olfactory molecules of a good perfume you can smell almost immediately throughout the room,” Metzler says. The process, however, cannot be traced back through experimental observations. The interaction of the innumerable molecules is simply too complex. This is where physicists enter the turf of the biologist, the researcher explains, “because we speak a different language. A biologist always sees features and complexity of an individual cell. We observe it as something abstract and then build our models around it through probability calculation.”

You ultimately need both, the physicist says: an innovative, abstracting approach and its practical, experimental verification and application. “Only if our predictions come true will we be taken seriously, and this is exactly where we are at the moment.”

Metzler is currently analyzing the active transport of substances within a cell by intracellular motors. If we manage to understand this mechanism so precisely that we can capture it, delivering medicine to the desired locations in cells would be much easier. This idea is still a long way off. There will be lots of new formulas on the board in Metzler’s office, but he is optimistic. The so-called Handkerchief Laboratory is already the next step. In this collaborative project, Metzler’s team is collaborating with colleagues at the Fraunhofer Institute for Biomedical Engineering (IBMT) and other German research institutions. The idea is simple: When you blow your nose into an “intelligent” handkerchief, it will “recognize” whether it is a serious flu or just the common cold. You have to know how viruses move before you can recognize them on a tissue. Metzler and his team have been able to model exactly this. Now it is the engineers’ turn.

He thinks that the possibilities of statistical mechanics have not yet been exhausted. This could help to develop models for the motion of many molecules – their swarming behavior – in other fields and on larger scales: How do diseases spread? How can we organize traffic? How do crowds move? “The world of cells is definitely the ideal scale for our models of passive motion because it is governed by diffusion through thermal excitation. Of course, this does not apply to humans who actively move. But what if other dynamics take hold, for instance in jostling crowds or in case of a panic? Then it is getting closer to this matter,” Metzler explains. “It does no harm to take a broader view from time to time to see what might still be scientifically possible.” Metzler has recently invited scientists from all parts of the world to Potsdam to investigate crowding. And they “gabbled” a lot, the Swabian says with a smile. “We really got down to business,” he adds, contended.

Prof. Dr. Ralf Metzler studied physics and received his PhD at Ulm University. Since 2011 he has been Professor of Theoretical Physics at the University of Potsdam.