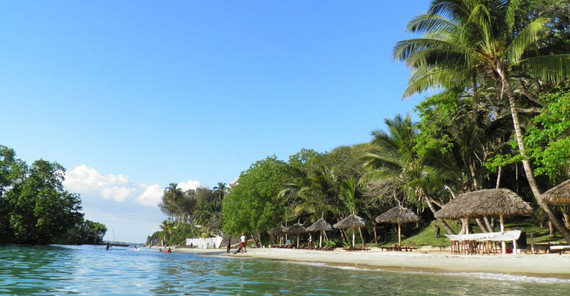 Torsten Lipp, a geo-ecologist, wasn’t on a holiday trip; he was conducting scientific work on a fact-finding mission in Zanzibar. He worked for one week together with on-site partners, exploring the world behind the glossy advertisements. He saw how garbage and wastewater are being dumped in mangrove forests, how many newcomers build houses and dig wells in an unregulated way, and how salt water is leaching into the groundwater. Then he also discovered that plastic bags have been forbidden on the island for years, and that the residents are successfully planting and harvesting seaweed on the ocean floor. Light and shadow within the narrowest of spaces – this group of islands, which belongs to Tanzania, is surrounded by the Indian Ocean and is threatened by flooding.

This journey, which was financed by the German Academic Exchange Service and the Federal Ministry for Economic Cooperation and Development, is meant to gauge the opportunities for cooperative ventures with representatives from the state university, the administration, and non-governmental organizations. As Torsten Lipp from the Working Group for Landscape Management at the Institute for Earth and Environmental Studies at the University of Potsdam says, this contact results from a climate partnership between the city of Potsdam and Zanzibar. After all, what could be more appropriate than two universities working together on similar topics? Students will be able in the future to write Master’s theses on questions related to Zanzibar’s climate and environment. “We’ve developed about ten topics from which they can choose,” says Lipp. These topics include rising sea levels, settlement developments, waste and wastewater disposal, nature preservation, and biological diversity. Students can take up such positive examples as the recently expanded Jozani Forest National Park, which provides the indigenous colobus monkeys more living room than before. “Much like wolves in Brandenburg, monkeys in Zanzibar cause losses to farmers, who receive compensation from a fund. This is because the monkeys don’t always stay within the park boundaries.”

The arrival of increasing numbers of people from the mainland is taking place in a largely unregulated way. Families build their homes along streets, in plantations, or in the forests. They dig their own wells. The groundwater rises, and salt water comes in to fill the void. Lipp tells of the former German honorary consul in Zanzibar, who didn’t have water or electricity for three months in her accommodations. “So she connected her house to a neighbor’s well.” Lipp recommends community wells that are built at the right place. The administration apparently knows about all of these problems, and there is also “Zanzibar’s Climate Change Strategy,” a guide for shifting environmental policy. But the actual problem is explaining things to the population, along with the lack of money. One possibility for financing could be to apply for funding from the World Bank, says Lipp. The administration in Zanzibar has just received funding from an Alexander von Humboldt Foundation program that is directed at scientists from developing countries. The scientists from Potsdam want to create networks, provide information and offer advice, thereby contributing to rescuing nature. Lipp names a couple of examples: an organic water-treatment plant, or the conversion of salt water to drinking water. They will offer help to their African colleagues and learn from them, these friendly islanders with the long beaches and azure blue waters. And the water is warming up. A vague prognosis indicates that water temperatures will climb by two degrees Celsius by 2050. The consequences of this trend are already being felt: the seaweed under cultivation, which is processed into soap and textiles, is suffering and has to be planted ever deeper on the ocean floor.