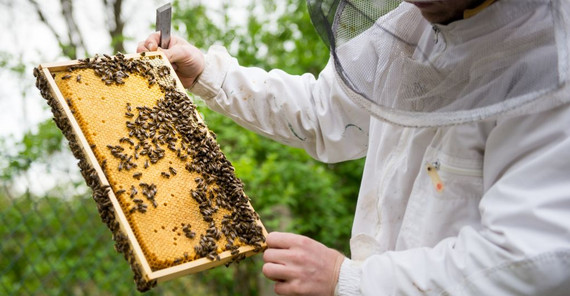 Their industriousness is legendary. Without them there would be no fruit. Of all plants dependent on insects over 85% are pollinated by bees. Their economic significance exceeds that of all other farm animals, a fact often underestimated. It is only now as they often die mysteriously that there is growing concern. Experts worldwide are searching for solutions. Computer models are supposed to help identify the dangers.

A bustling hum fills the air. Though an early spring has forced the bees to fly out prematurely, they find ample forage in the Petzow orchards at Schwielowsee lake. “They are doing well,” says Richard Kowitz, his eyes probing the beehive before carefully closing it again. “You must not disturb them unnecessarily. They do not need us humans.” The young beekeeper, whose primary job is environmental engineering, treats the animals with great respect. After years of living with them, he has developed a feel for distance and proximity. This practical knowledge is indispensable. Despite economic interest in the golden “bee juice”, he carefully considers each step that might interfere with the “super organism” that is a colony.

Avoiding any kind of stress is important. Varroa mites introduced from Asia, monocultures and agricultural pesticides, mild winters due to the climate change, and a generally diminishing biodiversity have all put a terrible strain on bee colonies worldwide. Whole colonies are dying in North America, where the insects are often transported thousands of kilometers in order to pollinate various producing regions. Environmental activists and ecologists are sounding the alarm, increasingly invoking Albert Einstein’s quote that humans would have no more than four years of life left if the bees disappeared. This would mean no harvesting of fruit and crops as well as no livestock feed.

Experts are intensively looking for causes of bees’ mass death, measuring the influence of different stressors in complex field studies, and exchanging their data at international congresses. By now it has become evident that there is likely not a single cause but rather a calamitous combination of different factors. “We call it multiple stressors,” Grimm says, who is Professor of Theoretical Ecology at the University of Potsdam and the Helmholtz Center for Environmental Research in Leipzig. The scientist is interested in the interaction of individual factors and their consequences for the ecological system. The synergetic interplay of stressors can damage a system more than the sum of all single stress factors, which holds true not only for bees.

Like the beekeeper Kowitz, Grimm also looks beyond the individual bee to the whole population as an organism capable of collapsing like any other complex system if under too much stress. He does this, however, using computer modeling rather than being out in nature. More than a hundred parameters represent the conditions of food intake, the influence of climate change and the risk posed by pest infestation and pesticides, and many other aspects. Given Grimm’s expertise as a theoretical ecologist, he supported the German biologist Matthias Becher from the University of Exeter in developing such a model. While you can often examine the effect of only one stressor on a population in a specific region through time-consuming and labor-intensive field studies, you can enter the specific data of various parameters into the computer program and correlate them, for example the number of eggs, larvae and worker bees, temperature and precipitation, quantity of honey and pollen stock as well as the sugar content of the nectar. It even considers the distance a bee has to fly to its food source. Beyond this, it considers the potential infestation by mites that transmit the harmful viruses that weaken bee populations. By exploring multifactorial causes, it will assess imminent danger and provide specific prevention. “Although we had to completely ignore some details in the model or simplify them a lot, it is very complex and comprehensive,” says Grimm, who checked each of the more than 6,000 lines of the computer program used to simulate the model. Even the slightest mistake would have a huge effect and distort the prognosis, the biologist explains, referring to the sensitivity analyses necessary to make the model robust. In contrast to previous models, this one not only captures the processes in the beehive but also the surrounding conditions, mainly the availability of pollen and nectar. For both ecologists and beekeepers this instrument helps them assess risk and take preventive action. The ambiguously named program “Beehave” can be freely downloaded from beehave-model.net. Anyone can use it. Environmental engineer Richard Kowitz, for one, appreciates the rich practical knowledge of past beekeeper generations as much as new scientific findings.

Developing predictive models transparent and realistic enough to support decision-making in environmental management is exactly what motivates Grimm’s research. In a future project he wants to collaborate with beekeepers and farmers throughout Europe. The overcultivation of rapeseed, for example, presents a real problem because bee colonies grow quickly when rapeseed blossoms. After it has withered the colonies can no longer meet their increased nutritional needs. “Two weeks of hunger in June are a severe disruption. If pesticides are also used, it can become critical for the bees,” the biologist explains. He wants to improve the models so that practical scenarios can be tested in realistic landscapes, for example structures rich in blossoms where the bees are certain to find food and can work undisturbed from the first flight in spring into the swarming summer season through to the foraging of winter stocks.

Grimm tries to fill his students at the University of Potsdam with enthusiasm for modeling such ecological scenarios and processes. Although this kind of work does not fit the classical picture of a biologist in nature or a laboratory, an increasing number of young scientists are interested in it and are discovering the possibilities of such models that help analyze and understand the dynamics of complex systems like bee populations.

Prof. Dr. Volker Grimm studied biology and physics in Marburg where he got his PhD in 1994. He became a professor at the University of Potsdam in 2003. Since 2012 he has been Professor of Theoretical Ecology at the Institute of Biology and Biochemistry, a joint professorship at the University of Potsdam and the Helmholtz Center for Environmental Research - UFZ Leipzig.