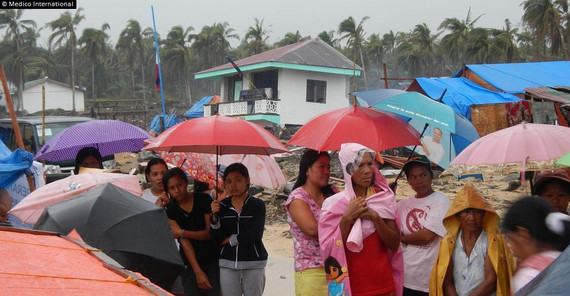 With its 7000 islands, the Philippines is the world’s fifth largest island country – and a holiday paradise. Lying at the border of the Philippine and Eurasian Plates, the archipelago is vulnerable to volcanic activity and earthquakes. The United Nations University – Institute for Environment and Human Security ranked the Philippines as having the third highest disaster risk in the 2012 WorldRiskIndex – after Vanuatu and Tonga. During the rainy season from June to November, typhoons and the Southwest Monsoon bring heavy rainfall, resulting in floods. The disastrous enormity of typhoons has been known at least since Haiyan in November 2013. To mitigate the consequences of devastating flood waves, researchers are developing an early warning system.

Catherine Abon knows the danger all too well. She comes from the north of the Philippines. Since the fall of 2011, she has been at the University of Potsdam. As a PhD student she is working to improve an early warning system for floods in her home country. A lecturer at her university, the University of the Philippines, encouraged her to look for a PhD program abroad and to bring her specialized knowledge back home, of course. Catherine, 30 years old, became aware of the graduate school Geo-Sim of the Helmholtz Association through an advertisement. Interdisciplinary scientists at the German Research Center for Geosciences in Potsdam, the Freie Universität Berlin, and the University of Potsdam have joined forces to provide training and conduct research in the field of Explorative Simulation in Earth Sciences.

Abon’s project also reflects this interdisciplinary idea. “I use mathematical tools to make geoscientific processes visible,” the young scientist says. At the beginning, she still struggled with the mathematics. Although she had taken some basic courses during her studies, she required a more comprehensive knowledge for concrete application. She is able to discuss her questions and problems in the ’flood group’, as she calls it, which consists of PhD students and postdocs. They all deal with floods in some way. Her PhD advisors also have an open ear for her. “It is ideal to be supervised by a geoscientist and a mathematician,” says Abon, referring to Professor Axel Bronstert from the Institute of Earth and Environmental Science at the University of Potsdam and Professor Ralf Kornhuber from the Department of Mathematics and Computer Science at the Freie Universität Berlin.

Catherine Abon came to Potsdam to examine if weather radar systems can be used for hydrological simulations. “The Philippines has new radar systems that register storms but they are not yet completely suitable for other application like flood warning,” Abon says. “I am trying to cover this field by using the software at the University of Potsdam.” She monitors the rainfall measured by radar in such a way that it can be used to make prognoses for flood waves. For this, she also uses “wradlib”, a program developed by earth and environmental scientists of the research group Hydrology and Climatology at the University of Potsdam. It is available online as an open source library. “At the chair of the University of Potsdam, the program has been mainly used for Germany. Now it is also working with data from the Philippine systems. Programs have to be made robust initially so they also work reliably for other cases. The software has already more than 40 users around the globe.”

Her findings during the process of her work make it so fascinating, Abon explains. On the one hand, there is the clear practical use of flood warning systems. On the other, she is gaining scientific knowledge from her work with the data that helps her to better understand hydrological processes. “To discover something new makes sitting here at my desk so exciting. The workaday life consists of sitting. The highlights are coffee breaks and lunch, but when I get the results I want, I could kiss the whole world.”

So far, prognoses about rainfall in the Philippines have only been possible through selective rain gauge measurements. Abon hopes to get more reliable and timely flood forecasts by evaluating radar information, because radar systems can measure the amount of precipitation more precisely.

The Filipina wants to prevent such disasters because the people in her country are severely affected by them again and again. When typhoon Haiyan devastated the country, she also suffered a kind of trauma in Germany. “Although my relatives were left unscathed by the typhoon, it was terrible for me to see the people of my home country suffer so much. And this because the storm was much stronger than expected.” In Germany, she attentively followed the relief actions, and it touched her how many people joined hands to help. She herself organized donation campaigns to help at least a bit from a distance.

A number of good early warning systems have since become available, Abon says. The “Philippine Institute of Volcanology and Seismology” is very active in exploring volcanoes and earthquakes. The “Effective Flood Control Operation System” in Metro Manila monitors rainfall and regulates the floodway. “Chaos still breaks out during such a catastrophe.” The omnipresent danger of natural disaster is still not yet present in people’s minds. “They do speak about typhoons and floods in primary school but too little about the damage they can cause.” Abon remembers the massive earthquake of 1990 after which all schools had to conduct disaster exercises several times a year but these were discontinued after a short time. “People tend to erase terrible events from their memory. We lack a culture of remembering.” Measures insufficiently implemented include regulation for earthquake engineering and designating flood-prone areas as uninhabitable. Abon nevertheless looks optimistically into the future. “Awareness of natural hazards has changed due to the many floods and typhoons over the past years. Relief organizations have also provided good awareness training. They go into the communities to inform people about potential hazards and the measures they as individuals can take to limit possible damages.”

Catherine Abon does not know whether she will directly return to her home country in the fall. She has no plans yet for the time after her dissertation. She is not worried about finding a job because scientists are sought after in the Philippines. “I somehow have the romantic idea that I will grow old in my home country, but now I am still young and want to travel the world.”

Catherine Abon is a PhD student at the Institute of Earth and Environmental Science at the University of Potsdam. As a member of the research group Hydrology & Climatology led by Prof. Axel Bronstert, she is working on developing a flood early warning system for the Philippines.