The King, the Countess & the Bishop – A New Perspective on the Enlightenment and Relations between Poland and Prussia 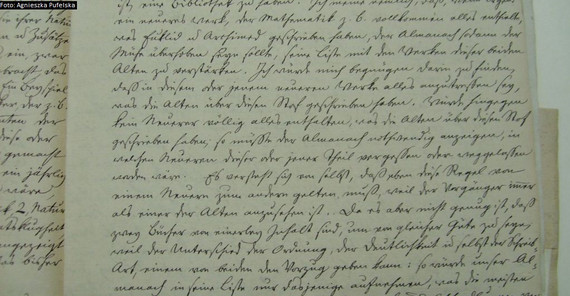 Power games, machinations, political alliances and betrayal – the period of European Enlightenment was eventful with many ups and downs. In a research project funded by the Deutsche Forschungsgemeinschaft (DFG) cultural scientist Agnieszka Pufelska examines this period’s hitherto rarely studied Eastern European perspective. With her work she also wants to spark a new way of dealing with historical sources and research methods.

She was smart, young, and beautiful – and a welcome guest at the court of Frederick the Great. Marianna Skórzewska was enthusiastic about the ideas of the Enlightenment and science. This combination has fascinated cultural scientist Agnieszka Pufelska. She came across the story of the Polish countess’s life in a 1930s article and began to dig deeper. “How did it happen that a Polish countess was often a guest at the court of Frederick II? That really interested me,” Pufelska says, who herself was born in Poland. Friendly relations between Poland and Prussia are hardly rooted in the prevailing historical perception. “World War II often taints our perception that the Poles and the Germans have never liked each other. I wanted to examine whether this has always been so and how Polish-Prussian relations worked in the 18th century,” Pufelska explains. She has also set off in search of the less investigated influences of Poland on the Enlightenment.

She traveled to the places where those documents that shed light on this eventful period of Polish and European history are stored. She spent weeks and months in court, state, and private archives in Berlin, Warsaw, Krakow, Vienna, and Poznan. She pored over thousands of files, letters, and notes and looked for evidence for the exchange between Poland and Prussia that has received little attention. She was mainly interested in the correspondence of noble families written mostly in French, because these documents clearly showed the writers’ relations to and opinions on the Prussian court. “It is tedious and dusty,” she admits with a smile. Sometimes it took her weeks to find a single paper in the archives relevant to her studies but it was worth it. The scientist found documents that shed new light on Prussian-Polish history and show that relations between these two are often presented in a negative and biased way.

She sees the reason for this in the methodology. “Interstate relations are often examined on the basis of political relations. I wanted to know whether there are relations apart from political ones. Was there any exchange on a cultural level? Because you cannot separate cultural and political activities.” Pufelska used the concept “cultural transfer” to analyze relations from a national perspective rather than a personal one. “At that time they did not think in terms of national categories. You moved in certain circles, keeping in mind the interests of certain noble families or the court“, the scientist clarifies.

Poland experienced a severe crisis at the end of the 18th century. “Poland was not an independently acting state at that time,” Pufelska emphasizes. It resembled a pawn being moved at will by the former major powers Russia and Prussia. After the Seven Years’ War, fought from 1756 to 1763 between European powers to gain hegemony, Fredrick the Great was concerned with strengthening relations with Russia. The issue of Poland became the guarantor for the Russo-Prussian alliance. Fredrick renounced his political and territorial claims, at least officially. Behind the scenes he maintained his relations with the enemies of Russian policy who wanted to dethrone the unbeloved King Stanisław August Poniatowski who had been instituted by Russia. “Those who opposed the king tried to get the support of Prussia. I was interested in this group,” Pufelska explains.

Marianna Skórzewska was among those critical of the Russian influence on her country and turned to Prussia for support. The countess was in her early 20s when she came to Berlin for medical treatment. There she was able to pursue her scientific and political ambitions. As an affluent patroness, she established contacts with the Berlin Academy of Sciences, the royal court and prominent members of the society. Since she had estates in the Polish-Prussian border region, she was also interested in good relations with the court for pragmatic reasons. “It is not easy to separate private interests from cultural or political ones,” Pufelska says. The official contact between Skórzewska and Fredrick the Great ended when the countess became pregnant in Berlin. She named her son Fryderyk. Marianna Skórzewska died from tuberculosis in 1773 in Berlin at the age of 32.

The Polish bishop Ignacy Krasicki is another protagonist of the Enlightenment in Poland. His name appears repeatedly in the documents that Pufelska examined during her research. Like Marianna Skórzewska, the bishop had close relations with the Prussian court. “It has been reported that Fredrick liked Krasicki very much, because he had a similar sense of humor,” Pufelska explains. The king and bishop discussed philosophy, literature, and religion. “Legend has it that probably the most important work of the Enlightenment in Poland, Monachomachia (War of the Monks), was inspired by conversations between the bishop and Frederick,“ Pufelska says. In this mock-heroic poem, Krasicki criticizes the dissolute life of Polish monks and clergy.

Marianna Skórzewska and Ignacy Krasicki represent the vivid exchange between Polish and Prussian intellectuals at the Prussian court. They also show that studying the Enlightenment as a Western European intellectual trend does not suffice. “What truly annoys me is the special emphasis always placed on France and Prussia and that everything else is considered unimportant. This idealizes the common image,” says Pufelska. Already in the 18th century Prussia was concerned about propagating a rather negative image of their neighbor to the east to justify its own political activity, she underlines. “It is sad that this remains true.”

“Prussia never treated Poland as an equal partner but rather as a Russian vassal state,“ Pufelska explains. With one exception: In 1791, after the death of Frederick the Great, Poland, supported by Prussia, created its own constitution. It went down in history as the “Constitution of May 3” because Poland was the first European state to create its own modern written constitution. “May 3 is still the Polish national holiday,” Pufelska points out. It is barely known today that the May Constitution probably would not have happened without the short but intensive alliance between Poland and Prussia, because the alliance broke up shortly afterwards. Prussia betrayed Poland to Russia, who invaded its neighboring state in 1792 and revoked the Constitution of May 3. In 1793, Poland lost significant territory to its neighboring states. By 1795, the Polish state no longer existed. Russia, Austria, and Prussia invaded the country simultaneously, dividing it amongst themselves.

Dr. Agnieszka Pufelska studied German language and literature, cultural sciences, and history in Płock, Frankfurt (Oder), and Tel Aviv. Since 2008 she has been researching the cultural relationship between Germany and Poland, the Enlightenment and Jewish cultural history at the University of Potsdam.