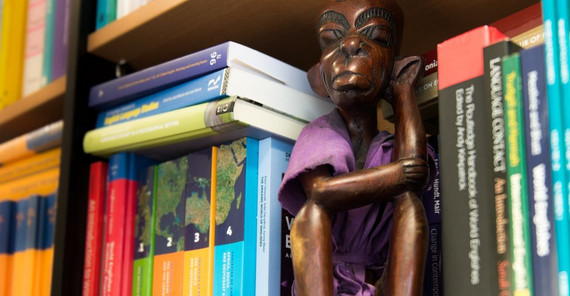 English is an international language; in most countries, you can get by with “world English”. However, in many regions of the world, English is no longer only an international lingua franca, but, as a second or third language, has become a part of the local culture. And almost everywhere, English is being spoken a little differently. More than 70 “World Englishes” – varieties of the English language – are known and documented worldwide. To understand them, you often need a special dictionary. It is one such dictionary – for West African English – that Professor Hans-Georg Wolf of the Institute of English and American Studies at the University of Potsdam is working on. What makes this dictionary special is that it covers six regional varieties – from The Gambia, Ghana, Cameroon, Liberia, Nigeria, and Sierra Leone, i.e., the whole of anglophone West Africa.

The time of the British Empire as the world’s most important colonial power may be over, but its legacy is certainly alive – not the least in the diversity of “World Englishes.” The Caribbean, Australia, South Africa, and New Zealand were only the first regions in which colonial civil servants and settlers injected the English language with new life through novel grammatical peculiarities, pronunciation, and – most importantly – words. From South Asia across the Pacific region over to Africa there are now varieties that differ so drastically from Standard English that you need special dictionaries to understand them.

Outbacker, outporter, grassfielder – three English words that have two things in common. None originated in Great Britain – the motherland – or the US – the second major shaper of the English language. To some extent, they are not even well known in these countries. On the other hand, each of these three words describes a person living in a very characteristic region, namely where the word itself resides: the Australian hinterland (outback), Canadian fishing ports located far from civilization (outport), and the vast grassy landscapes of western Cameroon (grassfield). These words could not have developed elsewhere simply because they would not have been needed anywhere else. Such examples show that the English language was adapted to regional needs and peculiarities around the world, differentiating itself into many local varieties. To linguists, these varieties are interesting for a number of reasons, as Professor Wolf explains: “The regional varieties of English illustrate many different processes of linguistic change. In most of these countries, English is extremely important, but it is by no means the only language. As a result, there is an active exchange between the often multiple mother tongues and the locally spoken English. This is a fascinating field of research.”

While Asian varieties of English, especially Indian English, have been studied for many decades, African Englishes have remained “in the shadow.” “Even though there had been some analyses and dictionaries of English in South and East Africa, African Englishes were still mostly new ground until fairly recently,” says Professor Wolf. ”For a long time, it was contested whether they were even legitimate varieties. Since then, however, they have been institutionalized, also in terms of language policy, and they now serve important functions. Sometimes they even constitute the neutral lingua franca, which different population groups are most willing to agree on, like in Nigeria.”

Wolf was part of one of the first comprehensive projects, launched in 1999 at Humboldt University zu Berlin, which examined six West African varieties of English comparatively. Since an initial internship at the Goethe-Institute in Cameroon in 1993 and while still working on his PhD, the topic has continued to fascinate him. The project supported by the Federal Office for Migration and Refugees (then called the Federal Office for the Recognition of Foreign Refugees) initially wanted to collect as much language material as possible, Wolf recalls. “In the beginning, we compiled everything and put it into a database: language samples on tape, first essays, books, newspapers, every type of written material we could lay our hands on. It was not always easy. We traveled several times to many of these countries to be able to access material on-site and interview speakers. Now the internet has become one of our most valuable resources.” The researchers also owe much of the material to local researchers, with whom they have built stable networks over the years. These researchers continue to provide material.

Although the collecting process will probably never end, the scholars can now begin combing through the language material for words and phrases that do not appear in the “common core” of the English language or only with a different meaning. The dictionary contains only those words that exist exclusively in West African English. The pickings differ greatly from country to country. All in all, the database currently holds more than 9,000 entries, including around 2,500 exclusive to Nigerian English, 1,300 exclusive to Cameroonian English, and about 900 exclusive to Ghana. Exclusive words from Liberia (about 500), Sierra Leone (about 350), and The Gambia (about 260) are even fewer. The remaining entries appear in several varieties of West African English. Some of the differences can be explained by the size of the countries and their populations and speakers: Nigeria’s over 150 million citizens speak 500 different languages, many of which have left their mark on the national variety of English. In The Gambia, with about 1.7 million citizens, “only” 20 languages exist. In countries like Sierra Leone and Liberia, civil wars have impeded the compilation of a suitable corpus.

When a word turns out not to be part of the “common core” and is therefore included in the dictionary, the analysis can begin: What does it mean? Where did it originate? From which language and which cultural context did it derive? Which unique cultural concepts and models does it mirror that apparently could not be conveyed with an existing English word? So far, most of the words are part of a few central culture-specific and country-specific domains. Many terms for local plants and animals as well as food made it into the local English language. Other expressions describe traditional social hierarchies or administrative systems or are part of a youth language. It is remarkable that although there are lexemes common to different varieties, e.g. shared between Cameroonian and Nigerian English, there are virtually no words that all varieties of West African English have in common, as Wolf notes. “Of the more than 9,000 entries, only six are documented for all countries: chief (traditional ruler, elected leader of a community), dash (bribe, small gift), brown envelope (bribe), petty trader (small-time street merchant), fufu (a cereal dish), and pepe (hot pepper).” To the linguist Wolf, the fact that two of these words describe corruption indicates not so much that these societies are more corrupt, but that they perceive corruption as an urgent problem and process this linguistically.

The dictionary is a mammoth project, carried out by a small team and – now mostly – its enthusiasm. The participating researchers are dispersed throughout the world. Thanks to modern technology, they are able to access and work on all databases simultaneously. “Right now we are writing the entries for all words – with specifications about the source languages, definitions, examples from actual usage, and explanations of the cultural concepts behind certain idioms,” Wolf explains.

The project has been going on for 15 years, but Wolf is certain it will not take another 15 years to complete it. He hopes the dictionary will be finished in three to five years. The search for a publisher has already begun. And Wolf knows how to go about this. He has just published a dictionary of Hong Kong English.

Professor Dr. Hans-Georg Wolf studied American Studies, German Studies, and Pedagogy at Johann Wolfgang Goethe University in Frankfurt am Main. He has been Chair Professor of the Development and Variation of the English Language at the University of Potsdam since 2008.