The Appeal of Difference 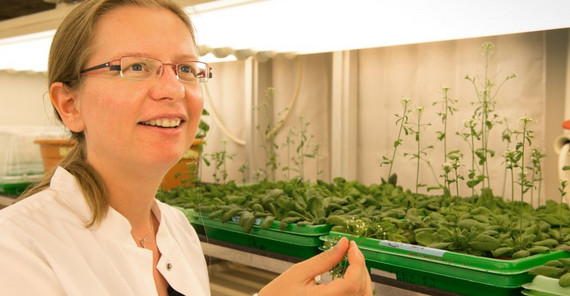 Who doesn’t dream of the jackpot yet waits in vain? But fortune favors the brave. Biologist Dr. Kerstin Kaufmann was one of 14 Sofja Kovalevskaja winners in 2012. She received 1.6 million Euros with this award, for which she has worked very hard. She has used the money to establish her own research group focusing on plant development at the University of Potsdam.

Even as a little girl Kerstin Kaufmann was interested in everything that blossomed, grew and crawled in her parents’ garden. In Mellin, a village of 200 people in Sachsen-Anhalt, she was in contact with nature at every turn. Biology lessons inspired Kaufmann, now 36, to pursue these interests. “Quite early it was not enough for me to only know the names of plants and animals.” She wanted to understand their differences, which was why she decided to study biology, initially in Braunschweig, and even back then she focused on plants. After her undergraduate studies, she continued her studies in Sweden, where she first researched so-called transcription factors, extremely important for plant development and evolution. “I have always been driven by scientific curiosity. This is why I went to Uppsala,” says Kaufmann. At this Swedish university with a long tradition she was able to establish contacts with experts in her discipline.

Whether in Sweden or in Jena or later in Cologne, she always focused on plant research, specifically evolutionary plant developmental biology and flower development. When she was working on her doctoral thesis she realized “that it is important to analyze model plants with regard to the function of transcription factors and their networks to understand evolution,” she says. Kaufmann moved yet again to pursue her research interests. The Dutch Wageningen University offered her a position with every possibility to continue her scientific approach. “There are many methods to study molecular interactions but few look into the plants’ tissue,” according to  Kaufmann. She has established and optimized methods of determining the DNA binding sites and interaction partners of transcription factors in plant development.

Evolution remains an area of interest to this day. She has led the research group Plant Developmental Biology at the Institute of Biochemistry and Biology since the end of 2012. Prof. Bernd Müller-Röber, with whom she has had research contact for a while, encouraged her to apply for the Sofja Kovalevskaja Award, and so she did. It became clear in April 2012 that she had won the prize and thus 1.6 million Euros. At this time she was still working as a group leader and assistant professor in the Netherlands. “After intensive deliberations I decided in favor of Potsdam and the prize,” Kaufmann says. Her husband, a Spanish bioinformatics specialist, works in Berlin, and both moved to Potsdam-Golm.

Six other scientists, PhD students/ and postdocs, as well as one undergraduate student comprise the research group. They come from the Netherlands, China, Italy, and Germany. The international composition of the team is no coincidence. Over the next five years the researchers can break new scientific ground and implement their ideas. They have ambitious aims. They want to understand how plant diversity is “encoded” in the genome and how this code is read and implemented. The researchers are investigating how developmental processes are controlled at the molecular level, from the DNA sequence to the mature flower. They examine model plants and compare plants. In a climate chamber the researchers grow the plants – the model plant Arabidopsis thaliana and closely related species – to compare developmental processes and examine genes significant to these processes. Not all genes are equally important in plant development. The research group is concentrating on key regulators and their target genes.

A day in the life of the young scientists is mainly a combination of laboratory experiments and data analyses. They work on the molecular level using molecular and biochemical methods in the laboratory to analyze gene functions. “It is important to conduct the experiments exactly to obtain relevant data,” says Kaufmann, because after the laboratory work, the data has to be evaluated on a computer. The researchers look for binding sites of transcription factors in the genome and want to know why, when, and how a gene is regulated and how significant that is for the development of the plant. The group works with genome-wide datasets, which requires bioinformatic expertise. The University of Potsdam, with its bioinformatics research group, provides optimal conditions for training and cooperation. The group’s collaboration with the Max Planck Institute of Molecular Plant Physiology in Golm provides many advantages, for instance with proteomic analyses. Kaufmann also hopes to establish and intensify the collaboration with her colleagues at the University.

Supervising PhD students is an interesting challenge for the awardee. “You need completely different skills for it than doing the experiments yourself,” says the young researcher. You have to coach and motivate your students individually and give them time and space for their own development. She wants to help them to understand that writing a dissertation is not child’s play and that almost everybody has nadirs to overcome in the process. In the final analysis, a doctorate means working as an independent scientist. You have to develop your own ideas and pursue them to the end, even if not everything goes smoothly. A well-organized schedule is necessary to balance all tasks as a group leader. Kaufmann’s new home also has a little garden where she can be close to nature, which she enjoys very much.

The Sofja Kovalevskaja Award of the Alexander von Humboldt Foundation is one of the most valuable awards in Germany with up to 1.65 million Euros. It allows the recipients from abroad to spend five years working on a research project at an institute of their choice in Germany and to establish their own research group. The award is granted for creative approaches to research. Scientists and scholars who have completed their doctorates within the last six years are eligible to apply. The award is named after the Russian mathematician, Sofja Kovalevskaja, who was born in 1850. She was appointed to a full professorship in mathematics at Stockholm University in 1889.

Dr. Kerstin Kaufmann studied biology in Braunschweig, Uppsala (Sweden), Jena, and Cologne. In 2012 she received the Sofja Kovalevskaja Award of the Alexander von Humboldt Foundation. Since December 2012 she has led the young academic group Plant Developmental Biology at the Institute for Biochemistry and Biology of the University of Potsdam.