Tales as Old as the Hills 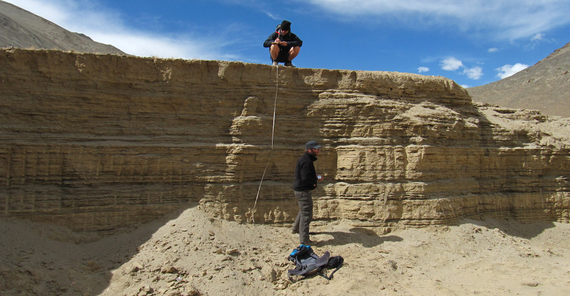 If earthquakes, landslides, floods and debris avalanches cannot be prevented, then people in the affected regions want to know at least how often such events might happen. Because these events are relatively rare but catastrophic, predicting them is one of the great challenges in geohazard research. The documentation of historical events is incomplete and based on just a few centuries. Using geological methods, scientists like Oliver Korup, Professor of Geohazards, can help to fill these gaps.

The number of scientists in the Brandenburg-Berlin region still impresses Professor Korup, which was the main reason he applied for a professorship in geosciences at the University of Potsdam. And he was successful. Since 2010 he has been teaching and researching here, since 2011 as a professor. After studying geography, geology and prehistoric archaeology in Würzburg and completing his PhD at the Victoria University of Wellington in New Zealand in 2003, he worked at the Swiss Federal Institute for Forest, Snow and Landscape Research. He has been following the geoscientific research in Potsdam for quite a while “that is marked by a great diversity of topics and is very visible internationally.” He appreciates his colleagues, who helped make his integration smooth.

Korup knew very early that he wanted to study natural sciences. His decision for geosciences was closely connected with the “classical appeal of working outside in all weathers” and the constantly necessary creativity. After having worked as a business consultant, research and science proved to be much more attractive to him, although the “quest” for external funding hardly differs from “fundraising” in private business. This competitive process for funding and resources, however, also means “that research scientists do not live the unworldly life some people assume or communicate” and that the perception of “research living in an ivory tower” is clearly being chipped away at. His business experience has, therefore, proven extremely useful in his research work. Korup also does not rule out the possibility of providing expert opinions in the future.

At the University of Potsdam, Korup deals mainly with earth surface processes, with extreme events like mass wasting, landslides and sediment transport in rivers or natural dams. Outside the lecture hall, the scientist is often in the field, for example, in Pokhara in the Nepalese Himalayas. This very popular tourist destination lies on wide-ranging depositions of mudflows. The history of their formation remains relatively unexplored. Various dating methods have indicated that these deposi-tions are geologically very young, about 450 – 1,500 years old. “Evidence on repeated catastrophic aggradation interlocked with other processes emphasize the need for a thorough accounting of Pokhara’s recent geological past. This would help us to assess the geological risks for the future much better,” Korup says.

Many high mountains in Asia are characterized by strong earthquake activity, varying precipitation and high erosion rates. “Therefore, the main focus of our research work is to trace the history of events in sediment layers by analyzing depositions or landscape forms.” This includes periods ranging from a few decades to several thousands of years. Geoscientists can look so far back because very rare, extremely destructive events leave their fingerprints on such geological archives. Examining soil layers and remains requires a high degree of precision. Findings in various scientific disciplines like geoarchaeology, physics, astronomy or mathematics are also necessary for an integrated understanding of events under and above the earth’s surface and for concrete hazard assessments.

Drilling is a particularly efficient way of determining history out of sediment but is not always possible. This is why Korup and his colleagues examine additional archives: the opened sequences of stratigraphic layers at a particular location, the sequence of aerial and satellite photos or historical documents. They measure, record, analyze and interpret them. The individual layers are assigned to specific events or processes depending on their size and frequency. If a layer clearly belongs to a flood event, the scientists are interested in specifying the flood’s date and extensiveness.

The comparison of historical aerial photos is the easiest research method, but tree ring dating and examining isotopes or cosmogenic nuclides also reveal the secrets of such natural events. “We know from such archives: The bigger, more voluminous and stronger these events, the more rarely they happen,” Korup says. The next step for the scientists is to establish models derived from their findings, for example, regarding the systematic relationship between size, power and frequency of the events. With their help and assuming the same environmental conditions, they can make predictions about the frequency of floods, mass wasting and earthquakes.

Given the rarity of such dramatic natural events, the people living today cannot ask their ancestors about them. “You have to look back into geological history and look for potential ‘silent witnesses’ and for clues,” Korup says. For example, in Japan they found warnings against settling in some areas affected by the 2011 tsunami were carved into stone. In Central Europe, historical, centuryold sources are found more often. Geoscientific archives are especially important in those regions with fewer written records. “It is difficult to influence the results we will obtain prior to our research work. Of course, when analyzing natural hazards it is particularly impressive when the people benefit from our findings,” the scientist explains.

Professor Oliver Korup studied geography, geology and prehistoric archaeology in Würzburg. Since 2011 he has been Professor of Geohazards at the University of Potsdam. His special research interests are attributing climate and global change to natural hazards, quantifying related uncertainties and reconstructing extreme events with evidence from geological archives.