The Institute of Local Government Studies 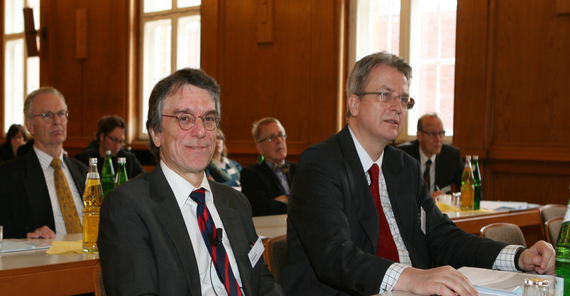 They decide where to build new bike paths and how many places to create in day-care centers for children. They also decide about the opening hours of the public swimming pool or the design of public green spaces. Local politicians in the 13,000 municipalities of Germany are responsible for a safe transport network in towns, communities and villages, for waste management and new residential buildings. Where and how to spend the scarce financial resources – for a new youth club or for a theater? These are also decisions taken by local, county, town, and local advisory councils. What are the structures of local policies and what is necessary to meet municipal responsibilities? How to set the course to meet future challenges? These are some of the questions analyzed by the Institute of Local Government Studies (Kommunalwissenschaftliches Institut – KWI) of the University of Potsdam.

For more than 20 years academics of law, political, social and administrational sciences at the KWI have been analyzing theoretical concepts and problems of local policies using an interdisciplinary approach. The political upheaval after the end of the Cold War also changed municipal political work fundamentally on the territory of the former GDR. Democracy found its way, existing structures and institutions of the newGerman Laender had to be rearranged and adjusted to democratic principles. “There was the wish to have an institution that would observe, evaluate and document this process scientifically,” Dr. Christiane Büchner, Managing Director, describes the founding history of the institute. “And this is where we needed academic expertise.” It was necessary to establish local self-government almost overnight based on the models of the old German Laender.

The KWI has retained this practical orientation until today. In addition to scientific research, for example on municipal cooperation, finances, local government reorganization or task sharing of communities and the private sector, the important pillars of the institute are further training and consultations. The KWI understands itself not exclusively as an institution of municipal law but of municipal research where legal, economic and administrational specialists do research and teach together, focussing their work on the new German Laender. “This makes us unique throughout Germany,” Hartmut Bauer emphasizes, who is the Managing Director of the Institute and Professor of European and German Constitutional Law, Social Law and Public Business Law. Students learn the basics of local administration and politics during their seminars at the KWI. They discuss causes and results of political reforms on the local level. They also evaluate experiences and concepts of individual federal states. The institute offers further training for practitioners in local politics – civil servants, district administrators, mayors as well as lawyers of public law. There are expert conferences twice a year. Scientists and politicians come together to exchange experience and the latest results of their research, and they also speak about strategies to resolve current problems.

But first and foremost, they provide advice for those who actively shape local politics. “There is such a high need for consultations and advice because local work in practice is highly marked by voluntary engagement,” Thorsten Ingo Schmidt explains, who is board member of the KWI and Professor of Public Law, in particular Constitutional, Administrative and Municipal Law. Community representatives, members of county councils, mayors of small communities – they all work on a voluntary basis, in many cases having a work life as well. “They all have to cope with requirements similar to those of executive managers in private enterprises,” Schmidt points out. Like an enterprise, communities have governance structures and have to deal with human resources, finances and organization. The demand for consultation services is correspondingly high.

Much-needed administrational reforms, demographic change or privatisation and remunicipalisation of public services are specific challenges for local governments, Bauer explains. A shrinking population leads to a decrease in municipal income. However, the responsibilities that the communities have to master remain the same. In these problem areas, communities, governmental departments and parliaments of the federal states draw on the expertise of the KWI. Being authorities on these subjects, the experts of KWI frequently give their opinions and write reports for the parliaments of Brandenburg and other federal states. Members of the KWI are also present in two enquete commissions of the Brandenburg parliament. They support members of parliament in reviewing complex issues.

Reports and opinions of the KWI are much appreciated at the political level – expert knowledge but also neutrality of the institute speak for themselves. “The opinions and statements of the KWI are not governed by certain interests or by a lobby as it may sometimes happen with other experts,” Thorsten Ingo Schmidt points out. Members of the KWI present their concepts as scientists and not as representatives of specific groups. They assess drafts of a law, analyze the impacts of political actions and do not work towards a certain result. “We do not express any political but academic points of view,” Büchner underlines. Nevertheless, the scientists have to stand their ground in the political debate. “You have to face up to the questions and answers of the committee members,” Büchner says. “This is similar to the situation of an examination,” Schmidt compares with a smile. They pass such exams with great success in most cases. The extremely positive feedback shows this very clearly. “You have given us the crucial impulse” – this is what committee members across parties repeatedly expressed to the scientists, Bauer says.