The Fascination of Moving Non-Centers 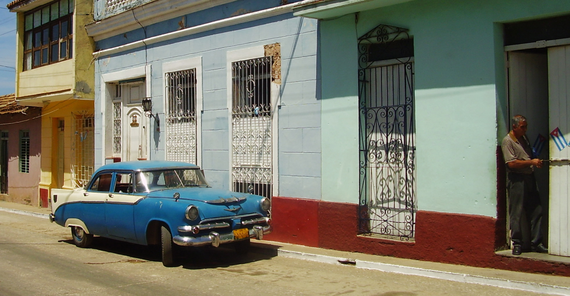 The Caribbean? Gorgeous. Who has not envisioned himself/herself lying in a hammock under palm trees at the ocean watching the sunset? Who has not thought about indulging in the legendary Caribbean rhythms in sweltering nights? Legendary, exotic, almost mythical. These are long standing, continuously repeated clichés. Gesine Müller, Professor of Romance Languages, heads a research group that deals with literature from and about the Caribbean in the 19th century, a phase when most Caribbean countries underwent sweeping change. Almost all won their independence from their European colonial powers yet remained closely connected with them – especially culturally. The different relationship of the Spaniards and French to their Caribbean colonies, however, is reflected not least in the literature from there.

Gesine Müller’s office is functionally furnished, almost spartan. The Caribbean happens here in the mind, as a journey – far away and into the depth of a long bygone era. However, it quickly becomes present. When Müller speaks about the “Kaleidoscope Caribbean”, about the radiance of the events that stirred the Caribbean in the 19th century, you can suddenly imagine it, and it becomes more than just a dream destination for globetrotters. “The colonial Caribbean of the 19th century is an extremely interesting period, but has hardly been examined scholarly until now,” she says. Several archipelagos and innumerable islands off the coast of the Americas make up the regions, where people of different cultural background have interacted for centuries. Unique to the Caribbean islands is their role as a former “melting pot”, as a venue of “early processes of cultural globalization”, according to Müller. A region where five European colonial powers operated, whose colonies gained independence at different points in time, where immigrants, slaves, expatriates and adventurers came together, “anticipated the phenomena and processes that we consciously perceive today.”

Müller has been tracing the literature of the Caribbean for a number of years. Her current research project on the “Transcolonial Caribbean”, an Emmy Noether Young Research Group, with the Chair Romance Literature of Professor Ottmar Ette at the University of Potsdam, began back in 2004. While working on her dissertation on Latin American contemporary literature, she came across traces of colonial literature of the Caribbean region again and again. “Then I decided to develop a project that comparatively analyzes the cultural detachment of various countries from their European colonial powers.” When there was the opportunity to apply for a research group within the scope of the Emmy Noether Programme for her project, she did not hesitate. In 2008 her application was approved as the first young research group in Romance literary studies. The heads of newly founded Emmy Noether young research groups can establish their projects at a chair of their choice. Müller decided in favor of Potsdam, where the expert in Romance literature, Ottmar Ette, has been working on the Caribbean and transfer research for quite some time. It not only took a while to form the group but rounding up the object of their investigation – Caribbean literature of the 19th century – was also quite an adventure. Müller visited archives and libraries across the archipelagos to compile a corpus of the most important Caribbean texts that would later form a central reference point for all partial projects. It was worth it though because these texts offer insight into the exceptionally versatile cultural history of the region.

An expert in Romance languages and literature, Müller is very interested in the comparison between the former Spanish and French colonies in the Caribbean. A mere look into the historical development already suggests differences. While all Spanish colonies gained independence in the 19th century, all the French – with the exception of Haiti, independent since its early revolution in 1804 – remained under the influence of the colonial power, which remains essentially true today. The reason for this, Müller says, is the strategy of France in dealing with the unique characteristics of the indigenous peoples. “The pronounced radiance and cohesive power of France speaks to its capacity to integrate the colonial Other and to undergo transformations itself as it is faced with that Other.”

This meant that the francophone Caribbean literature was always oriented towards Paris. Its authors imitated the writing of French classical authors without being a real copy. Müller calls this a “literary staging of the binary opposition between metropolis and colony”. The Caribbean intellectuals not only closely bound their homeland to the remote colonial power, but also even sometimes advocated for the preservation of slavery, apparently in good faith that this would be to the advantage of the slaves. The orientation of the Caribbean writers on the remote center of the francophone realm was also promoted by the French publishing industry that was completely dominated by Paris. If an author wanted to be read, he or she had to find a publisher in the capital. This was an economically motivated dependence that has partially continued until today.

Spain, unlike France, was not able to offer its colonies such a “culturally integrating center,” Müller says. In addition to the earlier and more vehement independence efforts, it also liberated literature in some way. As a consequence, writers were looking elsewhere for new points of reference and new networks. They often found them on the American mainland but also identified shared history as a connecting element within the Caribbean and with Europe. Many Spanish-speaking authors were therefore committed to a principle of “multirelationality”, Müller explains. Already in 1870, Puerto Rican Eugenio María de Hostos considered the Antilles “the connection, the fusion of various ideas from Europe and the Americas”.

The Spanish-speaking Caribbean is also the subject of the work of Johanna Abel, one of the three young academics writing her PhD thesis in the Emmy Noether Young Research Group. In fact, she has analyzed the texts of 25 western women who wrote about their travels to the Caribbean to explain which literary expression they found for their intensely physical impression of this world somehow completely new to them. “The Caribbean was an intersection of movements of all kinds, of the military, slave trade and migration. Many cultures came together here which learnt to live together. This made it a unique ‘rhythmic space,” Abel says, “that had an irritating, overwhelming effect due to the contemporaneousness of the uncontemporary, i.e. things that actually exclude each other. Newcomers had problems dealing with this abundance of sounds, presence and contact. This was also expressed in many texts of travellers.”

Due to better transportation, more and more women came to the Caribbean in the 19th century. They often traveled in the company of men but occasionally did so alone, like Mathilde Houston, a former court lady of the English Queen. Her letters to friends living in the British homeland were published later. Abel’s analysis shows that these writing women did not only travel on the tracks of men. “They were colonial agents like the men and oriented themselves by the male canon of writing about the Caribbean, a romanticized and exoticized style. At the same time it became clear that they often developed their own views that mainly expanded into their writing through “body knowledge”. They reflected how they perceived fashion, nakedness and masking but also how they as women and foreigners were themselves perceived. They were quite versatile in writing about their experiences: sometimes utopian and idolizing, sometimes defensive and other times culturally critical, even of European culture.”

Towards the end of the 19th century the first precursors of tourism were developing, mainly from the USA. Group tours by train were “in”, as well as island hopping. Writing became more factual, often more journalistic. Some texts even took on the role of early travel guides. “This has shown me how up-to-date the colonial Caribbean is,” Abel says. “On the other hand, the exotic colonial image of the Caribbean has been kept alive there and has repercussions on the western world.”

The relation between colony and colonial power was not a one-way street in the French-speaking Caribbean of the 19th century either. France used information gathered in the colonies about foreign lands to expand its own knowledge. The ethnology that emerged in France at the turn of the 19th century had been considerably developed by findings gathered in the French colonies. Something else found its way from the margins of the world to Europe: the transfigured picture of the exotic Caribbean. Many 19th-century authors made the colonies vanishing points of their writing, creating a vision of an ideal, utopian Caribbean in their texts. Many years would pass before there was a debate about the reality in the French colonial empire, Müller explains. “Only in the last 20 years has its own colonial history become an important issue. Meanwhile, the 10th May is the commemoration day of slavery and colonialism, although neither topic has been in the public discussion for long.”

Regarding colonial literature of the Caribbean as a whole, Gesine Müller says that its close connection to “the discourses about the colonial Other” make it particularly interesting in the period of current globalisation. While confronted with the phenomena of mass migration, circulation and networking, it can “sensitize as an early messenger for the category of the inbetween, communicable only through the potential of literature”. This is why Müller and the young researchers in her group have looked for links to current discourses and questions. Over the past years, two large conferences – on the “Kaleidoscope Caribbean” and the important cultural, literary phenomenon of the island “worldwide” – and many collaborative activities have been good opportunities to integrate the work on the literary colonial Caribbean with research on contemporary Caribbean literature. These connections go in both directions, Müller underlines, because she sees the Caribbean of the 19th century as a collection of hubs that were much more productive than we are ready to believe today. “In a global context, a lot more happened in these non-centers than previously thought,” she says. “Cultural exchange processes were more important than we have expected so far – also for Europe.”

PD Dr. Gesine Müller, studied Romance philology, theology and German language and literature in Freiburg, Bogotá, and Münster. Since 2008 she has been head of the DFG Emmy Noether Junior Research Group at the Department of Roman Studies at the University of Potsdam.

Johanna Abel studied Spanish philology and religious studies in Berlin. Since 2008 she has been a research associate of the Emmy Noether Junior Research Group “Transcolonial Caribbean”.

Emmy Noether Junior Research Group “Processes of Cultural Transfer in 19th-Century Literature: The Caribbean within the Context of the Cultural Radiance of Europe, Exemplified by France and Spain (1789 – 1886)”