German-Jewish Culture around the World 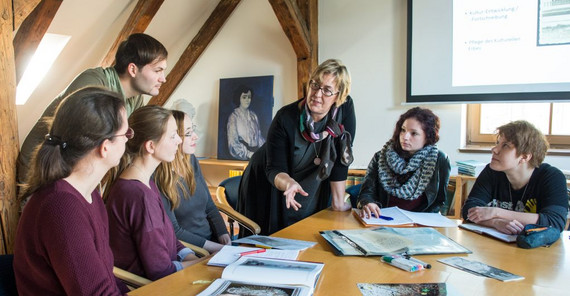 A chipped cup with a faded golden rim. An old teddy bear, a yellowed, shabby tablecloth. A poem, a letter, a historical Goethe edition – all these items accompany Elke-Vera Kotowski in her academic work. The Potsdam historian has also traced these things over thousands of kilometers and across countries and continents. Kotowski completed her doctorate at the University of Potsdam in 2000 and has focused on European-Jewish culture and cultural history since then. After her dissertation she found her academic home at the Moses Mendelssohn Center, where she has dedicated herself to an almost detective-like search for evidence.

She persistently traces the stories of German-Jewish emigrants who found a new home in America, Asia, Africa, Oceania and Europe. The project “German-Jewish Cultural Heritage” started about two years ago and could be summarized as a triad of discovery, collection and conveyance. Since 2011 researchers and students have been tracing the lives of German-Jewish emigrants in this research project funded by the Federal Commissioner for Culture and Media. Foreign ministry officials have supported the Potsdam researchers by asking their colleagues in 60 embassies for help. Of particular interest were countries with a long immigration history and those through which or to which Jewish people sought exile.

The feedback was varied. In Argentina, for instance, they were very successful. Particularly in Buenos Aires it was immediately apparent that people of various ages and backgrounds intensively engage in this issue. Embassy employees have been involved in many German-Jewish projects. It went almost without saying that the opening event for the German-Jewish Cultural Heritage Program took place in the Argentinian capital in March 2012. Kotowski remembers this event very well, even more than a year later: “This was a very special atmosphere. Nobody of us knew how they would receive us. We speculated a lot about how many people would be interested in our project and how they would feel meeting us. Actually we all agreed that 20 or perhaps 30 visitors to the German embassy that evening would be a great success. As a matter of fact, almost 100 guests accepted the invitation to the researchers’ information meeting. “In the course of the evening an elderly man stood up and explained in Spanish that he once had promised himself to never again set foot on German soil. He had broken his promise because he had accepted the invitation to the German embassy. He had also promised never to speak German again and then changed to his mother tongue with tears in his eyes. This was very moving indeed.” There were many special moments like this. The reaction to the intentions of the Potsdam researchers was immense, almost overwhelming.

Important historical artifacts of Jewish culture all over the world are at risk of being irrevocably lost. In Buenos Aires, for example, a Jewish aid organization ensured that the immigrants in the 1930s had a roof over their heads and a warm meal. The archives of this organization have filing boxes filled with refugees’ names, addresses, ages and places of origin, a real treasure for any historian. When the organization moved into a new, smaller office the question was what to do with the filing boxes. Should they be thrown away? “When we were asked whether it is worth keeping theses boxes, we advocated for their safe storage. This is authentic history reflecting stories we have to preserve,” says the project leader. More and more German-Jewish emigrants and sometimes their descendants willingly told the Potsdam researchers their life stories. “On my travels I repeatedly had the impression that we had come at exactly the right time with our questions and search.” Kotowski is stitching these life stories into a historical “patchwork blanket” that describes an under-researched aspect of German-Jewish history that has got little attention. It describes the very personal consequences of world history on the emigrants’ lives, their partners, children and ultimately subsequent generations. Especially third or fourth generation relatives often search for their own identity, according to the historian. Where are my roots? What culture shaped me? Which traditions has my family maintained?

The researchers are trying to find out to what extent German-Jewish emigrants stuck to Jewish culture in their new home country. This also determined whether they contributed their values and experience to the culture of their new homes. A transatlantic correspondence between members of the German-Jewish Guttmann family in Austria and their emigrated son/ brother was very illuminating for Kotowski in this respect. A box containing these letters – a weekly exchange of news between 1926 and 1956 – was given to an American colleague a few years ago after being discovered in an attic. They were then analyzed together with students in a seminar at the University of Potsdam. It excites and interests the historians to find out if and how historical events are reflected in this family’s correspondence. What were European Jews thinking during these years? What bothered or concerned them? Did the anti-Jewish riots in Germany in 1933 play a role? What about the annexation of Austria in 1938? Every Saturday a letter crossed the Atlantic. The analysis of the man who immigrated to New York is very clear-sighted. While the mother and brother repressed the everyday realities – persecution and discrimination – the emigrated son/brother warns them of upcoming developments. The Viennese relatives eventually fled to the United States, too. The historical letters provide information on how quickly the immigrants integrated into the American multicultural society. After a short time they were exchanging news (in writing) in English. The correspondence between relatives in the old and new worlds contains lines like, “We have become almost real Americans.” Integration did not happen so quickly and uncomplicatedly in many other countries of exile. This might be the reason why memories of the lost homeland and relatedness were preserved so much more.

It remains fascinating for historians how the cultures mutually influenced each other and to see how different cultural traditions can meld into a new common identity. Kotowski explains, “We have repeatedly discussed what the term ‘cultural assets’ means. Is a poem an object of cultural value? Yes. A cuckoo clock, a trading picture and a small volume of Rilke poems as well.” The Potsdam researchers concentrate not only on emigrants who had to leave Germany after the Nazis came to power but also on those who emigrated in the 19th century. When comparing these two groups, it is interesting to analyze whether a visible difference existed in sticking to their original identity between the early emigrants and those expelled by the Nazis.

A database will form the basis for long-term collaboration and exchange on an international level, which will, according to the Potsdam historians, make the collected items universally accessible one day. Only by doing this can it be used for various research contexts – some not yet even anticipated – that deal with the theoretical foundations of the causal and effective history of German cultural history and the influence of Jewish artists. The aim is to bring together institutions, associations, communities, research centers and museums worldwide. All those dealing with the preservation of German-Jewish cultural heritage will be systematically connected and invited to a long-term cooperation. Kotowski sees this as an investment in the future, “I think that it is an effective prophylaxis against the impeding cultural oblivion, which would ultimately mean the loss of identity. We are interested in new forms of preservation and in how modern communication technology can help us save sources. The Internet and modern databases can be very useful for this. Of course, this is expensive, but if we are unsuccessful, the Holocaust will be only a historical footnote in 50, 100 or 500 years.”

The project “German Jewish Heritage” is not a retrospective one-way road. In addition to seeking traces and looking into the past, it has to do with a critical approach and questions regarding the existence of a living German-Jewish culture in the Federal Republic of Germany. It is about the question if an almost extinct culture and lifestyle will be newly established and a self-awareness is developing based on the emigrants’ stories. Not only Jewish communities are confronted with these questions. The German majority society is also obliged to answer these questions and to deal with the influences and effects of German-Jewish history and development as an integrated component of the overall history of Germany.

The project “German Jewish Heritage” is devoted to recognizing, registering and preserving German-Jewish cultural heritage. It focuses on seeking traces of the paths of German Jews as a consequence of emigration. The term ‘cultural heritage’ includes material and intellectual heritage that German-speaking Jews brought along into their new home countries both for the 19th century and the profound caesura in 1933. An Internet platform and a database currently being developed are to support the cooperation of all relevant institutions and ensure a transnational exchange. The project should encourage public access to as many assets of German-Jewish culture as possible. This will allow universal access to the historically valuable primary sources. The researchers’ aim is to ensure long-term access to these sources for future generations as well as to use the acquired knowledge sustainably.