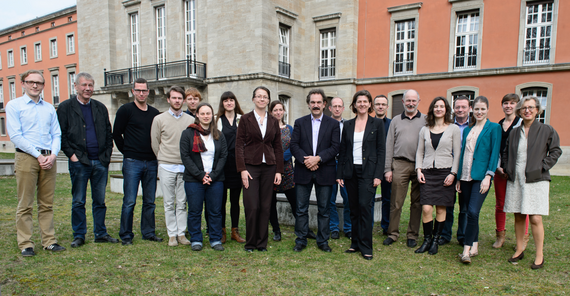 Science rarely seems to be simple because it tries to explore the unexplored and to understand what has not been understood so far. The questions and problems it deals with are often complicated, tricky or complex. Or they are even “wicked”. The Research Training Group that was started at the Faculty of Economics and Social Sciences of the University of Potsdam in October 2012, as its name suggests, has taken up the cause of such “wicked problems”.

There are problems that are as simple as the solutions to overcome them: “If you want to make sure that only those can enter a car park who are allowed to do so, you just put a barrier in front of it,” Professor Klaus H. Goetz says. The Professor of Politics and Governance in Germany and Europe was the first spokesperson of the new DFG-funded research training group “Wicked Problems, Contested Administrations” in Potsdam. In October 2012 young researchers started to examine how modern public administration responds to pressing political problems that cannot be easily solved. “Wicked problems,” a term that has been used in English-speaking management sciences for quite a while, have a particular quality compared to others,” Goetz explains. There are actually three distinct features. First, wicked problems are complex and often involve several levels. Administrational institutions from local to international levels and of different sizes may be affected by the same problem. Perhaps they have to implement an international protocol on climate change, for instance. Secondly, wicked problems are bound up with a lot of uncertainty regarding the means that are used and the purpose they should achieve. It is often very unclear whether the aims of an action can be implemented with the envisaged measures at all. While a car park barrier keeps out unwanted cars, it is not clear whether the reduction of CO2 emissions will delay climate change. And thirdly, wicked problems are ambiguous. The involved parties often do not agree what the actual problem is. Even experts do not reach a consensus when formulating the problem because of insufficient or contradictory information. When natural scientists have to “translate” findings into political or administrative actions, for instance regarding environmental questions, we can observe ambiguity.

The young scientists of the training group do not primarily deal with the wicked problems in their doctoral theses. “We do not investigate the problems as such, but rather how administrative bodies handle them,” Bertolt Wenzel, one of the eight PhD candidates, says. He wants to find out in his project what are the means used by political actors in Europe to stop or reduce marine pollution. The interesting aspect is that European institutions like the European Commission and regional bodies have to work together for this aim. “I want to analyse whether this form of cooperation will lead to a juxtaposition of institutions disturbing each other or to a more effective solution to the problems,” Wenzel says. The PhD candidates focus on investigating how public administration at all levels tries to meet the varied challenges they are confronted with. In their individual projects they also examine questions like: From where does an administration department get the information that is the basis of its decision-making? How does it handle it? What does it decide and how does it act afterwards? The aim is to get a comprehensive insight into how administrative units collect and coordinate knowledge and prepare it for political decision-makers to have it available when it is needed. Goetz says, “Just a few experts were interested in swine flu and what you can do against it before it spread. Administrative bodies have to hold available an inventory of knowledge so that it can be used at the right time to take political decisions on a broad basis.” The heoretical and methodological approaches of the individual research projects are different. After all, the research training group is an interdisciplinary team. Twelve professors of the Faculty of Economics and Social Sciences are involved, i.e. scientists in public management and governance, but also sociologists and business economists. They all have a common interest in “wicked problems” and the strategies used by public administration to handle them. Correspondingly, the topics of the eight individual projects are manifold. How does tax administration of international financial flows work in the 21st century? How does the administration of secret services work after the end of the Cold War? Four PhD candidates are working on the attempts being made by administrative bodies ranging from the municipal to the international level to translate climate protection into administrative activities.

Proceeding from the specific nature of these problems, the obvious thing is to include a wide range of them. “Many wicked problems are unique in their specific form,” Goetz says, “as are the approaches of administration to solve them. We want to reflect some of the experimental processes with our thematic variety of projects. We want to show how administrative solutions are tested and how they are rejected.” A young scientist is examining, for instance, what is the potential significance of Design Thinking for public administration. However, it is not the primary goal of the research training group to prepare a manual of wicked problems: “A manual ‘Ten ways how to deal with wicked problems’ will not evolve from the project,” Klaus H. Goetz says. “But we hope to show trends and patterns when confronted with wicked problems and also solution strategies that are more appropriate than others.”

Like the problems they are dealing with, the PhD candidates should cross borders and network internationally. The official language of the research training group is English. Part of the financial means is scheduled for inviting international visiting professors on a regular basis. Meetings, conferences, and an annual international workshop for PhD candidates with their partners in the Norwegian town of Bergen and in Stockholm will ensure that the research work of the young scientists and also the relevant projects of the participating professors complement and enhance each other.

However, the vision of the pioneers in this research training group goes further. According to Goetz, the DFG-funded project can form the basis of a structured training of doctoral students at the entire faculty later on. As many doctoral students as possible should benefit from the proposals that are developed by the scientists of the research training group. These proposals range from tailor-made qualification programmes via the equal opportunities programme, which is considered a model university-wide, to international cooperation. “In this way, a contour-forming research programme will initiate, at the same time, sustainable promotion of young researchers,” Klaus H. Goetz underlines. And this is not a problem, but a solution.

“Wicked Problems” stand out through a high degree of complexity, uncertainty, and ambiguity. This is why they are a fundamental challenge for institutions of public administration – at local, national, and international level. The term “wicked problems” has been used in English-speaking social sciences since the 1960s. For the Research Training Group “Wicked Problems, Contested Administrations: Knowledge, Coordination, Strategy” it has been translated into German.