Traces in the Sand

Geologists from Potsdam measure the shorelines of Lake Issyk Kul 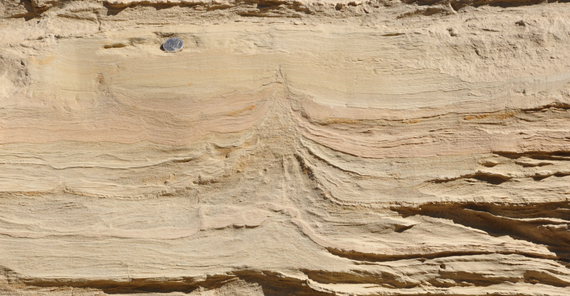 Volcano eruptions, earthquakes, floods, landslides – these forces of nature form new patterns of our landscape again and again. Today we can still find traces of events long gone although they might be hidden by many layers of sediment. With enthusiasm and flair, geologists from Potsdam explore the reasons for significant changes in the water level of Lake Issyk Kul in Kyrgyzstan.

The computer monitor shows a barren, treeless landscape. The sandy ground is covered by dried grass. There are also a few big pieces of rock scattered on the ground. Somewhere in the background you can see the snow-covered peaks of the Tien Shan Mountains. There are small sand slopes near a huge fresh-water lake that an untrained eye can hardly recognize. Other places are marked by cliffs that are several metres high and form steps in the landscape. The geologist Angela Landgraf took photos of this prominent landscape during a sixweek expedition last autumn. For her, these slope breaks are witness of a time long gone because they are shorelines marking the areas where the banks of the lake were in the past. The scientist from Potsdam was looking for evidence of the geological past of Lake Issyk Kul on her expedition to the north of Kyrgyzstan. Being the second largest mountain lake in the world, Lake Issyk Kul reaches 670 metres in depth.

“We know that about 25,000 years ago and again about 500 years ago the water level of Issyk Kul was much higher than today,” Angela Landgraf explains. The scientist wants to investigate the reasons for this. On one hand, climatic changes can lead to water-level fluctuations in big lakes. On the other hand, they can be the result of tectonic events, like repeated earthquakes. Climatologists intend to use the lake as a climate archive in the near future and to obtain drilling cores from lake sediment. The sediment layers of the lake provide valuable information about the former climate conditions in the region. However, earthquakes can significantly influence the composition of sediments and the water level of a lake. This may happen when complete hillsides or rock masses slide into the water and block the outlet of a lake. To gain reliable information about the climate of the past millennia, scientists have to be able to distinguish between tectonic and climatic causes for sedimentation pulses. The investigations of Angela Landgraf should provide clarity.

Many geological events took place in the area around Issyk Kul that presumably influenced the lake. “The area is seismically very active,” Angela Landgraf explains. About 100 years ago the region was hit by a series of strong earthquakes. Historical documents prove that there were also severe earthquakes before. Such earthquakes may have left traces in the former shorelines, which the scientist reconstructed with the help of satellite pictures before her expedition. These shorelines are unique reference horizons for geoscientists, which they use to decipher the uplift and subsidence of the surface. Indicators for earthquakes also exist in the outcrops that reveal lake sediments that are thousands of years old. In some places, the fine layers in the sand and the light and dark layers of clay, silt, and gravel are deformed, folded or bent. Using scraper and brush the scientists uncover and analyse such structures, also called seismites. “If such soft sediment deformation repeatedly occurs within a larger area, it is an indicator for an earthquake,” Angela Landgraf says. It is not easy to identify these places: “We spent a lot of time travelling through the countryside in a Russian minibus,” she admits.

It is also quite difficult to find the former shorelines in this rough terrain. The geologist measures with a differential GPS unit to gather high-resolution data. “On the aerial photographs you can identify the shorelines much better than in the field,” she comments. The relief erodes quickly in the soft sediments. However, slope breaks, lagoons, bays, and cliffs provide evidence for the former location of the shoreline.

Geoscientists assume that a geological event was responsible for an approximately 50 metres higher lake level of Issyk Kul about 25,000 years ago. Angela Landgraf looked for indicators in the Boam Gorge at the western end of the lake. A landslide might have closed the narrow gorge and created a natural dam. There is nothing left of it today, but in the plain behind the gorge there are huge boulders. They might be remnants of a natural dam, outburst by the dammed-up water mass. Then a disastrous flood would have devastated the area.

Angela Landgraf analyses size and age of these boulders to determine whether they really have their origin in the gorge. Using a mathematical model, she can calculate which transport capacity the water needs to move the boulders. Thus she can draw conclusions regarding the flood event that was possibly triggered by the breaking of the natural dam. The amount of nuclides built by the interaction with secondary cosmogenic radiation on the surface of the rock shows her when these boulders were deposited. If this time matches with the occurrence of the lake’s highstand, a landslide dam is probably the reason for the accumulation of lake water.

More than 250 kilogrammes of rock samples wait for Angela Landgraf after her return from Kyrgyzstan. They all have to be analysed in the laboratory. Despite the exertion she has enjoyed the expedition to Lake Issyk Kul. “It is really an amazing landscape – the crystal-clear blue lake, the snow-covered mountains,” these are places as they were described in the books of Chingiz Aitmatov. And she says, “You can really look forward to every new working day”. And of course, you should also have a certain thirst for adventure.

The “International Continental Scientific Drilling Program” (ICDP) gives multidisciplinary teams of scientists from all over the world the chance to work on drilling cores and to answer global questions. The programme intends to provide exact, fundamental and globally significant knowledge about composition, structure, and dynamic processes in the Earth's crust using unique means of scientific deep drilling. The programme deals with various questions: development of the climate, volcanic activities, geothermal energy, large fault zones or origin of earthquakes. Deep drilling is complex and expensive. Such projects are only possible by international cooperation and co-financing. In addition to the international programme, there is a scientific structural programme of the DFG (German Research Foundation) in Germany. Coordinator of this programme is Professor Roland Oberhänsli from the University of Potsdam. When scientists prepare for deep drilling they have to do preliminary explorations. This will make sure that drilling is done at the right place. After the drilling, core samples have to be scientifically analysed. For this the scientists can use the national programme.

The University of Potsdam is participating in the ICDP with several projects. In addition to Lake Issyk Kul, which is regarded as a promising climate archive due to its age, geologists also explore reefs in Japan, the migration of hominids from Africa, the development of magma in the caldera of Pozzuoli or plate movements in New Zealand. With her work, Angela Landgraf prepares and supports the planned future deep drilling project at Lake Issyk Kul.

Dr. Angela Landgraf studied geology at the University of Potsdam. After finishing her doctorate, she is now working as a Postdoc at the Institute for Earth and Environmental Science.