From a bird's eye view – monitoring vegetation resilience from space 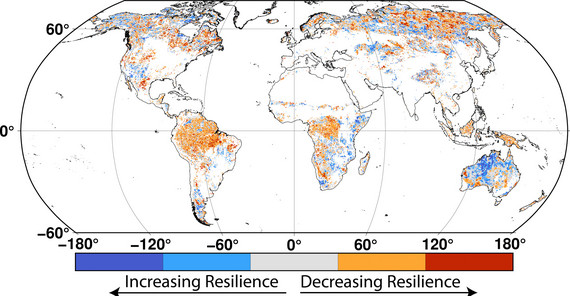 Image : Taylor Smith
Global trends in vegetation resilience since the 2000s. Many regions – particularly tropical rainforests and Siberian tundra – are less able to maintain their current state in the face of changing environmental conditions.

In an empirical study published today in “Nature Climate Change”, Dr. Taylor Smith from the University of Potsdam and his colleagues at the Potsdam Institute for Climate Impact Research (PIK) and Technical University of Munich (TUM) show that the ability of an ecosystem to withstand and recover from damage can be measured from space. The applied method based on satellite data may prove important during upcoming decades of climate and land-use change.

Climate change affects the character and health of ecosystems worldwide. In theory, ecosystem resilience, which is the ability of ecosystems to resist and recover from external shocks such as droughts and fires, can be inferred from an ecosystem’s natural variability. With their monitoring method applied to satellite images from 1992 to 2017, the authors confirmed for the first time that this is possible across vegetation types and climate zones.

”New ways of handling large data sets make it possible to check on widely-held theories and assumptions about how ecosystems function”, says lead author Taylor Smith. ”Our work empirically confirms one of those theories – which makes it possible to measure how resilient vegetation is to outside pressure with a straightforward mathematical model.” Co-author Niklas Boers (TUM/PIK) adds “Our method allows us to continuously measure changes in vegetation resilience at any place on the Earth’s surface. We thereby provide a solid, empirically confirmed framework for monitoring vegetation resilience from space.”

The work further reveals that in many regions, global vegetation has lost resilience since the early 2000s, meaning vegetation takes longer to regain its natural equlibrium after disturbances. ”We find very different long-term trends in resilience – depending on climate zone and vegetation type – but overall, declines in vegetation resilience have become more common during the last two decades,” says Taylor Smith. Especially tropical rainforests and Siberian Boreal forests have grown more vulnerable to events like wildfires, pests, and natural catastrophes. Possible factors that might contribute to this shift include natural long-term variability, anthropogenic climate change, increasing human land use and deforestation, and a higher frequency of droughts and wildfires.

”We urgently need to intensify our efforts to detect potential changes in vegetation resilience and to understand the underlying drivers. We expect anthropogenic global heating as well as land-use change to play an important role, but many processes aren’t well understood, making it difficult to predict the fate of natural vegetation systems in the coming decades,” says Niklas Boers. ”Satellite data can play a crucial role here in continuously monitoring the health of vegetation and other ecosystems,” Taylor Smith summarizes.

Image: Global trends in vegetation resilience since the 2000s. Many regions – particularly tropical rainforests and Siberian tundra – are less able to maintain their current state in the face of changing environmental conditions. Image Credit: Taylor Smith.