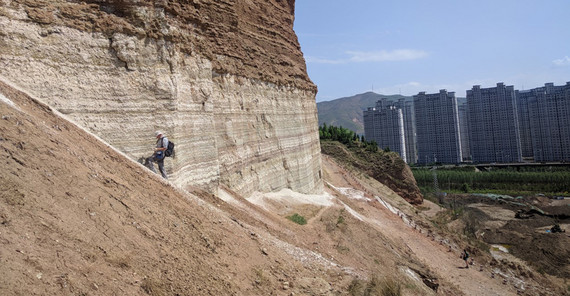 In a high-CO2 world, changes in the Earth's orbit particularly impact climate and vegetation and could explain the famous "Grande Coupure" that completely redefined the fauna and flora of Europe and Asia 34 million years ago.

Climate conditions 50 to 34 million years ago tell us about our future. Researchers have to probe this far back in time to find CO2 levels similar to what is predicted at the end of our century. A team of international researchers with participation of Potsdam University compared climate models to fossil remains of plants to find that short astronomical cycles, although usually not considered, have had a strong effect. These so called Milankovitch-cycles have radically changed the geographic distributions of climates and biomes. This can explain major changes such as the famous “Grande Coupure” that completely redefined Europe and Asian fauna and flora. This sends a strong message how fragile biomes may easily tip over when pushed towards threshold conditions.
About 34 million years ago, the Earth shifted from the warm climate to a much colder climate, allowing the establishment of a perennial polar ice cap in Antarctica. Recent studies show that this global climate transition was however punctuated by local and rapid climate oscillations, of the order of a few tens of thousands of years, linked to periodic changes in the Earth's orbit. These orbital variations, due to the interaction of the Earth with the other planets of the solar system, modify the distribution of the insolation received at the surface of the globe. This has repercussions on atmospheric and oceanic circulations, and therefore on the climate.
In a study published on October 22, 2021 in the journal Science Advances, and led by scientists from the Universities of Paris, Potsdam, Stockholm, Amsterdam and Rennes, they sought to assess the extent to which the lack of consideration of orbital variations by models and botanical compilations biases the representation of the paleoclimates of that time.
The results based on models recently adapted to the simulation of ancient climates show that the vegetation of the tropics, for a constant CO2 level, could have oscillated between tropical rainforest and open shrub forest conditions, or even desert. These local but major environmental changes are linked to the impact of precession, and to a lesser extent obliquity, on intertropical temperature gradients, allowing the intermittent establishment of a monsoon-like climate.
The international team also demonstrates that the combined impact of CO2 decrease and obliquity variations induces a fragmentation of bioclimatic corridors in Anatolia and Siberia. The biogeographic implications of these results are important, as these migratory corridors linking Europe to Asia were crucial in the migration of Asian fauna to Western Europe during the faunal dispersal event called the Grande Coupure.